Last updated June 20, 2022
Dean of Exeter
This article is about the Dean of Exeter. For the Australian rugby union player, see Arch Boyd. For the WW2 RAF flying ace, see Archie Boyd.

He officiated as curate and preacher in the cathedral in Derry from 1827 to 1842, and here he first distinguished himself as an able and powerful preacher, as a controversialist, and as an author. At that time the controversy between the presbyterians and the Church of Ireland in the north of Ireland was at its height. Boyd came to the defence of the church and preached a series of discourses in reply to attacks. These discourses attracted great attention, and were afterwards printed. In 1842, he was appointed perpetual curate of Christ Church Cheltenham. With Francis Close, his fellow-worker here, he joined in a scheme for establishing additional Sunday schools, infant schools, and bible classes. For eight years after 1859, he was entrusted with the care of Paddington. [3]

On 11 November 1867 he accepted the deanery of Exeter, and resigned, with his vicarage, an honorary canonry in Gloucester Cathedral, which he had held since 1857. He was a preaching and a working dean. He was a firm but moderate evangelical, and was a voluminous writer on the ecclesiastical questions of the day. His name is connected with the—at the time well-known—Exeter reredos case. The dean and chapter erected in the cathedral, 1872–3, a stone reredos, on which were sculptured representations in bas-relief of the Ascension, the Transfiguration, and the Descent of the Holy Ghost, with some figures of angels. In accordance with a petition presented by William John Phillpotts, chancellor of the diocese, the bishop (Frederick Temple) on 7 January 1874 declared the reredos to be contrary to law and ordered its removal. [3] After much litigation touching the bishop's jurisdiction in the matter, the structure was declared not illegal by the Judicial Committee of the Privy Council on 25 February 1875 [4]

On the continent during the autumn of 1882, Boyd met with an accident at Vienna, from the effects of which he never fully recovered. He died at the deanery, Exeter, on 11 July 1883, bequeathing nearly £40,000 to various societies and institutions in the diocese of Exeter. He left behind his wife, Frances, the daughter of Thomas Waller of Ospringe, and widow of the Rev. Robert Day Denny. She herself died on 6 January 1877. [3]

He also printed many single sermons and minor publications. [3]

Gilbert Rule was a nonconformist Church of Scotland minister and the Principal of Edinburgh University from 1690 to 1701. 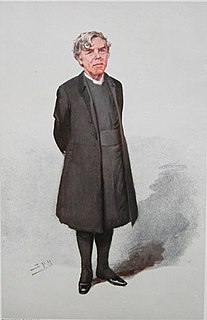 Cornelius Burges or Burgess, DD, was an English minister. He was active in religious controversy prior to and around the time of the Commonwealth of England and The Protectorate, following the English Civil War. In the years from 1640 he was a particularly influential preacher.

Henry Leslie was a Scottishman who became the Church of Ireland Bishop of Down and Connor from 1635 to 1661 and briefly Bishop of Meath from January to April 1661.

George Browne D.D. was an English Augustinian who was appointed by Henry VIII of England to the vacant Episcopal see of Dublin. He became the king's main instrument in his desire to establish the state church in the Kingdom of Ireland. An iconoclast, during the Protestant Reformation he is noted for destroying the Bachal Isu, one of the symbols of authority of the Archbishop of Armagh.

William Maskell (1814–1890) was an English priest of the Church of England and Catholic convert, known as a liturgical scholar.