Born in Falkirk, Macaulay started his playing career in junior football and joined Rangers in 1933, [3] where he became a regular at the age of only 18. Playing as an inside right, he won a Scottish Cup medal in 1935–36 and a Scottish League Championship medal the year after. In 1937 he was transferred to West Ham United for £6,000; the Second World War interrupted his career somewhat but he still won a Wartime Cup medal in 1940 and played five unofficial wartime matches for Scotland. [4]

Macaulay was signed by Brentford in October 1946, and made his official Scotland debut against England at Wembley Stadium on 12 April 1947. By this time he had been converted to a wing half, Brentford were relegated to the Second Division at the end of the 1946–47 season. Macaulay was selected to play for Great Britain in a one-off match in May 1947. [5]

He was signed by Arsenal in July 1947 for £10,000. Macaulay made his Arsenal debut against Sunderland on 23 August 1947 and in his first season with the Gunners, he played 40 league matches and won a First Division Championship medal. He continued to play for Arsenal as a near ever-present figure for the next two seasons, although he missed out on Arsenal's 1950 FA Cup triumph after manager Tom Whittaker preferred fellow Scot Alex Forbes in the final. Macaulay left Arsenal for Fulham in June 1950; in all he made 108 appearances in three seasons, scoring one goal. He also won six more caps for Scotland while at Arsenal, bringing his total tally to seven. He spent three seasons at Fulham, though he could not save them from relegation to Division Two in 1951–52. He moved to Guildford City after that, to become the club's player-manager. [4]

In 1957 he succeeded Tom Parker as manager of Norwich City, where he led the Third Division side to the FA Cup semi-finals in 1959 in one of the most famous FA Cup runs of all time, and promotion to the Second Division the following year. In 1961 he moved on to West Bromwich Albion, though the Baggies did little under his two-year reign, instead enjoying mid-table obscurity. [4]

Macaulay finished his managerial career at Brighton & Hove Albion between 1963 and 1968, leading the club to promotion from the Fourth Division in 1965. After that, he left football management completely, and later worked as a traffic warden. [6] He died in June 1993, aged 77.

Ronald Leslie Rooke was an English footballer who played as a centre forward. He scored 170 goals from 256 appearances in the Football League for Crystal Palace, Fulham and Arsenal, as well as playing non-league football. He was also manager of Crystal Palace, Bedford Town, Haywards Heath Town and Addlestone.

Alexander Rooney Forbes was a Scottish football player and manager. 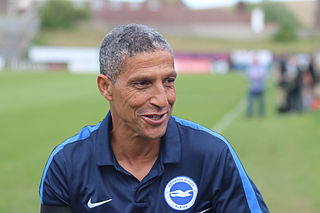 Alexander Adams Wilson was a Scottish footballer who played as a goalkeeper, mainly for Greenock Morton and Arsenal.

Paul Brooker is an English retired professional football Winger who played in the Football League, most notably for Brighton & Hove Albion. He also played league football for Brentford, Fulham, Reading and Leicester City.

Joshua Walter Sloan, commonly known as Paddy Sloan, was an Irish footballer and manager. Sloan played with English clubs such as Manchester United, Millwall, Fulham and Arsenal. He also featured for Italian sides Milan, Udinese, Torino and Brescia. Sloan as well played with clubs from Northern Ireland, Malta and Australia. He was a dual Irish international footballer as he played for both the IFA XI and the FAI XI. Sloan pioneered the way for the likes of Liam Brady and Robbie Keane by becoming the first Irishman to play in Serie A.

Ernest James Langley was an English footballer noted for his pacey, rampaging runs from the left fullback position and his long throw-ins. He is remembered particularly fondly by supporters of Fulham for his long service with the club during which he helped them achieve promotion to the First Division during the 1958–59 season; by Queens Park Rangers fans for featuring in the side which won the Third Division title and sensationally beat First Division West Bromwich Albion in the League Cup Final in the 1966–67 season and by non-league side Guildford City where he remains one of their most successful former players. Langley also enjoyed a short spell as an England international, playing three games for his country in 1958.

Barry David Lloyd is an English retired professional footballer and manager. As a player, he most notably played as a midfielder in the Football League for Fulham, for whom he was captain and made over 280 appearances for the club. He also played league football for Brentford, Hereford United and Chelsea. After his retirement as a player, Lloyd managed Brighton & Hove Albion and non-league clubs Worthing and Yeovil Town.

Neil Smillie is an English former professional football player and manager. He played for a number of clubs, with the high point of his career being an appearance in the 1983 FA Cup Final for Brighton & Hove Albion.

The 1947–48 season was the 49th completed season of The Football League.

Frank Morrad was an English professional football forward who played in the Football League, most notably for Leyton Orient and Brighton & Hove Albion.