Archon (Greek : ἄρχων, romanized: árchōn, plural: ἄρχοντες, árchontes) is a Greek word that means "ruler", frequently used as the title of a specific public office. It is the masculine present participle of the verb stem αρχ-, meaning "to be first, to rule", derived from the same root as words such as monarch and hierarchy.

In the early literary period of ancient Greece the chief magistrates of various Greek city states were called Archon. [1] The term was also used throughout Greek history in a more general sense, ranging from "club leader" to "master of the tables" at syssitia to "Roman governor".[ citation needed ] In Roman terms, archontes ruled by imperium , whereas basileis ("kings") had auctoritas .

In Athens a system of three concurrent Archons evolved, the three office holders being known as the Eponymous archon , the Polemarch , and the Archon basileus . [1] According to Aristotle's Constitution of the Athenians , the power of the king first devolved to the archons, and these offices were filled from the aristocracy by elections every ten years. During this period the Archon Eponymos was the chief magistrate, the Polemarch was the head of the armed forces, and the Archon Basileus was responsible for the civic religious arrangements. After 683 BC the offices were held for only a single year, and the year was named after the Archon Eponymos. (Many ancient calendar systems did not number their years consecutively.) Although the process of the next transition is unclear, after 487 BC the archonships were assigned by lot to any citizen and the Polemarch's military duties were taken over by a new class of generals known as strategoi . The Polemarch thereafter had only minor religious duties. The Archon Eponymos remained the titular head of state under democracy, though of much reduced political importance. The Archons were assisted by "junior Archons", called Thesmothetes. After 457 BC ex-archons were automatically enrolled as life members of the Areopagus, though that assembly was no longer extremely important politically at that time. [2]

Under the Athenian constitution, Archons were also in charge of organizing festivals by bringing together poets, playwrights, actors, and city-appointed choregai (wealthy citizen patrons). The Archon would begin this process months in advance of a festival by selecting a chorus of three playwrights based on descriptions of the projected plays. Each playwright would be assigned a choregos, also selected by the Archon, from among the wealthy citizens who would pay all the expenses of costumes, masks, and training the chorus. The Archon also assigned each playwright a principal actor (the protagonist), as well as a second and third actor. The City Dionysia, an ancient dramatic festival held in March in which tragedy, comedy, and satyric drama originated, was under the direction of one of the principal magistrates, the archon eponymos.

Byzantine historians usually described foreign rulers as archontes. [3] The rulers of the Bulgars themselves, along with their own titles, often bear the title archon placed by God in inscriptions in Greek.

Inside Byzantium, the term could be used to refer to any powerful noble or magnate, but in a technical sense, it was applied to a class of provincial governors. In the 8th and 9th centuries, these were the governors of some of the more peripheral provinces, inferior in status to the themata : Dalmatia, Cephalonia, Crete and Cyprus. Archontes were also placed in charge of various naval bases and trade stations, as well as semi-autonomous Slavic-inhabited areas ( sclaviniae ) under Byzantine sovereignty. In the 10th–12th centuries, archontes are also mentioned as the governors of specific cities. The area of an archon's jurisdiction was called an archontia (ἀρχοντία). [4] The title was also used for the holders of several financial posts, such as the head of the mint (ἄρχων τῆς χαραγῆς), as well as directors of the imperial workshops, arsenals, etc. [5]

The title of megas archon ("grand archon") is also attested, as a translation of foreign titles such as "grand prince". In the mid-13th century, it was established as a special court rank, held by the highest-ranking official of the emperor's company. It existed throughout the Palaiologan period, but did not have any specific functions. [6]

Archons of the Ecumenical Patriarchate of Constantinople

From time to time, laity of the Orthodox Church in communion with the Patriarch of Constantinople have been granted the title of Archon to honor their service to Church administration. In 1963, Archons in the United States were organized into a service society, the Order of St Andrew. This Archon status is not part of the Church hierarchy and is purely honorary.

An Archon is an honoree by His All Holiness the Ecumenical Patriarch, for his outstanding service to the Church, and a well-known, distinguished, and well-respected leader of the Orthodox Church (at large).

It is the sworn oath of the Archon to defend and promote the Orthodox Church faith and tradition. His main concern is to protect and promote the Holy Patriarchate and its mission. He is also concerned with human rights and the well-being and general welfare of the Church.

As it is a significant religious position, the faith and dedication of a candidate for the role are extensively reviewed during consideration; the candidate should have demonstrated commitment for the betterment of the Church, Parish-Diocese, Archdiocese and the community as a whole.

"Archon" is also used in Modern Greek colloquially, as άρχοντας (archontas) to someone that holds a form of status, or power [7]

The term is used within the Arab-speaking Copts in church parlance as a title for a leading member of the laity.[ citation needed ]

Various fraternities and sororities use the title of archon or variations on it.[ citation needed ]

Some Gnostic sects used this term for demons associated with the planetspheres. 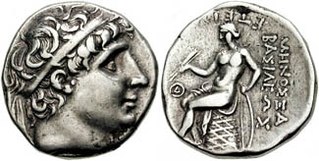 Basileus is a Greek term and title that has signified various types of monarchs in history. In the English-speaking world it is perhaps most widely understood to mean "king" or "emperor". The title was used by sovereigns and other persons of authority in ancient Greece, the Byzantine emperors, and the kings of modern Greece.

Ethnarch, pronounced, the anglicized form of ethnarches, refers generally to political leadership over a common ethnic group or homogeneous kingdom. The word is derived from the Greek words ἔθνος and ἄρχων. Strong's Concordance gives the definition of 'ethnarch' as "the governor of a district."

Archon basileus was a Greek title, meaning "king magistrate": the term is derived from the words archon "magistrate" and basileus "king" or "sovereign".

In ancient Greece the chief magistrate in various Greek city states was called eponymous archon. Archon means "ruler" or "lord", frequently used as the title of a specific public office, while "eponymous" means that he gave his name to the year in which he held office, much like the Roman dating by consular years. 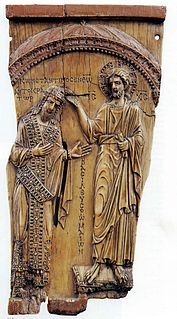 Autokratōr is a Greek epithet applied to an individual who is unrestrained by superiors. It has been applied to military commanders-in-chief as well as Roman and Byzantine emperors as the translation of the Latin title imperator. Its connection with Byzantine-style absolutism gave rise to the modern terms autocrat and autocracy. In modern Greek, it means "emperor", and its feminine form is autokrateira.

The vestiarion, sometimes with the adjectives basilikon ("imperial") or mega ("great"), was one of the major fiscal departments of the Byzantine bureaucracy. In English, it is often known as the department of the Public Wardrobe. Originating from the late Roman palace office of the sacrum vestiarium, it became an independent department in the 7th century under a chartoularios. By the late Byzantine period, it had become the state's sole treasury department. The public vestiarion must not be confused with the Byzantine emperor's private wardrobe, the oikeiakon vestiarion, which was headed by the prōtovestiarios.

John Apokaukos was a Byzantine churchman and theologian. Having studied at Constantinople, he became bishop of Naupaktos and played a major role in the rivalry between the Epirote Church and the Ecumenical Patriarchate, exiled in the Empire of Nicaea.

Leo of Chalcedon was an 11th-century Eastern Orthodox bishop of Chalcedon who opposed the appropriation of church treasures by Byzantine emperor Alexios I Komnenos between 1081 and 1091.

Strategos or strategus, plural strategoi, is used in Greek to mean military general. In the Hellenistic world and the Byzantine Empire the term was also used to describe a military governor. In the modern Hellenic Army it is the highest officer rank.

The Church of the Holy Apostles is a 14th-century Byzantine church in the northern Greek city of Thessaloniki.

Michael IV Autoreianos, was the Patriarch of Constantinople from 1206 to his death in 1212.

Germanus II Nauplius, was Patriarch of Constantinople from 1223 until his death in June 1240.

The Serbian monarchs and royalty have assumed several regnal titles and styles throughout history. 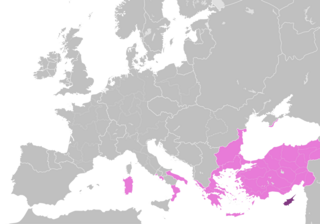 The Theme of Cyprus was a Byzantine military-civilian province, located in the island of Cyprus, established in the 960s after the reconquest of Cyprus by the Byzantine navy. Prior to this the island had been a Byzantine-Arab condominium for three centuries, except occasional short periods where it was occupied by either power. A rebellion by governor Theophilos Erotikos in 1042, and another in 1092 by Rhapsomates, failed as they were quickly subdued by imperial forces. At the end of the 12th century there were again separatist tendencies in Cyprus: Isaac Komnenos of Cyprus proclaimed himself as "basileus" (emperor) in 1185. Cyprus remained under his command until its conquest in 1191 during the Third Crusade by Richard I of England, who sold it to the Knights Templars.

Theodore II Eirenikos, , also known as Theodore Kopas or Koupas (Κωπάς/Κουπάς), was a high-ranking Byzantine official and chief minister during most of the reign of the Byzantine emperor Alexios III Angelos. After the fall of Constantinople to the Fourth Crusade, he fled to the Empire of Nicaea, where he became a monk and served as Patriarch of Constantinople in exile in 1214–1216.

Toparchēs, anglicized as toparch, is a Greek term for a governor or ruler of a district and was later applied to the territory where the toparch exercised his authority. In Byzantine times came to be applied to independent or semi-independent rulers in the periphery of the Byzantine world.

Skeuophylax, feminine form skeuophylakissa (σκευοφυλάκισσα), meaning "keeper of the vessels", is an ecclesiastical office in the Eastern Orthodox Church.

The dēmarchos, anglicized as Demarch, is a title historically given to officials related to civic administration. In ancient Athens the title was given to the elected chief magistrate of each of the demes of Attica. In later literature, the term was used as a translation of the Roman office of tribunus plebis. In the Byzantine Empire the dēmarchos was the leader of one of the racing factions of the Hippodrome of Constantinople. Largely concerned with ceremonial in the early centuries, from the 11th century the title was applied to various administrative positions in Constantinople, until the end of the empire. In modern usage, the term is used for the mayor of a municipality.

In the Eastern Orthodox Church, the endemic synod or endemousa synodos was the permanent standing synod of bishops of the Patriarchate of Constantinople that met frequently but irregularly to deal with issues of discipline and dogma. It was convoked and presided over by the patriarch.