Ardtalnaig[ pronunciation? ] (Gaelic: Àird Talanaig) is a hamlet on the south shore of Loch Tay in Perth and Kinross in Scotland. It is approximately 6 miles (10 km) from Kenmore in whose parish it lies. [1]

Loch Tay is a freshwater loch in the central highlands of Scotland, in the Perth and Kinross and Stirling council areas. The watershed of Loch Tay traditionally formed the historic province of Breadalbane.

Tay may refer to: 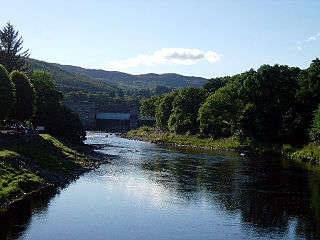 Acharn is a hamlet in the Kenmore parish of the Scottish council area of Perth and Kinross. It is situated on the south shore of Loch Tay close to its eastern end. The hamlet was built in the early 19th century to house workers from the surrounding estates. A mill was constructed to harness the power of the nearby Acharn Burn, and this was converted into a craft centre in the 1970s but is not one anymore. There is a bridge in the middle that goes over the Acharn burn. 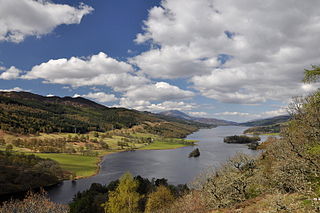 Loch Tummel is a long, narrow loch, 7 kilometres north west of Pitlochry in the council area of Perth and Kinross, Scotland. It is fed and drained by the River Tummel, which flows into the River Tay about 4 km west of the Clunie Dam at the loch's western end. 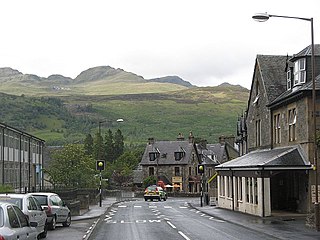 Lawers is a village situated in rural Perthshire, Scotland. It lies on the banks of Loch Tay and at the foot of Ben Lawers. It was once part of a vibrant farming industry in the area.

Fearnan is a small crofting village on the north shore of Loch Tay in Perthshire, Scotland.

Ardeonaig is a hamlet on the southern shore of Loch Tay in the Stirling Council area of Scotland. It is approximately 7 miles east of Killin and lies at the mouth of the Ardeonaig Burn where it enters Loch Tay.

The Killin Railway was a locally promoted railway line built to connect the town of Killin to the Callander and Oban Railway main line nearby. It opened in 1886, and carried tourist traffic for steamers on Loch Tay as well as local business. The directors and the majority of the shareholders were local people, and the little company retained its independence until 1923. 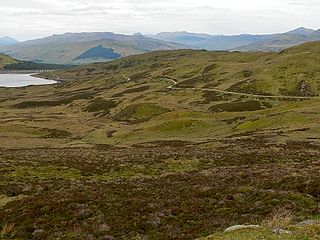 The Rob Roy Way is a Scottish long distance footpath that runs from Drymen in Stirling to Pitlochry in Perth and Kinross. The path was created in 2002, and takes its name from Rob Roy MacGregor, a Scottish folk hero and outlaw of the early 18th century. It traverses countryside that he knew and travelled frequently. The route crosses the Highland Boundary Fault, a geological fault where the Highlands meet the Lowlands. Views from the trail overlook Loch Lubnaig, Loch Earn, Loch Venachar and Loch Tay. The way is 127 kilometres (79 mi) in length if the direct route along the southern shore of Loch Tay and the River Tay is followed between Ardtalnaig and Aberfeldy. A optional loop also link these places via Amulree: choosing this option increases the length by a further 27 kilometres (17 mi) to 154 kilometres (96 mi).