The Arid Diagonal (Spanish: diagonal árida/arreica) is a contiguous zone of arid and semi-arid climate that traverses South America from coastal Peru in the Northwest to Argentine Patagonia in Southeast including large swathes of Bolivia and Chile. [1] The Arid Diagonal encompasses a number of deserts, for example: Sechura, Atacama, Monte and the Patagonian Desert.

The Arid Diagonal acts to isolate the temperate and subtropical forests of Chile and southern Argentina from other forests of South America. [2] Together with the Quaternary glaciations in the Southern Andes, the diagonal has controlled the distribution of vegetation throughout Chile and Argentina. [3]

The concept of a South American Arid Diagonal was first coined by French geographer Emmanuel de Martonne in his 1935 work Problème des régions arides Sud-Américaines. [4] However, few works dealing with the Arid Diagonal mention this foundational text. [4] The original Arid Diagonal of de Martonne went from Antofagasta in northern Chile to the northern coast of Argentine Patagonia. [4] however, other authors like Margarita González Loyarte (1995) later extended it to the coast of northern Peru. [4]

The northern portion of the Arid Diagonal is a result of the blocking of the trade winds by the barrier formed by the Central Andes and the South Pacific High. [5] To the south in the westerlies, the rain shadow that the Southern Andes casts over eastern Patagonia similarly blocks moisture. [1] South of Mendoza (32°53' S), the driest parts of the diagonal move away from the Andes as the mountains lose height, causing some humidity to penetrate; thus, at more southern latitudes the driest parts of the diagonal lie on the Atlantic coast of Patagonia. [1]

The Arid Diagonal has existed since the Neogene. [3] The origin of the aridity of northern part of the diagonal is linked to two geologic events: a) the rise of the Andes — an event that led to the permanent block of both the westward flow of moisture along the tropics, and the eastward flow of moisture in Patagonia [6] and b) the permanent intrusion of cold Antarctic waters (the Humboldt Current) along South America's west coast. [5] Together with the Quaternary glaciations in the Southern Andes, the diagonal controls the distribution of the vegetation types over Chile and Argentina. [3]

Patagonia refers to a geographical region that encompasses the southern end of South America, governed by Argentina and Chile. The region comprises the southern section of the Andes Mountains, lakes, fjords, and glaciers in the west and deserts, tablelands and steppes to the east. Patagonia is bounded by the Pacific Ocean on the west, the Atlantic Ocean to the east, and many bodies of water that connect them, such as the Strait of Magellan, the Beagle Channel, and the Drake Passage to the south. 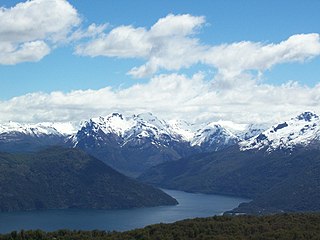 Chubut is a province in southern Argentina, situated between the 42nd parallel south, the 46th parallel south, the Andes range to the west, and the Atlantic ocean to the east. The province's name derives from the Tehuelche word chupat, meaning "transparent," their description of the Chubut River. 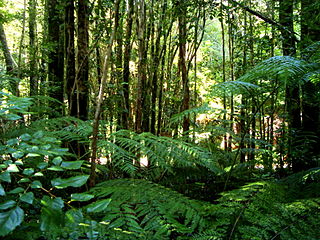 Viedma is a subglacial volcano whose existence is questionable. It is supposedly located below the ice of the Southern Patagonian Ice Field, an area disputed between Argentina and Chile. The 1988 eruption deposited ash and pumice on the ice field and produced a mudflow that reached Viedma Lake. The exact position of the edifice is unclear, both owing to the ice cover and because the candidate position, the "Viedma Nunatak", does not clearly appear to be of volcanic nature.

The Patagonian Ice Sheet was a large elongated and narrow ice sheet centered in the southern Andes that existed during the Llanquihue glaciation. The ice sheet covered all of Chile south of Puerto Montt plus the western fringes of Argentine Patagonia.

The Northern Patagonian Ice Field, located in southern Chile, is the smaller of two remnant parts in which the Patagonian Ice Sheet in the Andes Mountains of southern South America can be divided. It is completely contained within the boundaries of Laguna San Rafael National Park. 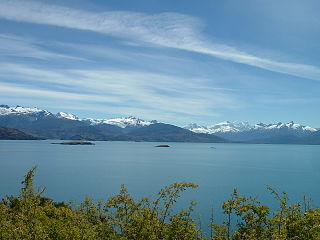 General Carrera Lake or Lake Buenos Aires is a lake located in Patagonia and shared by Argentina and Chile. Both names are internationally accepted, while the autochthonous name of the lake is Chelenko, which means "stormy waters" in Aonikenk.

The Patagonian Desert, also known as the Patagonian Steppe, is the largest desert in Argentina and is the 8th largest desert in the world by area, occupying 673,000 square kilometers (260,000 mi2). It is located primarily in Argentina and is bounded by the Andes, to its west, and the Atlantic Ocean to its east, in the region of Patagonia, southern Argentina. To the north the desert grades into the Cuyo Region and the Monte. The central parts of the steppe are dominated by shrubby and herbaceous plant species albeit to the west, where precipitation is higher, bushes are replaced by grasses. Topographically the deserts consist of alternating tablelands and massifs dissected by river valleys and canyons. The more western parts of the steppe host lakes of glacial origin and grades into barren mountains or cold temperate forests along valleys.

The climate of Chile comprises a wide range of weather conditions across a large geographic scale, extending across 38 degrees in latitude, making generalizations difficult. According to the Köppen system, Chile within its borders hosts at least seven major climatic subtypes, ranging from low desert in the north, to alpine tundra and glaciers in the east and southeast, tropical rainforest in Easter Island, Oceanic in the south and Mediterranean climate in central Chile. There are four seasons in most of the country: summer, autumn, winter, and spring. 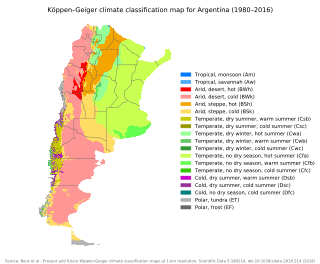 The climate of Argentina varies from region to region, as the vast size of the country and wide variation in altitude make for a wide range of climate types. Summers are the warmest and wettest season in most of the country except in most of Patagonia where it is the driest season. Winters are normally mild in the north, cool in the center and cold in the southern parts experiencing frequent frost and snow. Because southern parts of the country are moderated by the surrounding oceans, the cold is less intense and prolonged than areas at similar latitudes in the northern hemisphere. Spring and autumn are transition seasons that generally feature mild weather. 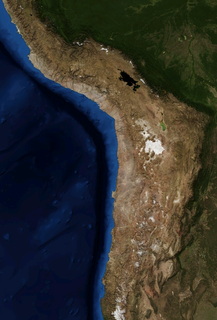 The Atacama Desert is a desert plateau in South America covering a 1,600 km (990 mi) strip of land on the Pacific coast, west of the Andes Mountains. The Atacama Desert is the driest nonpolar desert in the world, as well as the only true desert to receive less precipitation than the polar deserts and the largest fog desert in the world. Both regions have been used as experimentation sites on Earth for Mars expedition simulations. The Atacama Desert occupies 105,000 km2 (41,000 sq mi), or 128,000 km2 (49,000 sq mi) if the barren lower slopes of the Andes are included. Most of the desert is composed of stony terrain, salt lakes (salares), sand, and felsic lava that flows towards the Andes.

Reclus, also written as Reclús, is a volcano located in the Southern Patagonian Ice Field, Chile. Part of the Austral Volcanic Zone of the Andes, its summit rises 1,000 metres (3,300 ft) above sea level and is capped by a crater about 1 kilometre (0.62 mi) wide. Close to the volcano lies the Amalia Glacier, which is actively eroding Reclus.

The Boundary Treaty of 1881 between Argentina and Chile was signed on 23 July 1881 in Buenos Aires by Bernardo de Irigoyen, on the part of Argentina, and Francisco de Borja Echeverría, on the part of Chile, with the aim of establishing a precise and exact border between the two countries based on the uti possidetis juris principle. Despite dividing largely unexplored lands, the treaty laid the groundwork for nearly all of Chile's and Argentina's 5600 km current border. 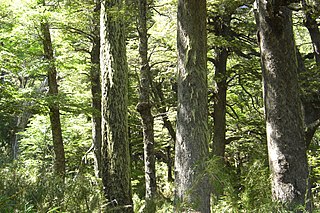 The Bosque Andino Patagónico is a type of temperate to cold forest located in southern Chile and western Patagonia in Argentina at the southern end of South America. The climate here is influenced by humid air masses moving in from the Pacific Ocean which lose most of their moisture as they rise over the Andes. The flora is dominated by trees, usually of the genus Nothofagus.

The Magellanic moorland or Magellanic tundra is an ecoregion on the Patagonian archipelagos south of latitude 48° S. It is characterized by high rainfall with a vegetation of scrubs, bogs and patches of forest in more protected areas. Cushion plants, grass-like plants and bryophytes are common.