The Arizona League Rangers (or AZL Rangers) are a Minor League Baseball team of the Arizona League and a Rookie level affiliate of the Texas Rangers. They are located in Surprise, Arizona, and play their home games at Surprise Stadium which opened in 2003.

The Arizona League is a rookie-level Minor League Baseball league that operates in and around Phoenix, Arizona, United States, run by Major League Baseball since 1988. Along with the Gulf Coast League, it forms the lowest rung of the North American minor league system. Games are not marketed to the general public, and spectators may attend for free.

The Gulf Coast League is a rookie-level Minor League Baseball league that operates in Florida, United States. Together with the Arizona League, it forms the lowest rung on the North American minor-league ladder. 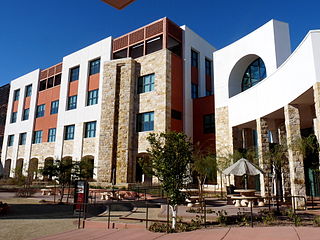 Surprise is a city in Maricopa County, in the U.S. state of Arizona. The population was 30,848 at the 2000 census; however, rapid expansion has boosted the city's population to 117,517 at the 2010 census, an increase of 281%. As such, it is the second-fastest-expanding municipality in the greater Phoenix metropolitan area and, between 1990 and 2000, it was the sixth-fastest-expanding place among all cities and towns in Arizona. Census estimates in 2017 continue this accelerated growth pattern, with the population now estimated at 134,085.

Surprise Stadium is a baseball venue located at the Surprise Recreation Campus athletic facility in Surprise, Arizona, United States. The stadium opened in 2002 and seats 10,714 people. It is the spring training facility for the Kansas City Royals and the Texas Rangers. It is also the home of the Arizona Fall League's Surprise Saguaros. The venue was previously the home of the Golden Baseball League's Surprise Fightin' Falcons, which disbanded after their only season in 2005. Surprise Stadium is owned and managed by the City of Surprise Community and Recreation Services Department.

The Surprise Fightin' Falcons are an inactive professional baseball team based in Surprise, Arizona. They played in the Arizona Division of the independent Golden Baseball League, which is not affiliated with either Major League Baseball or Minor League Baseball. They played their homes games at the Surprise Recreation Campus athletic facility, which includes a spring training ballpark called Surprise Stadium.

The Denver Rangers were a professional hockey team in Denver, Colorado for 1988–1989 season. They were a member of the International Hockey League. The team was originally the Indianapolis Checkers, but after the 1986–1987 season the team moved to Denver. The team was originally known as the Colorado Rangers for the 1987–1988 season. After the 1988–1989 season the team moved to Phoenix, Arizona and became known as the Phoenix Roadrunners. They were the IHL affiliate of the New York Rangers.

Ranger most often refers to:

The Salt River Rafters are a baseball team that plays in the East Division of the Arizona Fall League. They play their home games at Salt River Fields at Talking Stick near Scottsdale, Arizona.

The Surprise Recreation Campus is an athletic facility based in Surprise, Arizona. It features such amenities as Surprise Stadium, 12 baseball fields, and an 8-acre (32,000 m2) multipurpose field (lighted). The facility at one time played host to an independent professional baseball team, the Golden Baseball League's Surprise Fightin' Falcons and currently host a minor league baseball team, the Surprise Rafters of the Arizona Fall League.

Carlos Ingver Subero is a Venezuelan professional baseball coach and former player. He previously served as first base and infield coach for the Milwaukee Brewers. 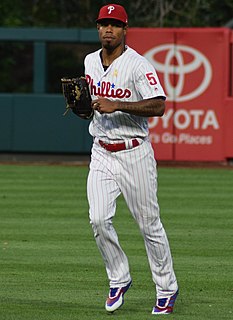 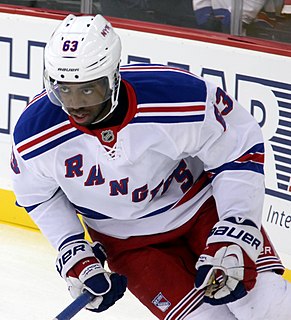 Anthony Duclair is a Canadian professional ice hockey forward for the Ottawa Senators of the National Hockey League (NHL). Duclair was selected by the New York Rangers in the third round, 80th overall, of the 2013 NHL Entry Draft, the organization with which he began his NHL career. Duclair has also played in the NHL for the Arizona Coyotes, Chicago Blackhawks and Columbus Blue Jackets.

Jayce Michael Tingler is an American professional baseball manager for the San Diego Padres of Major League Baseball (MLB). He previously served as the major league player development field coordinator and assistant general manager for the Texas Rangers. He played college baseball for the Missouri Tigers.

Christian Devont'a Pelham is an American professional baseball relief pitcher for the Chicago Cubs of Major League Baseball (MLB). He has played in MLB for the Texas Rangers.