The arlabecca (Old Occitan  [aɾlaˈbɛka] ) was a genre of Old Occitan lyric poetry. First mentioned in an ensenhamen by Peire Lunel, the genre was supposed by François Raynouard to be a lament or dirge, and Emil Levy thought it a "kind of poetry". It may derive from the Galician-Portuguese term for a rebec, arrabecca. The term rebec (plural rebecz) can be found in Old Occitan references to both an instrument and a genre (as in the Leys d'amors , where it is undefined). Possibly the rebec is the same genre as the arlabecca. Lunel defined his arlabecca by its metre, and thus his ensenhamen was an arlabecca as well. 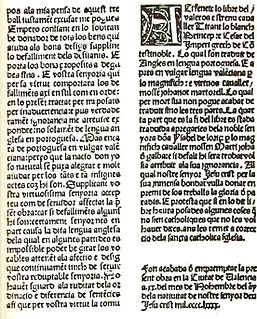 Shuadit, also called Judæo-Occitan or less accurately Judæo-Provençal or Judæo-Comtadin, is the Occitan dialect historically spoken by French Jews in the South of France. Though written in Hebrew script, the dialect was mutually intelligible with the Occitan spoken by non-Jews.

The partimen is a cognate form of the French jeu-parti. It is a genre of Occitan lyric poetry composed between two troubadours, a subgenre of the tenso or cobla exchange in which one poet presents a dilemma in the form of a question and the two debate the answer, each taking up a different side. Of the nearly 200 surviving Occitan debate songs, 120 are partimens and 75 are open tensos. The partimen was especially popular in poetic contests. See also Torneyamen.

The alba is a genre of Old Occitan lyric poetry. It describes the longing of lovers who, having passed a night together, must separate for fear of being discovered.

Raimon Vidal de Bezaudu(n) was a Catalan troubadour from Besalù. He is notable for authoring the first tract in a Romance language (Occitan) on the subject of grammar and poetry, the Razós de trobar, a title which translates as "Reasons of troubadour composition". He began his career as a joglar and he spent his formative years at the court of Hug de Mataplana, which he often recalls fondly in his poems and songs.

A cobla esparsa in Old Occitan is the name used for a single-stanza poem in troubadour poetry. They constitute about 15% of the troubadour output, and they are the dominant form among late authors like Bertran Carbonel and Guillem de l'Olivier. The term cobla triada is used by modern scholars to indicate a cobla taken from a longer poem and let stand on its own, but its original medieval meaning was a cobla esparsa taken from a larger collection of such poems, since coblas esparsas were usually presented in large groupings.

Amanieu de Sescars or Amanieu des Escàs was a Catalan, possibly Gascon, troubadour of the late 13th century. Famous for his love songs in his own day, his contemporaries gave him the nickname dieu d'amor. He wrote two ensenhamens and two saluts d'amor that survive.

Arnaut Guilhemde Marsan was a Landais nobleman and troubadour. He was descended from a cadet branch of the viscounts of Marsan and was himself lord of Roquefort and Montgaillard and co-lord of Marsan.

Hachmei Provence refers to the Jewish rabbis of Provence, a province in Occitania that was a great Torah center in the times of the Tosafists. The phrase literally means the wise ones of Provence; hakham "wise one, sage" is a Sephardic and Hachmei Provençal term for a rabbi.

An ensenhamen was an Old Occitan didactic poem associated with the troubadours. As a genre of Occitan literature, its limits have been open to debate since it was first defined in the 19th century. The word ensenhamen has many variations in old Occitan: essenhamen, ensegnamen, enseinhamen, and enseignmen.

Peire Lunel de Montech, also known as Cavalier Lunel or Peire de Lunel, was a lawyer, politician and author of Toulouse. His name indicates he was a knight from Montech.

Raimon de Cornet was a fourteenth-century Toulousain priest, friar, grammarian, poet, and troubadour. He was a prolific author of verse; more than forty of his poems survive, most in Occitan but two in Latin. He also wrote letters, a didactic poem, a grammar, and some treatises on computation. He was the "last of the troubadours" and represented l'esprit le plus brillant of the "Toulousain School". He appears in contemporary documents with the titles En and Frare.

A dansa, also spelt dança, was an Old Occitan form of lyric poetry developed in the late thirteenth century among the troubadours. It is related to the English term "dance" and was often accompanied by dancing. A closely related form, the balada or balaresc, had a more complex structure, and is related to the ballade but unrelated to the ballad. Both terms derive from Occitan words for "to dance": dansar and balar/ballar.

Guerau III de Cabrera, also called Guirautde Cabreira, was a Catalan nobleman and Occitan troubadour. He was the viscount of Àger and Cabrera from 1145. He was the son of Ponç II de Cabrera and Sancha.

The devinalh, was a genre of Old Occitan lyric poetry practiced by some troubadours. It takes the form of a riddle, or series of riddles or cryptograms and is, if read literally, mostly nonsensical. Known practitioners include Guilhen de Peiteu, Raimbaut of Orange, Giraut de Bornelh, Guilhem Ademar, Guilhem de Berguedan and Raimbaut de Vaqueiras.