Last updated July 13, 2021
American actress
Not to be confused with Aaron Sorkin.

Arleen Sorkin (born October 14, 1955) [1] is a retired [ citation needed ] American actress, screenwriter, presenter and comedian. Sorkin is known for portraying Calliope Jones on the NBC daytime serial Days of Our Lives and for inspiring and voicing the DC Comics villain Harley Quinn in Batman: The Animated Series and the many animated series and video games that followed it. [2] [3]

Born in Washington, D.C., [1] Sorkin began her career in cabaret in the late 1970s and early 1980s as a member of the comedy group The High-Heeled Women, alongside Mary Fulham, Tracey Berg, and Cassandra Danz.[ citation needed ] Sorkin is Jewish. [4] [ better source needed ]

From 1987 to 1989, Sorkin had the role of Geneva, a sexy maid to yuppie couple Richard and Linda Phillips, on the Fox dramedy series Duet . She would reprise this role on one episode of Open House , the sequel series to Duet. In 1990, she went on to be the original female co-host on America's Funniest People . She also wrote for Tiny Toon Adventures .

In 1992, Sorkin was dismissed from America's Funniest People by Vin Di Bona. In response, Sorkin filed a lawsuit against Di Bona, claiming she was dismissed from the show due to her race, after ABC Chairman Dan Burke had suggested to Di Bona that Sorkin be replaced by an African-American or a person of another ethnic minority. Sorkin sought $450,000 for lost earnings, and an additional unspecified amount for harm to her professional reputation and emotional injury. She additionally claimed that after she denounced the move as being racially motivated, Di Bona changed plans and hired new cohost Tawny Kitaen, who is also white. [5]

One of her more prominent roles was the wacky but lovable Calliope Jones, as seen on Days of Our Lives . She played this part from 1984 to 1990 and made return visits in 1992 and 2001. She reprised her role on the soap for the fourth time on February 24, 2006. She returned to Days for a limited run beginning on May 5, 2010.[ citation needed ]

She provided inspiration for and voiced the animated character Harley Quinn, the Joker's jester sidekick and lover, created by Paul Dini, a college friend of Sorkin's who created Harley for the DC Comics TV series Batman: The Animated Series . [6] [7] Harley went on to appear in DC comic books and in further animated TV series including The New Batman Adventures , Static Shock , and Justice League , as well as Gotham Girls , an internet cartoon series. Sorkin also voiced Harley in the animated film Batman Beyond: Return of the Joker and multiple video games. Following DC Universe Online , Sorkin retired from voicing Harley Quinn[ citation needed ] and therefore did not reprise her role in any subsequent DC projects. Sorkin was succeeded by several voice actresses, usually Tara Strong or Hynden Walch, in various media.

For the series Frasier , produced by her husband Christopher Lloyd, Sorkin would perform as a caller to Frasier Crane's radio show; the lines would later be dubbed over by a celebrity caller. [8] In the final episode of Frasier, Sorkin had an onscreen part as the owner of a monkey.

Since 1999, Sorkin has been married to television writer-producer Christopher Lloyd with whom she has two sons, [9] Eli and Owen. [10]

Harley Quinn is a fictional character appearing in media published by DC Entertainment. Created by Paul Dini and Bruce Timm to serve as a new supervillainess and a romantic interest for the Joker in Batman: The Animated Series on September 11, 1992, she was later adapted into DC Comics' Batman comic book canon, beginning with the one-shot Batman: Harley Quinn #1.

Justice League is an American animated television series which ran from 2001 to 2004 on Cartoon Network. It is the seventh series of the DC Animated Universe. The show was produced by Warner Bros. Animation. It is based on the Justice League of America and associated comic book characters published by DC Comics. It serves as a prequel to Batman Beyond and as a sequel to Batman: The Animated Series,Superman: The Animated Series and The New Batman Adventures. After two seasons, the series was rebranded as Justice League Unlimited, a successor series which aired for three seasons. 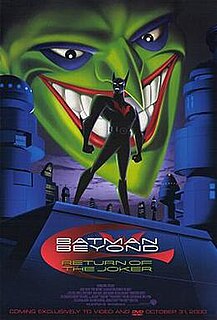 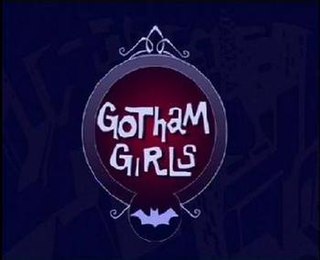 Gotham Girls is an American Flash animated web series focusing on several of the female characters of Gotham City, created and produced jointly by Warner Bros. Animation and Noodle Soup Productions. The web series, which ran from 2000 to 2002, starred Harley Quinn, Poison Ivy, Batgirl, Catwoman, Renee Montoya and Zatanna in short stories of varying length about the daily lives of the characters.

The Batman Adventures: Mad Love is a one-shot comic book written by Paul Dini and Bruce Timm. Set in the continuity of Batman: The Animated Series, it won an Eisner Award for "Best Single Story" in 1994. It was later adapted as an episode of the animated series The New Batman Adventures. 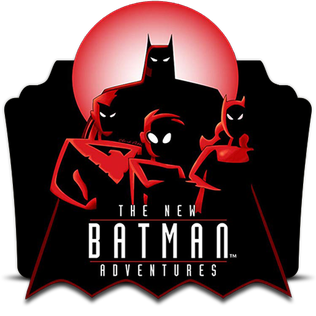 The New Batman Adventures is an American superhero animated television series based on the DC Comics superhero Batman, the third series in the DC Animated Universe and a continuation of the 1990s Batman: The Animated Series. It was produced by Warner Bros. Animation and aired on Kids' WB from September 13, 1997 to January 16, 1999.

Christopher Lloyd is an American television screenwriter and producer. Lloyd is the co-creator and executive producer of the ABC mockumentary family sitcom Modern Family, which he co-created and produced with Steven Levitan. Lloyd has had an extensive career on many series, primarily Frasier.

The Joker, the archenemy of the fictional superhero Batman, has appeared in various media. WorldCat records over 250 productions featuring the Joker as a subject, including films, television series, books, and video games. Live-action films featuring the character are typically the most successful.

Representations or analogues of one or more of the nine Muses of Greek mythology have appeared in many different modern fictional works. 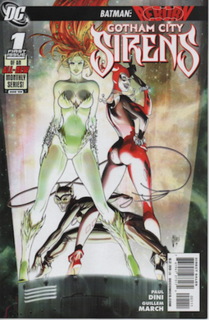 Gotham City Sirens is an American comic book series that was written by Paul Dini with art by Guillem March and published by DC Comics. The term Gotham City Sirens refers to three of the most popular female villains inhabiting Gotham City: Catwoman, Harley Quinn, and Poison Ivy. 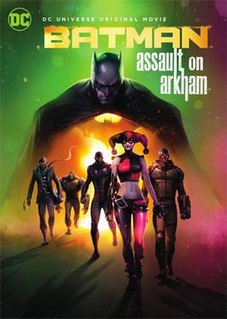 Batman: Assault on Arkham is a 2014 direct-to-video animated superhero film that is part of the DC Universe Animated Original Movies. Jay Oliva and Ethan Spaulding direct, with a script by Heath Corson, and James Tucker producing. The film was screened at the 2014 San Diego Comic-Con International on July 25, 2014, and it was released digitally on July 29 and on physical media on August 12. 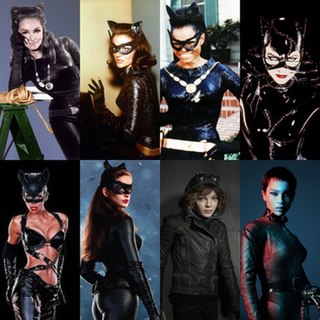 Catwoman is a fictional character first appearing in Batman #1. After her debut she would appear in many forms of media appearing in the Batman TV series and its film adaption, Batman Returns, the critically acclaimed Batman: The Animated Series, the critically panned film Catwoman, the critical and financial hit film The Dark Knight Rises, the upcoming 2022 film The Batman, and the popular Batman: Arkham series, among others. 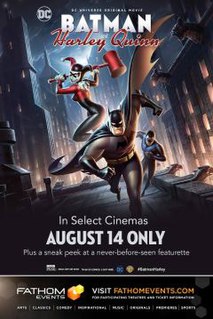 Batman and Harley Quinn is a 2017 American animated superhero film produced by Warner Bros. Animation and distributed by Warner Bros. Home Entertainment. It is the twenty-ninth film in the DC Universe Animated Original Movies series, and is directed by Sam Liu and written by Jim Krieg and Bruce Timm. It premiered on July 21, 2017 at San Diego Comic-Con International and was released into participating theaters for one night only on August 14, 2017. The film was released on digital on August 15, 2017 and on DVD and Blu-ray on August 29.

Dark Night: A True Batman Story is an American graphic novel written by Paul Dini, illustrated by Eduardo Risso, and published by DC Comics under its mature-readers Vertigo imprint. Featuring the superhero Batman, it is based upon a true incident from 1993, in which Dini was mugged and nearly killed. The book was released on June 15, 2016 and received widespread critical acclaim from reviewers, who praised its emotional story, artwork, and powerful message. 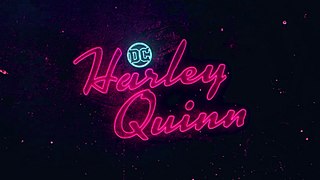 Harley Quinn is an American adult animated superhero television series based on the DC Comics character of the same name created by Paul Dini and Bruce Timm. The series is written and executive produced by Justin Halpern, Patrick Schumacker, and Dean Lorey and follows the misadventures of Harley Quinn and her friend Poison Ivy after leaving her boyfriend, the Joker. The show premiered on DC Universe to critical success on November 29, 2019, with critics praising its animation, humor, dark tone and voice acting. 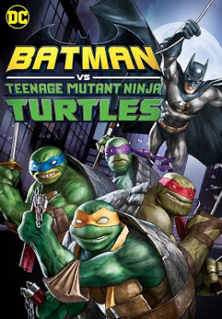 Batman vs. Teenage Mutant Ninja Turtles is a 2019 animated superhero film, directed by Jake Castorena, written by Marly Halpern-Graser, and produced by Warner Bros. Animation, DC Entertainment, and Nickelodeon Animation Studio. The film is an adaptation of the six-issue intercompany crossover comic book miniseries Batman/Teenage Mutant Ninja Turtles by James Tynion IV and Freddie Williams II. The story focuses on Batman, Robin and Batgirl teaming up with the Teenage Mutant Ninja Turtles, in order to save Gotham City from chaos at the hands of both Shredder and Ra's al Ghul. The film features the voices of Troy Baker, Darren Criss, Eric Bauza, Cas Anvar and Andrew Kishino.

Dr. Harleen Frances Quinzel, later known as Harley Quinn, is a fictional character in the DC Extended Universe, based on the character of the same name from DC Comics. Portrayed by actress Margot Robbie, she first appears in film in Suicide Squad, playing a major role, and also stars in Birds of Prey. She is first depicted as Joker's psychiatrist in prison, then later his lover and partner in crime, before going off on her own misadventures in her DCEU appearances. Her introduction sequence in Suicide Squad mentions her as an accomplice and directly responsible for the murder of Batman's sidekick Robin.

The fictional character Poison Ivy was created by Robert Kanigher and Sheldon Moldoff and first appeared in Batman #181, but has since been substantially adapted from the comics into various forms of media, such as feature films, television series and video games. Uma Thurman portrayed the character in Batman & Robin, and Clare Foley, Maggie Geha, and Peyton List played her in Gotham. She has also been voiced by Diane Pershing in the DC Animated Universe, Piera Coppola on The Batman animated series, Tasia Valenza for the Batman: Arkham video game franchise, Riki Lindhome in The Lego Batman Movie, and Lake Bell in Harley Quinn.