The Armée des émigrés (English: Army of the Émigrés) were counter-revolutionary armies raised outside France by and out of royalist émigrés, with the aim of overthrowing the French Revolution, reconquering France and restoring the monarchy. These were aided by royalist armies within France itself, such as the Chouans, and by allied countries such as Great Britain. They fought, for example, at the sieges of Lyon and Toulon. 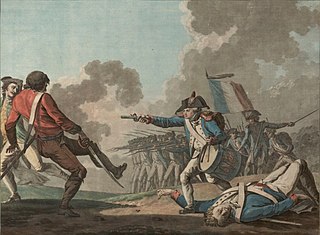 The Legitimists are royalists who adhere to the rights of dynastic succession to the French crown of the descendants of the eldest branch of the Bourbon dynasty, which was overthrown in the 1830 July Revolution. They reject the claim of the July Monarchy of 1830–1848 which placed Louis Philippe, Duke of Orléans head of the Orléans cadet branch of the Bourbon dynasty on the throne until he too was dethroned and driven with his family into exile.

They were formed from: 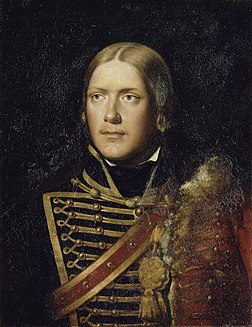 The Régiment des Hussards de Saxe was a cavalry unit set up in France under the Ancien Régime in 1741 as the Chasseurs de Fischer.

Even Napoleon I said of them "True, they are paid by our enemies, but they were or should have been bound to the cause of their King. France gave death to their action, and tears to their courage. All devotion is heroic".[ citation needed ]

Raised in Germany in 1792, at Trier, and commanded by marshals de Broglie and de Castries, under the aegis of Louis XVI's brothers, the comte de Provence and duc d'Artois. 10,000 strong, it returned to France beside the army of Brunswick and was dismissed on 24 November 1792, two months after the French victory at Valmy. 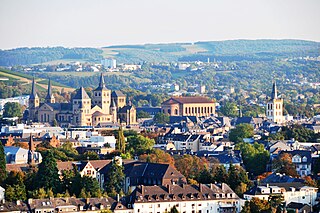 Trier, formerly known in English as Treves and Triers, is a city on the banks of the Moselle in Germany. It lies in a valley between low vine-covered hills of red sandstone in the west of the state of Rhineland-Palatinate, near the border with Luxembourg and within the important Moselle wine region. Karl Marx, philosopher and founder of the theory that would become known as Marxism, was born in the city in 1818. 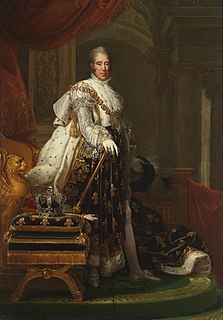 Charles X was King of France from 16 September 1824 until 2 August 1830. For most of his life he was known as the Count of Artois. An uncle of the uncrowned Louis XVII and younger brother to reigning kings Louis XVI and Louis XVIII, he supported the latter in exile. After the Bourbon Restoration in 1814, Charles became the leader of the ultra-royalists, a radical monarchist faction within the French court that affirmed rule by divine right and opposed the concessions towards liberals and guarantees of civil liberties granted by the Charter of 1814. Charles gained influence within the French court after the assassination of his son Charles Ferdinand, Duke of Berry, in 1820 and eventually succeeded his brother in 1824. 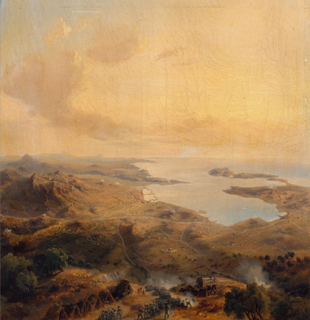 The Siege of Toulon was a military operation by Republican forces against a Royalist rebellion in the southern French city of Toulon during the Federalist revolts.

Port-Vendres is a commune in the Pyrénées-Orientales department in southern France. 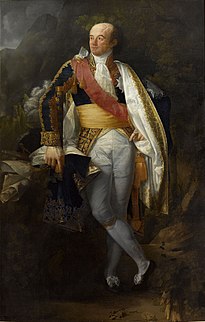 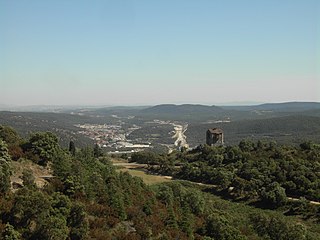 Bonabes Louis Victurnien, Marquess of Rougé, Peer of France, was a French military officer and statesman.

The Army of Condé was a French field army during the French Revolutionary Wars. One of several émigré field armies, it was the only one to survive the War of the First Coalition; others had been formed by the Comte d'Artois and Mirabeau-Tonneau. The émigré armies were formed by aristocrats and nobles who had fled from the violence in France after the August Decrees. The army was commanded by Louis Joseph de Bourbon, Prince de Condé, the cousin of Louis XVI of France. Among its members were Condé's grandson, the Duc d'Enghien and the two sons of Louis XVI's younger brother, the Comte d'Artois, and so the army was sometimes also called the Princes' Army. 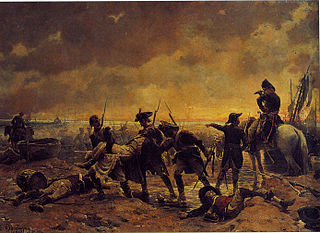 The invasion of France in 1795 or the Battle of Quiberon was a major landing on the Quiberon peninsula by émigré, counter-revolutionary troops in support of the Chouannerie and Vendée Revolt, beginning on 23 June and finally definitively repulsed on 21 July. It aimed to raise the whole of western France in revolt, bring an end to the French Revolution and restore the French monarchy. The invasion failed; it had a major negative impact, dealing a disastrous blow to the royalist cause.

Louis-Victor-Léon de Rochechouart was a French general of the House of Rochechouart fighting in the Royalist, Imperial Russian and Bourbon armies of the Napoleonic Wars. 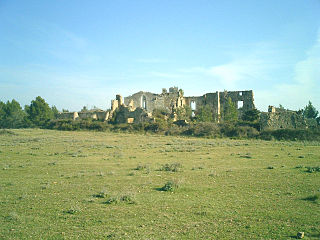 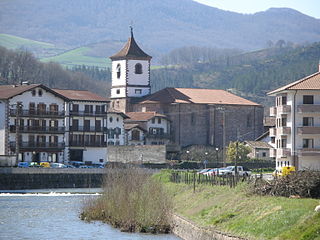 The Battle of the Baztan Valley was fought between 23 July and 1 August 1794 during the French Revolutionary War, between a French force from the Army of the Western Pyrenees commanded by Bon-Adrien Jeannot de Moncey and the Spanish forces led by Don Ventura Caro. The French army drove the Spanish from their defenses, then followed the valley northward to the Atlantic coast. The Spanish forces holding the coastal defenses were compelled to surrender or flee.

Armand Jean d'Allonville was a French nobleman from an old family in Beauce. He was nicknamed le balafré and served as maréchal des Camps et des armées du Roi, commander of the exiled Les Gentilshommes de la province de Champagne, then those of Brittany and the régiment d'Allonville.

Juan de Courten (elder) or Juan Antonio Curten Massenet or Juan Courten or Juan Curten began his Spanish military career in the War of the Austrian Succession at the age of 14. His father was a brigadier general of engineers who died in 1745. Courten fought in the Spanish–Portuguese War (1761–1763), the Invasion of Algiers in 1775, and the Great Siege of Gibraltar. He was the last Spanish governor of Oran in 1792. As a lieutenant general, he led an infantry division during the War of the Pyrenees against the First French Republic in several actions including Perpignan, Peyrestortes, Truillas, Boulou, and the Black Mountain. He was appointed Captain General of Aragon in 1795. 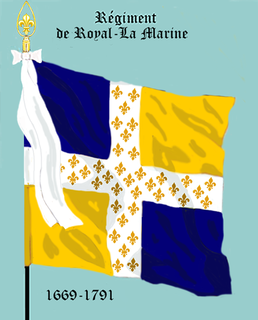 The Régiment Royal–La Marine was an infantry regiment of the Kingdom of France, established in 1669. The regiment was directly involved in the Day of the Tiles, which took place in Grenoble on June 7, 1788. The last unit of the regiment was incorporated into the 23 demi-brigade on March 21, 1797 and the regiment ceased to exist. 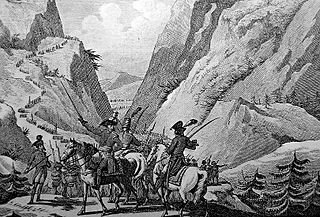 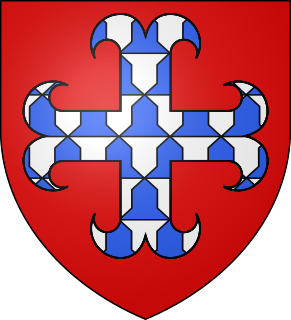 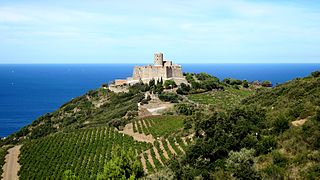 The Siege of Collioure saw a Republican French army led by Jacques François Dugommier invest a French port held by a Spanish garrison commanded by Eugenio Navarro. The actual siege work was carried out by Pierre François Sauret's reinforced division. After the three-and-a-half-week War of the Pyrenees siege the Spanish fleet sent to evacuate the garrison was blown off station by a storm. Navarro surrendered the town on the promise to exchange the paroled garrison with an equal number of French prisoners. After the defenders were released, the Spanish army commander Luis Firmín de Carvajal, Conde de la Unión refused to authorize the agreement or return any French captives. The infuriated French government afterward passed a decree ordering death to all Spanish prisoners and some units carried out the brutal order. 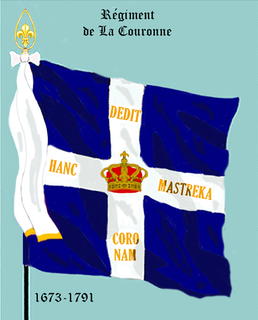 The Régiment de La Couronne was an infantry regiment of the Kingdom of France, created in 1643. 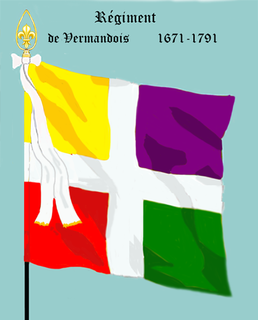 The Régiment de Vermandois was an infantry regiment of the Kingdom of France created in 1643.