Armand Trousseau (14 October 1801 – 23 June 1867) was a French internist. His contributions to medicine include Trousseau sign of malignancy, Trousseau sign of latent tetany, Trousseau–Lallemand bodies (an archaic synonym for Bence Jones proteins [1] ). He is sometimes credited with the quip "use new drugs quickly, while they still work", [2] though Michel-Philippe Bouvart had said the same over 40 years earlier. [3] [4]

A native of Tours, Indre-et-Loire, Armand Trousseau [5] began his medical studies in his native town as a pupil of Pierre Fidele Bretonneau at the local general hospital. He later continued his studies in Paris, where he received his doctorate in 1825 and became adjunct faculty in 1827. In 1828, the French government assigned him to investigate epidemics ravaging some parts of southern France. After completing his mission the same year, Trousseau travelled to Gibraltar as a member of a commission to investigate yellow fever. This work, and a monograph on laryngeal phthisis, led to his early recognition in Paris.

In 1830 Trousseau became Médecin des hôpitaux through concours, and in 1832 received a position in public health with the central bureau while working as a physician in the Hôtel-Dieu under Joseph Claude Anthelme Récamier. In 1837 he received the great prize of the academy. In 1839 he was appointed physician at the Hôpital St. Antoine and eventually became Chair of therapy and pharmacology at the Paris medical faculty. In 1850 he assumed the Chair of clinical medicine and again commenced working in the Hôtel-Dieu. He was also active in politics, particularly after the French Revolution of 1848, holding several positions including being a member of the legislative body. During his later years Trousseau developed gastric cancer. [6] Coincidentally, he previously described Trousseau sign of malignancy and developed a similar finding in himself. This cancer limited his activities and eventually proved fatal.

Trousseau was instrumental in creating new modes of treatment of croup, emphysema, pleurisy, goiter, and malaria. He received the prize of the French Academy of Medicine for his classic essay on laryngology which originally appeared in 1837. He was the first in France to perform a tracheotomy, and he wrote a monograph on this as well as intubation in 1851. His textbooks on clinical medicine and therapeutics were both extremely popular and translated into English. Trousseau coined the terms aphasia and forme fruste and popularized eponyms in disease description such as Addison's disease and Hodgkin's lymphoma.

In 1833, Trousseau invented the Trousseau Tracheal Dilator, a blunt-nosed forceps designed to allow easier access to a tracheostomy stoma. [7]

Trousseau was considered an outstanding teacher. Numerous students of his achieved fame in their own right, including Puerto Rican pro-independence leader, surgeon and Légion d'honneur laureate, Ramón Emeterio Betances. [8] Trousseau’s son Georges Phillipe Trousseau (1833–1894) became the royal doctor of the Kingdom of Hawaii, and Armand's grandson was the distinguished ophthalmologist Armand Henri Trousseau (1856–1910). [9] 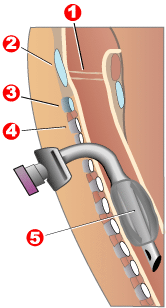 Tracheotomy, or tracheostomy, is a surgical procedure which consists of making an incision (cut) on the anterior aspect (front) of the neck and opening a direct airway through an incision in the trachea (windpipe). The resulting stoma (hole) can serve independently as an airway or as a site for a tracheal tube or tracheostomy tube to be inserted; this tube allows a person to breathe without the use of the nose or mouth.

Trousseau may refer to:

Jacques Genest was a Canadian physician and scientist. He founded the Institut de recherches cliniques de Montréal (IRCM) and was an emeritus professor at Université de Montréal and a professor at McGill University. Genest was best known for founding and leading several organizations related to clinical research in Québec and for his work on arterial hypertension. 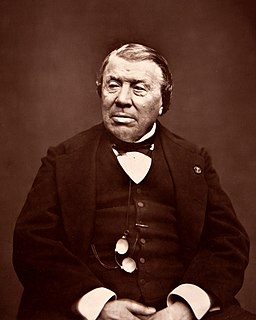 Philippe Ricord was a French physician.

The Hôtel-Dieu is a hospital located on the Île de la Cité in the 4th arrondissement of Paris, on the parvis of Notre-Dame. It was supposedly founded by Saint Landry in 651 AD, making it the oldest hospital in the city and the oldest worldwide still operating. The Hôtel-Dieu was the only hospital in the city until the Renaissance. While the old Hôtel-Dieu stood by the Seine on the opposite side of the parvise, it was ravaged by fire several times, and was rebuilt for the last time at its present location between 1867 and 1878, as part of Haussmann's renovation of Paris. 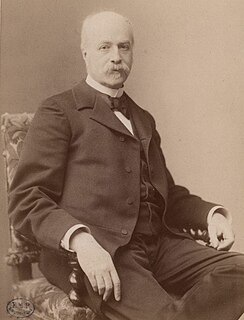 Augustin Nicolas Gilbert was a French physician. He was born in the town of Buzancy, Ardennes, and died in Paris. 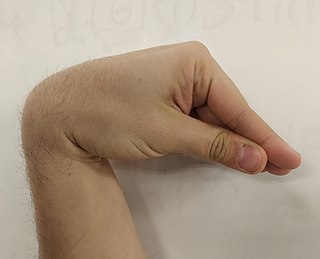 The Trousseau sign of malignancy or Trousseau's syndrome is a medical sign involving episodes of vessel inflammation due to blood clot (thrombophlebitis) which are recurrent or appearing in different locations over time. The location of the clot is tender and the clot can be felt as a nodule under the skin. Trousseau's syndrome is a rare variant of venous thrombosis that is characterized by recurrent, migratory thrombosis in superficial veins and in uncommon sites, such as the chest wall and arms. This syndrome is particularly associated with pancreatic, gastric and lung cancer and Trousseau's syndrome can be an early sign of cancer sometimes appearing months to years before the tumor would be otherwise detected. Heparin therapy is recommended to prevent future clots. The Trousseau sign of malignancy should not be confused with the Trousseau sign of latent tetany caused by low levels of calcium in the blood. 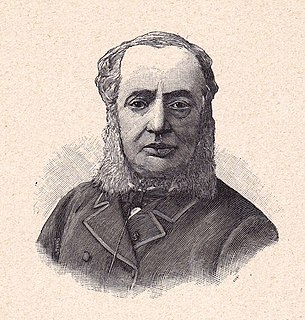 Eugène Bouchut was a French physician born in Paris. He made significant contributions in several medical fields, including pediatrics, laryngology, neurology and ophthalmology. 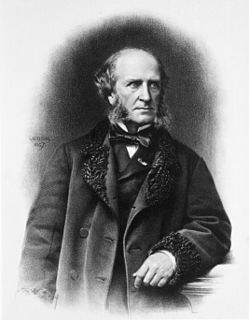 Noël-Francois-Odon Guéneau de Mussy was a French physician who was a native of Paris. He was the son of writer Philibert Guéneau de Mussy (1776-1854), and grandson to hygienist Jean Noël Hallé (1754-1822). 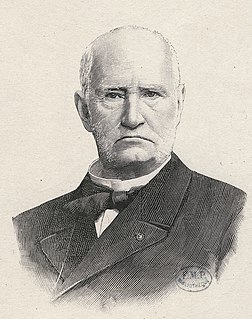 Germain Sée was a French clinician who was a native of Ribeauvillé, Haut-Rhin.

Adolphe-Marie Gubler was a French physician and pharmacologist born in Metz. 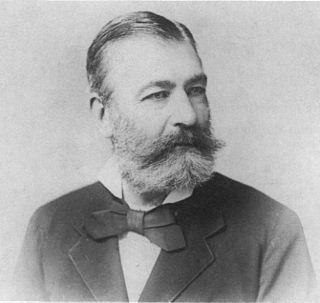 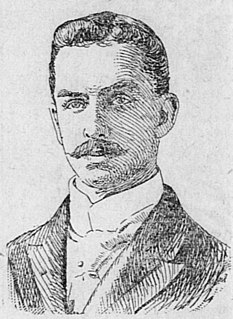 William Frederick L. Stanley (1872–1939) was an Irish lawyer who served as judge of the Republic of Hawaii.

Tracheal intubation, an invasive medical procedure, is the placement of a flexible plastic catheter into the trachea. For millennia, tracheotomy was considered the most reliable method of tracheal intubation. By the late 19th century, advances in the sciences of anatomy and physiology, as well as the beginnings of an appreciation of the germ theory of disease, had reduced the morbidity and mortality of this operation to a more acceptable rate. Also in the late 19th century, advances in endoscopic instrumentation had improved to such a degree that direct laryngoscopy had finally become a viable means to secure the airway by the non-surgical orotracheal route. Nasotracheal intubation was not widely practiced until the early 20th century. The 20th century saw the transformation of the practices of tracheotomy, endoscopy and non-surgical tracheal intubation from rarely employed procedures to essential components of the practices of anesthesia, critical care medicine, emergency medicine, gastroenterology, pulmonology and surgery. 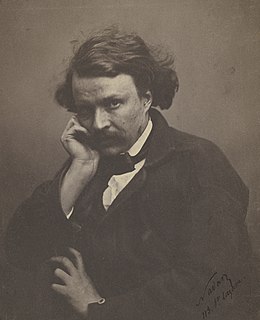 Hermaphrodite is a series of photographs of a young intersex person, who had a male build and stature, and may have been assigned female or self-identified as female, taken by French photographer Nadar. Possibly commissioned by Armand Trousseau, the nine photographs have been described as "probably the first medical photo-illustrations of a patient with intersex genitalia". They were originally restricted for scientific uses, and Nadar did not publish them. Further photographs of intersex subjects followed over the next several decades, although there is no evidence that the photographers knew of Nadar's work. 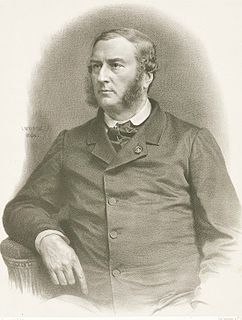 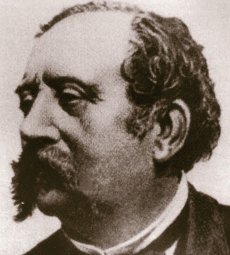 Ernest-Charles Lasègue was a French physician that released over one hundred scientific papers. He became recognized in the mid-19th century from his work in the fields of psychiatry and neurology. He published many of his works in a journal called Archives Générales de Médecine, in which he was an editor. A few of his major contributions consisted of his work with delusions of persecutions, a concept coined "folie à deux," and his description of hysterical anorexia. Aside from his publications, he worked various jobs before becoming the Chair of Clinical Medicine at Pitié-Salpêtrière Hospital. He remained positioned there until dying at the age of 66 due to complications from diabetes.