Last updated October 13, 2021
Icelandic writer
This is an Icelandic name. The last name is patronymic, not a family name; this person is referred to by the given name Arnaldur.

Arnaldur was born in Reykjavík on 28 January 1961, the son of writer Indriði G. Þorsteinsson. He graduated with a degree in history from the University of Iceland (Háskóli Íslands) in 1996. He worked as a journalist for the newspaper Morgunblaðið from 1981 to 1982, and later as a freelance writer. From 1986 to 2001, he was a film critic for Morgunblaðið.

His first book, Sons of Earth (Synir duftsins) came out in 1997, the first in the series with Detective Erlendur. The first two novels in the series have not yet been translated into English. [4] As of 2013 [update] , the series included 14 novels. Arnaldur is considered one of the most popular writers in Iceland in recent years — topping bestseller lists time and again.[ citation needed ] In 2004, his books were 7 of the 10 most popular titles borrowed in Reykjavík City Library[ citation needed ]. In 2006, his Erlendur novel Mýrin was made into a film, known internationally as Jar City , by Icelandic director Baltasar Kormákur. [5]

Arnaldur received the Glass Key award, a literature prize for the best Nordic crime novel, in 2002 and 2003. He won the Crime Writers' Association Gold Dagger Award in 2005 for his novel Silence of the Grave . He won the world's most lucrative crime fiction award, the RBA Prize for Crime Writing worth €125,000, in 2013 for Shadow Alley (Skuggasund). [6] [note 1]

Reykjavík is the capital and largest city of Iceland. It is located in southwestern Iceland, on the southern shore of Faxaflói bay. Its latitude is 64°08' N, making it the world's northernmost capital of a sovereign state. With a population of around 131,136, it is the centre of Iceland's cultural, economic and governmental activity, and is a popular tourist destination.

Voices is a 2006 translation of a 2003 crime novel by Icelandic author Arnaldur Indriðason, in his Detective Erlendur series. It was first published in English in August 2006. The Swedish translation of the novel (Änglarösten) won Sweden's Martin Beck Award for the best crime novel in translation.

Sigurjón Birgir Sigurðsson, known as Sjón, is an Icelandic poet, novelist, and lyricist. Sjón frequently collaborates with the singer Björk and has performed with The Sugarcubes as Johnny Triumph. His works have been translated into 30 languages. 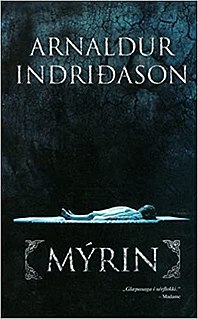 Jar City, also known as Tainted Blood, is a crime novel by Icelandic author Arnaldur Indriðason, first published in Iceland in 2000. It was the first in the Detective Erlendur series to be translated into English. In the UK, the title was changed to Tainted Blood when the paperback edition was released.

Silence of the Grave is a crime novel by Icelandic writer Arnaldur Indriðason. Set in Reykjavík, the novel forms part of the author's regionally popular Murder Mystery Series, which star Detective Erlendur. Originally published in Icelandic in 2001, the English translation by Bernard Scudder, in 2005, won the British Crime Writers' Association Gold Dagger award for best crime novel of the year.

Leyndardómar Reykjavíkur 2000 is a crime novel which was written by multiple Icelandic authors, each author writing one chapter. The novel received negative reviews.

Baltasar Kormákur Baltasarsson is an Icelandic actor, theater and film director, and film producer. He is best known for directing the films 101 Reykjavík, The Sea, A Little Trip to Heaven, a film based on the book Jar City by Arnaldur Indriðason, Contraband, 2 Guns and Everest.

Iceland has a notable cinema film industry, with many Icelandic actors having gone on to receive international attention. The most famous film, and the only one to be nominated for the Academy Award and European Film Awards, is Börn náttúrunnar, directed by Friðrik Þór Friðriksson. This film brought Icelandic cinema to the international scene, which has since grown to its height, with films such as Nói Albínói by Dagur Kári, heralded as descendants of the Icelandic film tradition. 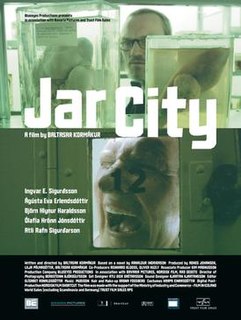 Jar City is a 2006 Icelandic film directed by Baltasar Kormákur. It is based on Mýrin, a 2000 novel written by Arnaldur Indriðason and released in English as Jar City.

Bernard John Scudder was a British translator from Icelandic into English. His translations include the work of best-selling crime writer Arnaldur Indriðason and Yrsa Sigurðardóttir. Scudder's translation of Arnaldur's novel Silence of the Grave won the 2005 Crime Writers' Association Gold Dagger.

Arctic Chill is a 2008 translation of a 2005 crime novel by Icelandic author Arnaldur Indriðason, in his Detective Erlendur series.

Katrín Jakobsdóttir is an Icelandic politician serving as the prime minister of Iceland since 2017. She has been a member of the Althing for the Reykjavík North constituency since 2007. She became deputy chairperson of the Left-Green Movement in 2003 and has been their chairperson since 2013. Katrín was Iceland's minister of education, science and culture and of Nordic co-operation from 2 February 2009 to 23 May 2013. She is Iceland's second female prime minister after Jóhanna Sigurðardóttir. On 19 February 2020, she was named Chair of the Council of Women World Leaders.

Óttar Martin Norðfjörð is an Icelandic writer, both of crime fiction and poetry. He has a master's degree in philosophy from the University of Iceland. His first novel, Barnagælur, was published in 2005. His crime novels have been translated into Dutch, German and Spanish. 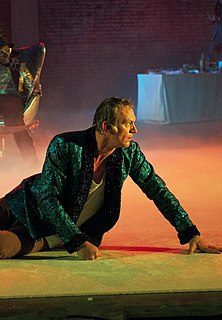 Ingvar Eggert Sigurðsson is an Icelandic actor who has worked extensively in Icelandic cinema. He has had roles in Friðrik Þór Friðriksson's Englar alheimsins and Baltasar Kormákur's Mýrin and Everest. In addition to his film work, Ingvar has also acted extensively in television and stage productions, both in Iceland and overseas.

RBA Prize for Crime Writing was a Spanish literary award said to be the world's most lucrative crime fiction prize at €125,000. It is funded by Barcelona-based multimedia publishing company RBA.

The Inspector Erlendur Series is a popular murder mystery series featuring Reykjavik detective Erlendur Sveinsson. Written by Icelandic author Arnaldur Indriðason, the series is published in the U.S. by Minotaur Press and consists of more than a dozen novels. Mýrin, the third book in the series, was the first to be translated into English. Mýrin was also adapted as a 2006 film entitled Jar City, starring Ingvar Eggert Sigurðsson as Erlendur.

Ævar Örn Jósepsson is an Icelandic journalist, translator, and author.