Last updated April 19, 2020
For disambiguation from other saints with the same name, see Saint Arnold.

Arnold (Arnoul) of Soissons or Arnold or Arnulf of Oudenburg [1] (ca 1040–1087) is a saint of the Roman Catholic Church, the patron saint of hop-pickers and Belgian brewers. [2]

Arnold, born in Brabant, the son of a certain Fulbertus [3] was first a career soldier before settling at the Benedictine St. Medard's Abbey, Soissons, France. He spent his first three years as a hermit, but later rose to be abbot of the monastery. His hagiography states that he tried to refuse this honor and flee, but was forced by a wolf [4] to return. He then became a priest and in 1080, bishop of Soissons, another honor that he sought to avoid. When his see was occupied by another bishop, rather than fighting, he took the opportunity to retire from public life, founding the Abbey of St. Peter in Oudenburg. [5]

As abbot in Oudenburg, Arnold brewed beer, as essential in medieval life as water. He encouraged local peasants to drink beer, instead of water, due to its "gift of health". During the process of brewing, the water was boiled and thus, unknown to all, freed of pathogens, making the beer safer to drink. The beer normally consumed at breakfast and during the day at this time in Europe was called small beer, having a very low alcohol content, and containing spent yeast. It is likely that people in the local area normally consumed small beer from the monastery, or made their own small beer at the instructions of Arnold and his fellow monks. During one outbreak of sickness, Arnold advised the local people to avoid consuming water, in favor of beer, which advice effectively saved lives. [6]

One miracle tale says, at the time of an epidemic, rather than stand by while the local people fell ill from drinking water, Arnold had them consume his monastery brews. Because of this, many people in his church survived the plague. [7] This same story is also told of Arnulf or Arnold of Metz, another patron of brewers. There are many depictions of St. Arnold with a mashing rake in his hand, to identify him. He is honoured in July with a parade in Brussels on the "Day of Beer." [8]

Miracles that were reported at his tomb were investigated and approved by a council at Beauvais in 1121; Arnold's relics were translated to the church of Saint Peter, Aldenburg in 1131. [9] St. Arnold's feast day is 14 August. [10]

Arnulf is a masculine German given name. It is composed of the Germanic elements arn "eagle" and ulf "wolf". The -ulf, -olf suffix was an extremely frequent element in Germanic onomastics and from an early time was perceived as a mere suffix forming given names. Similarly, the suffix -wald, -ald, -old, originally from wald "rule, power" underwent semantic weakening. Therefore, the name Arnulf and Arnold were often conflated in early medieval records, as is the case with bishop Arnulf of Metz, especially as the final consonant came to be dropped (Arnoul). 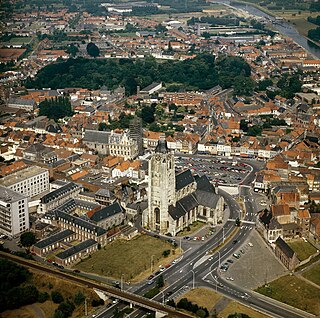 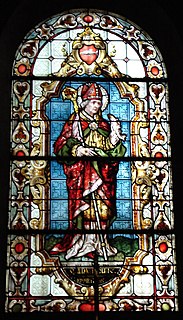 Arnulf of Metz was a Frankish bishop of Metz and advisor to the Merovingian court of Austrasia, who retired to the Abbey of Remiremont. In French he is also known as Arnoul or Arnoulf. In English he is known as Arnold. 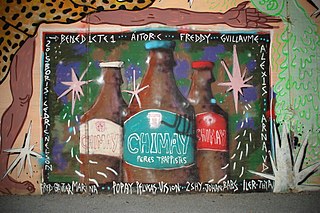 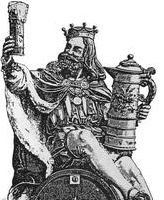 Gambrinus is a legendary European culture hero celebrated as an icon of beer, brewing, joviality, and joie de vivre. Traditional songs, poems, and stories describe him as a king, duke, or count of Flanders and Brabant. Typical representations in the visual arts depict him as a rotund, bearded duke or king, holding a tankard or mug, and sometimes with a keg nearby.

Westvleteren is a brewery founded in 1838 at the Trappist Abbey of Saint Sixtus in Vleteren, Belgium. 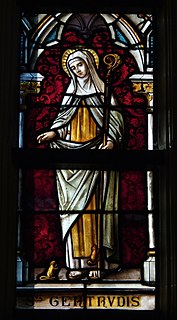 Gertrude of Nivelles, O.S.B. was a seventh-century abbess who, with her mother Itta, founded the Abbey of Nivelles located in present-day Belgium. 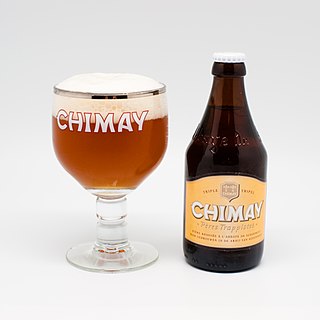 Beer in Belgium varies from pale lager to amber ales, lambic beers, Flemish red ales, sour brown ales, strong ales and stouts. In 2016, there were approximately 224 active breweries in Belgium, including international companies, such as AB InBev, and traditional breweries including Trappist monasteries. On average, Belgians drink 84 liters of beer each year, down from around 200 each year in 1900. Most beers are bought or served in bottles, rather than cans, and almost every beer has its own branded, sometimes uniquely shaped, glass. In 2016, UNESCO inscribed Belgian beer culture on their list of the intangible cultural heritage of humanity.

Drogo, also known as Dreux or Drogon, was an illegitimate son of Frankish emperor Charlemagne by the concubine Regina.

Beer is one of the oldest drinks humans have produced. The first chemically confirmed barley beer dates back to at least the 5th millennium BC in Iran, and was recorded in the written history of ancient Egypt and Mesopotamia and spread throughout the world. Though, the ancient Chinese artifacts suggested that beer brewed with grapes, honey, hawthorns, and rice were produced as far back as 7,000 BC.

The Saint Arnold Brewing Company is a brewery in Houston, Texas, USA, named after a patron saint of brewing, Saint Arnulf of Metz. It was founded in 1994 by Brock Wagner and Kevin Bartol, graduates of Rice University. The brewery offers tours every weekday & Saturday afternoons, which have attracted a large following. Saint Arnold has won numerous national and international awards including Mid Size Brewery of The Year 2017.

Itta of Metz, O.S.B. was the wife of Pepin of Landen, Mayor of the Palace of the Kingdom of Austrasia. After his death, she founded the Abbey of Nivelles, where she became a Colombanian nun along with her daughter, Gertrude of Nivelles. Both are honored as saints by the Catholic Church.

Saint Gummarus of Lier was a Belgian saint. He was the son of the Lord of Emblem. An official in the court of his relative Pepin the Younger or Pepin of Herstal according to some other sources, after a number of years in military service he retired to live the life of a hermit. The town of Lier grew up around his hermitage.

Dom Martinus Dom, O.C.R., was a Belgian Trappist monk. He served as the first abbot of the Trappist Abbey of Westmalle, where he founded the Westmalle Brewery. 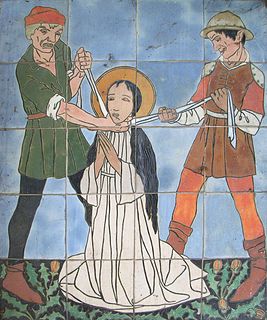 Saint Godelieve is a Flemish saint.

Fitger's Brewing Company was a beer manufacturer in Duluth, Minnesota, United States, from 1881 to 1972. The surviving brewery complex stretches for 720 feet (220 m) along the Lake Superior shoreline and East Superior Street, one of Duluth's main roads. The majority of the ten-building complex was constructed between 1886 and 1911. Fitger's, as it is now known, has undergone adaptive reuse as an indoor mall with shops, restaurants, nightclubs, a hotel, and a museum on the brewery's history.

A mash rake or mashing rake is a tool used in the mashing process of brewing and distilling. The mash rake churns the mash to ensure it is mixed properly and is wet everywhere, so no sugars are wasted.

The Abbey of St. Peter in Oudenburg was an abbey established in 1070 by Arnold of Soissons.

The Abbey Brewing Company is an American craft brewing company located in the Chama River Wilderness Area near Abiquiú, New Mexico. The microbrewery was founded in 2003 as a Benedictine joint venture of Our Lady of Guadalupe monastery in Pecos, New Mexico and the Monastery of Christ in the Desert in Abiquiú. It is the first American monastery brewery founded since before the Prohibition Era. The brewery's motto is "Made with care and prayer". 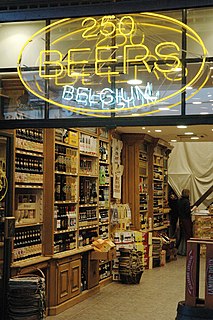 Belgian beer culture includes traditions of craftsmanship for brewing beer and is part of the diet and social life of Belgians. Its cultural value was formally recognized in 2016 when it was added to UNESCO's "Intangible Cultural Heritage of Humanity" list.