Arrandale is the code name for a family of mobile Intel processors, sold as mobile Intel Core i3, i5 and i7 as well as Celeron and Pentium. [1] [2] It is closely related to the desktop Clarkdale processor; both use dual-core dies based on the Westmere 32 nm die shrink of the Nehalem microarchitecture, and have integrated Graphics as well as PCI Express and DMI links.

Arrandale is the successor of the 45 nm Core-microarchitecture-based Penryn processor that is used in many of the mobile Intel Core 2, Celeron and Pentium Dual-Core processors. While Penryn typically used both a north bridge and a south bridge, Arrandale already contains the major northbridge components, which are the memory controller, PCI Express bus for external graphics, integrated graphics, and the DMI interface, making it possible to build more compact systems.

Arrandale processors were sold under the Celeron, Pentium, Intel Core i3, Intel Core i5 and Intel Core i7 brand names, with only the Core i7 models using the full L3 cache and all features. Processors ending in E instead of M are embedded versions with support for PCIe bifurcation and ECC memory, while the regular mobile versions only support a single PCIe port and non-ECC memory. The Celeron versions of Arrandale have the smallest L3 cache of just 2 MB. [5]

Pentium is a brand used for a series of x86 architecture-compatible microprocessors produced by Intel since 1993. In their form as of November 2011, Pentium processors are considered entry-level products that Intel rates as "two stars", meaning that they are above the low-end Atom and Celeron series, but below the faster Core i3, i5, i7, i9, and high-end Xeon series.

Error-correcting code memory is a type of computer data storage that can detect and correct the most common kinds of internal data corruption. ECC memory is used in most computers where data corruption cannot be tolerated under any circumstances, such as for scientific or financial computing.

Consumer Ultra-Low Voltage (CULV) is a computing platform developed by Intel. It has been estimated that this market could reach 10 million CULV laptops shipped within 2009. Competing platforms are the VIA Nano, AMD Yukon, AMD Nile notebook platform, and graphic chips from the Nvidia GeForce line within the "Nvidia Ion platform". Some of the lowest power using processors for the ultra thin CULV category may be only a few watts more than the Intel Atom, which is rated at no more than 2.5 W. Because of their low power and heat output, CULV enables very thin computer systems, and long battery life in notebook computers. 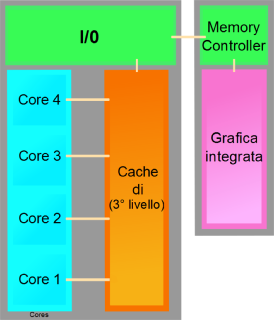 Westmere is the code name given to the 32 nm die shrink of Nehalem. While sharing the same CPU sockets, Westmere included Intel HD, UHD and Iris Graphics, Nehalem did not.

Goldmont Plus is a microarchitecture for low-power Atom, Celeron and Pentium Silver branded processors used in systems on a chip (SoCs) made by Intel. The Gemini Lake platform with 14 nm Goldmont Plus core was officially launched on December 11, 2017.