Arsenopyrite is an iron arsenic sulfide (FeAsS). It is a hard (Mohs 5.5-6) metallic, opaque, steel grey to silver white mineral with a relatively high specific gravity of 6.1. [1] When dissolved in nitric acid, it releases elemental sulfur. When arsenopyrite is heated, it produces sulfur and arsenic vapor. With 46% arsenic content, arsenopyrite, along with orpiment, is a principal ore of arsenic. When deposits of arsenopyrite become exposed to the atmosphere, the mineral slowly converts into iron arsenates. Arsenopyrite is generally an acid-consuming sulfide mineral, unlike iron pyrite which can lead to acid mine drainage.[ citation needed ]

The crystal habit, hardness, density, and garlic odor when struck are diagnostic. Arsenopyrite in older literature may be referred to as mispickel, a name of German origin. [4]

Arsenopyrite also can be associated with significant amounts of gold. Consequently, it serves as an indicator of gold bearing reefs. Many arsenopyrite gold ores are refractory, i.e. the gold is not easily cyanide leached from the mineral matrix.

Arsenopyrite is found in high temperature hydrothermal veins, in pegmatites, and in areas of contact metamorphism or metasomatism.

Arsenopyrite crystallizes in the monoclinic crystal system and often shows prismatic crystal or columnar forms with striations and twinning common. Arsenopyrite may be referred to in older references as orthorhombic, but it has been shown to be monoclinic. In terms of its atomic structure, each Fe center is linked to three As atoms and three S atoms. The material can be described as Fe3+ with the diatomic trianion AsS3−. The connectivity of the atoms is more similar to that in marcasite than pyrite. The ion description is imperfect because the material is semiconducting and the Fe-As and Fe-S bonds are highly covalent. [5] 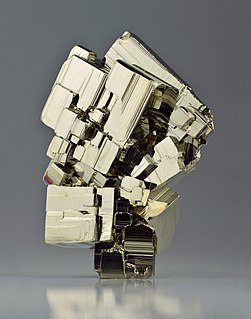 The mineral pyrite, or iron pyrite, also known as fool's gold, is an iron sulfide with the chemical formula FeS2 (iron (II) disulfide). Pyrite is the most abundant sulfide mineral. 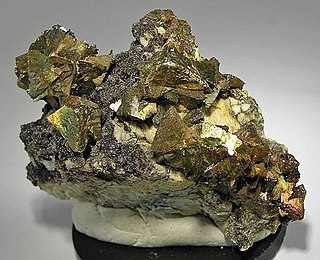 Chalcopyrite ( KAL-kə-PY-ryte, -⁠koh-) is a copper iron sulfide mineral and the most abundant copper ore mineral. It has the chemical formula CuFeS2 and crystallizes in the tetragonal system. It has a brassy to golden yellow color and a hardness of 3.5 to 4 on the Mohs scale. Its streak is diagnostic as green tinged black. 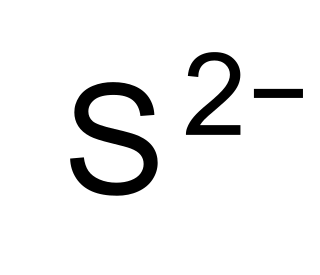 Sulfide (British English also sulphide) is an inorganic anion of sulfur with the chemical formula S2− or a compound containing one or more S2− ions. Solutions of sulfide salts are corrosive. Sulfide also refers to chemical compounds large families of inorganic and organic compounds, e.g. lead sulfide and dimethyl sulfide. Hydrogen sulfide (H2S) and bisulfide (SH−) are the conjugate acids of sulfide.

Nickeline or niccolite is a mineral consisting of nickel arsenide (NiAs) containing 43.9% nickel and 56.1% arsenic.

Tennantite is a copper arsenic sulfosalt mineral with an ideal formula Cu12As4S13. Due to variable substitution of the copper by iron and zinc the formula is Cu6[Cu4(Fe,Zn)2]As4S13. It is gray-black, steel-gray, iron-gray or black in color. A closely related mineral, tetrahedrite (Cu12Sb4S13) has antimony substituting for arsenic and the two form a solid solution series. The two have very similar properties and is often difficult to distinguish between tennantite and tetrahedrite. Iron, zinc, and silver substitute up to about 15% for the copper site.

Named after Skuterudåsen, a hill in Modum, Norway, skutterudite is a cobalt arsenide mineral containing variable amounts of nickel and iron substituting for cobalt with the ideal formula CoAs3. Some references give the arsenic a variable formula subscript of 2-3. High nickel varieties are referred to as nickel-skutterudite, previously chloanthite. It is a hydrothermal ore mineral found in moderate to high temperature veins with other Ni-Co minerals. Associated minerals are arsenopyrite, native silver, erythrite, annabergite, nickeline, cobaltite, silver sulfosalts, native bismuth, calcite, siderite, barite and quartz. It is mined as an ore of cobalt and nickel with a by-product of arsenic. 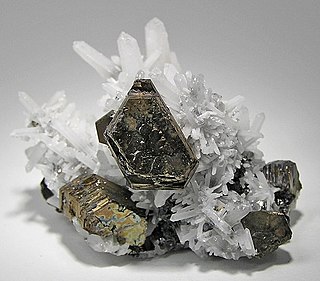 Pyrrhotite is an iron sulfide mineral with the formula Fe(1-x)S. It is a nonstoichiometric variant of FeS, the mineral known as troilite. Pyrrhotite is also called magnetic pyrite, because the color is similar to pyrite and it is weakly magnetic. The magnetism decreases as the iron content increases, and troilite is non-magnetic. 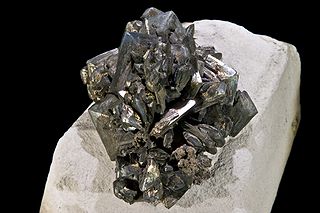 The mineral marcasite, sometimes called “white iron pyrite”, is iron sulfide (FeS2) with orthorhombic crystal structure. It is physically and crystallographically distinct from pyrite, which is iron sulfide with cubic crystal structure. Both structures do have in common that they contain the disulfide S22− ion having a short bonding distance between the sulfur atoms. The structures differ in how these di-anions are arranged around the Fe2+ cations. Marcasite is lighter and more brittle than pyrite. Specimens of marcasite often crumble and break up due to the unstable crystal structure.

Cobaltite is a sulfide mineral composed of cobalt, arsenic, and sulfur, CoAsS. Its impurities may contain up to 10% iron and variable amounts of nickel. Structurally, it resembles pyrite (FeS2) with one of the sulfur atoms replaced by an arsenic atom. 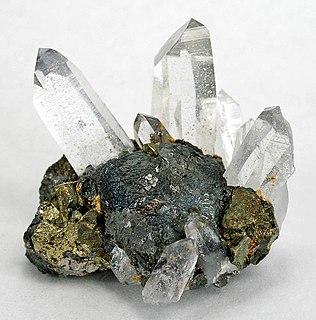 Stannite is a mineral, a sulfide of copper, iron, and tin, in the category of thiostannates.

Djurleite is a copper sulfide mineral of secondary origin with formula Cu31S16 that crystallizes with monoclinic-prismatic symmetry. It is typically massive in form, but does at times develop thin tabular to prismatic crystals. It occurs with other supergene minerals such as chalcocite, covellite and digenite in the enriched zone of copper orebodies. It is a member of the chalcocite group, and very similar to chalcocite, Cu2S, in its composition and properties, but the two minerals can be distinguished from each other by x-ray powder diffraction. Intergrowths and transformations between djurleite, digenite and chalcocite are common. Many of the reported associations of digenite and djurleite, however, identified by powder diffraction, could be anilite and djurleite, as anilite transforms to digenite during grinding.

Pararealgar is an arsenic sulfide mineral with the chemical formula As4S4 also represented as AsS. It forms gradually from realgar under exposure to light. Its name derives from the fact that its elemental composition is identical to realgar, As4S4. It is soft with a Mohs hardness of 1 - 1.5, is yellow orange in colour, and its monoclinic prismatic crystals are very brittle, easily crumbling to powder. 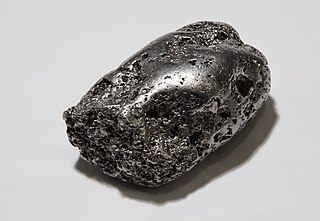 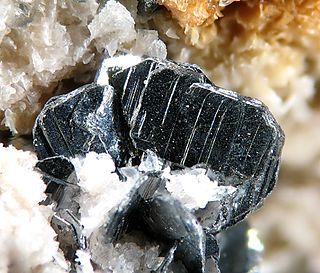 Biomining is the technique of extracting metals from ores and other solid materials typically using prokaryotes, fungi or plants. These organisms secrete different organic compounds that chelate metals from the environment and bring it back to the cell where they are typically used to coordinate electrons. It was discovered in the mid 1900s that microorganisms use metals in the cell. Some microbes can use stable metals such as iron, copper, zinc, and gold as well as unstable atoms such as uranium and thorium. Companies can now grow large chemostats of microbes that are leaching metals from their media, these vats of culture can then be transformed into many marketable metal compounds. Biomining is an environmentally friendly technique compared to typical mining. Mining releases many pollutants while the only chemicals released from biomining is any metabolites or gasses that the bacteria secrete. The same concept can be used for bioremediation models. Bacteria can be inoculated into environments contaminated with metals, oils, or other toxic compounds. The bacteria can clean the environment by absorbing these toxic compounds to create energy in the cell. Microbes can achieve things at a chemical level that could never be done by humans. Bacteria can mine for metals, clean oil spills, purify gold, and use radioactive elements for energy. 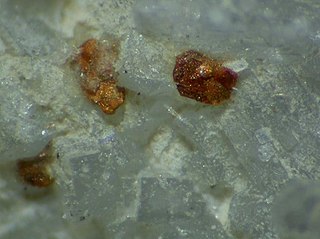 Mackinawite is an iron nickel sulfide mineral with the chemical formula (Fe,Ni)
1+xS. The mineral crystallizes in the tetragonal crystal system and has been described as a distorted, close packed, cubic array of S atoms with some of the gaps filled with Fe. Mackinawite occurs as opaque bronze to grey-white tabular crystals and anhedral masses. It has a Mohs hardness of 2.5 and a specific gravity of 4.17. It was first described in 1962 for an occurrence in the Mackinaw mine, Snohomish County, Washington for which it was named. 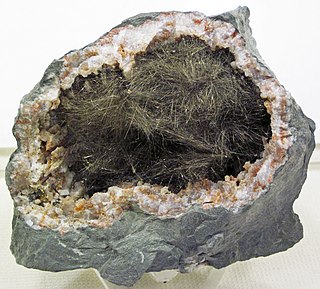 Millerite is a nickel sulfide mineral, NiS. It is brassy in colour and has an acicular habit, often forming radiating masses and furry aggregates. It can be distinguished from pentlandite by crystal habit, its duller colour, and general lack of association with pyrite or pyrrhotite.

Pressure Oxidation is a process for extracting gold from refractory ore. 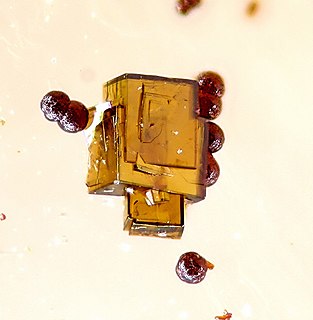