Art Landy (born Arthur Charles Landmesser, May 18, 1904 – May 21, 1977) was an American animator who specialized in animation set decoration, working on over 150 animated features. After beginning his career in Disney Studio in the second half of the 1940s, he joined the Walter Lantz Studio in 1953 and worked there until the end of 1966. [1] At Disney, he mostly worked on the series of Pluto films, and on the 1953 animated feature film Peter Pan . At Lantz, he worked on numerous Woody Woodpecker shorts.

Pluto, also called Pluto the Pup, is a cartoon dog created in 1930 at Walt Disney Productions. He is a yellow-orange color, medium-sized, short-haired dog with black ears. Unlike most Disney characters, Pluto is not anthropomorphic beyond some characteristics such as facial expression. He is Mickey Mouse's pet. Officially a mixed-breed dog, he made his debut as a bloodhound in the Mickey Mouse cartoon The Chain Gang. Together with Mickey Mouse, Minnie Mouse, Donald Duck, Daisy Duck, and Goofy, Pluto is one of the "Sensational Six"—the biggest stars in the Disney universe. Though all six are non-human animals, Pluto alone is not dressed as a human.

Landy was born in Newark, New Jersey, and died in Van Nuys, California. 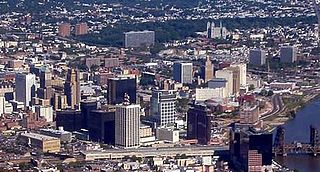 Newark is the most populous city in the U.S. state of New Jersey and the seat of Essex County. As one of the nation's major air, shipping, and rail hubs, the city had a population of 285,154 in 2017, making it the nation's 70th-most populous municipality, after being ranked 63rd in the nation in 2000.

Oswald the Lucky Rabbit is an anthropomorphic rabbit and animated cartoon character created by Walt Disney for cartoon animal films and distributed by Universal Studios in the 1920s and 1930s, serving as the Disney studio's first animated character to feature in their own series. A total of 27 animated Oswald one-reelers were produced at Walt Disney Animation Studios. In 1928, Charles Mintz took the rights of Oswald from Walt Disney and claimed Oswald as an official Universal Studios character. In November 1928, as a replacement to compete with Oswald the Lucky Rabbit, Walt Disney and Ub Iwerks created Mickey Mouse for the Walt Disney Studio.

The golden age of American animation was a period in the history of U.S. animation that began with the advent of sound cartoons in 1928 and continued until around 1972, by which time theatrical animated shorts had begun losing to the newer medium of television animation.

Walter Lantz Productions was an American animation studio. It was in operation from 1929 to 1972, and was the principal supplier of animation for Universal Studios, now part of the media conglomerate NBCUniversal, owned by Comcast. Nowadays the company exists in name only as a subsidiary of Universal Animation Studios, handling the rights to the studio's characters and films.

Richard James "Dick" Lundy was an American animator and film director who worked at several different animation studios including Walt Disney Animation Studios, MGM, and Hanna-Barbera. Lundy was a pioneer of personality animation and is today most remembered as one of the creators of Donald Duck. Throughout his career he worked as a primary animator on at least 60 films, both short and feature-length, and directed 51 short films. 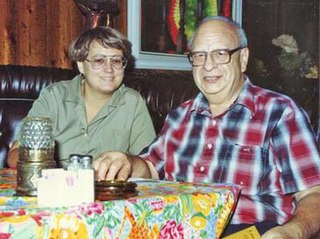 Clito Enrico "Clyde" Geronimi, known as Gerry, was an Italian American animation director. He is best known for his work at Walt Disney Productions.

Thomas Jacob "Tom" McKimson was an American animator, best known for his work at the Warner Bros. Cartoons studio. He was the older brother of animators Robert and Charles McKimson.

Arthur "Art" Stevens was an animator, director and producer for Walt Disney Productions.

Anthony "Tony" Pipolo, known professionally as Tom Palmer was an Italian-American animator and short film director who was active in the 1930s and worked at several animation studios. He was born with the surname of "Pipolo" but changed his name to Palmer. One of his brothers, Frank Pipolo, was a decorated New York City police officer.

Ken Southworth was an English animator, cartoonist and animation instructor who worked for a number of major animation studios throughout his nearly 60-year career, including Walt Disney Studios, Hanna-Barbera, Filmation, Warner Bros., MGM, Walter Lantz and Clokey Productions. His credits included Disney's Alice in Wonderland and Legend of Sleepy Hollow, as well as Hanna-Barbera's The Flintstones, Space Ghost and Dino Boy, Scooby-Doo, Where Are You! and The Smurfs among others.

Jack Dunham was an American animator and television producer who worked for Walt Disney Animation Studios and Walter Lantz Productions during his career.

Cecil Hays Surry was a cartoonist at various film studios in the Golden Age of Animation.

Volus Carson Jones was an American animator. He was best known for his work at the Disney cartoon studio, but amassed credits at numerous other studios including Warner Bros.-Seven Arts Animation, Harman-Ising Productions, Walter Lantz Productions, Format Films, Hanna-Barbera, Famous Studios and UPA.

Cal Howard was an American cartoon story artist, animator and director mostly remembered for his work at Walter Lantz and Warner Bros. He was also the voice actor of Gabby Goat in Get Rich Quick Porky.

Riley A. Thomson, Jr. was an American animator and comics artist who spent most of his career working with Walt Disney films and characters. He directed six Disney short films including The Nifty Nineties and Symphony Hour.