Arthur H. Robinson (January 5, 1915 – October 10, 2004) was an American geographer and cartographer, [1] who was professor in the Geography Department at the University of Wisconsin–Madison from 1947 until he retired in 1980. He was a prolific writer and influential philosopher on cartography, and one of his most notable accomplishments is the Robinson projection of 1961.

Arthur H. Robinson was born in Montreal, Quebec, Canada, to American parents, James Howard Robinson and Elizabeth (Peavey) Robinson. He lived in Great Britain while he was young, and received his post-secondary education in the United States. His undergraduate work was done at Miami University in Oxford, Ohio, obtaining a B.A. degree in 1936. During his undergraduate work he became especially interested in cartography, and received some practice drawing maps for faculty textbooks [2] while earning a master's degree in geography from the University of Wisconsin–Madison in 1938, and he earned his Ph.D. degree from Ohio State University in 1947. [3] While at Ohio State, Robinson worked to solve problems in the Map communication model.

During World War II, Robinson served as director of the map division of the Office of Strategic Services (OSS). In 1941, when Robinson joined OSS, there were no cartographers as we know them today. Robinson engaged geographers with some interest in mapping and the group developed their techniques on the job. [4] Robinson oversaw the creation of 5,000 hand-drawn maps and attended the Allied conferences at Quebec and Cairo in 1943 and in 1944, he served as chief U.S. map officer. For his efforts Robinson received the Legion of Merit from the United States Army in 1946. [5]

In 1947 Robinson subsequently joined the geography department at the University of Wisconsin–Madison, where he spent his career in academia and research. Robinson sought to establish cartography as a recognized discipline and ultimately the university granted both undergraduate and master's degrees in cartography. [4] The Wisconsin cartography program has conferred more than 100 masters and 20 doctoral degrees, and many of the doctoral recipients created respected cartography programs at other universities. [6] Today the map library at the University of Wisconsin–Madison is named in his honor. [7]

Robinson married Mary Elizabeth Coffin (1910–-1992), daughter of John R. Coffin and Bessie Morris Coffin, on December 23, 1938, in Franklin County, Ohio. They had two children, a son and a daughter. After the death of his first wife, Robinson remarried in 1993. His second wife was Martha Elizabeth Rodabaugh Phillips (1914–2010), a widow, with whom he had attended school in Oxford, Ohio.

Robinson was a prolific writer and influential philosopher on cartography: [5]

One of Robinson's most notable accomplishments is the Robinson projection. In 1961, Rand McNally asked Robinson to choose a projection for use as a world map that, among other criteria, was uninterrupted, [9] had limited distortion, and was pleasing to the eye of general viewers. [10] Robinson could not find a projection that satisfied the criteria, so Rand McNally commissioned him to design one.

Robinson proceeded through an iterative process to create a pseudo-cylindrical projection that intends to strike a compromise between distortions in areas and in distances, in order to attain a more natural visualization. The projection has been widely used since its introduction. In 1988, National Geographic adopted it for their world maps but replaced it in 1998 with the Winkel tripel projection.

Robinson produced over 60 articles for professional publications, as well as fifteen books and monographs. [5] Books:

Rand McNally is an American technology and publishing company that provides mapping, software and hardware for the consumer electronics, commercial transportation and education markets. The company is headquartered in Chicago, with a distribution center in Richmond, Kentucky.

An effectively designed map is one in which the intended message is clearly communicated to the map user. By employing the concept of figure–ground, a viewer can easily distinguish between the main figure on a map and the background information. Several concepts that are key to developing good figure–ground in any cartographic design are differentiation, closed form, centrality, articulation and good contour. In addition, by considering the intended intellectual hierarchy, or the order of importance of each map element, the author can develop a visual hierarchy on the map that corresponds appropriately. 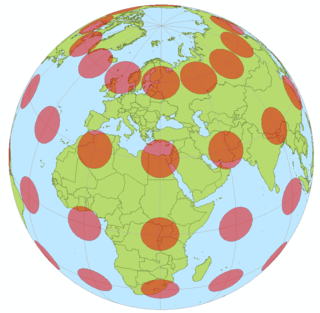 Map Communication Model is a theory in cartography that characterizes mapping as a process of transmitting geographic information via the map from the cartographer to the end-user.

The history of cartography traces the development of cartography, or mapmaking technology, in human history. Maps have been one of the most important human inventions for millennia. People have created and used maps to help them define, explain, and navigate their way through the world. Earliest archaeological maps include cave paintings to ancient maps of Babylon, Greece, China, and India. They began as two-dimensional drawings, and for some time at least in Europe, the Earth was thought to be flat. Nowadays maps can be visualized adopted as three-dimensional shapes on globes. Modern maps of the old and new worlds developed through the Age of Discovery. In the 21st century, with the advent of the computing age and information age, maps can now be digitized in numerical form, transmitted and updated easily via satellite GPS and apps like Google Maps, and used universally more easily than ever before.

The following outline is provided as an overview of and topical guide to cartography:

Mark Stephen Monmonier is a Distinguished Professor of Geography at the Maxwell School of Syracuse University. He specializes in toponymy, geography, and geographic information systems. His popular written works show a combination of serious study and a sense of humor. Most of his work is published by University of Chicago Press. He has appeared on National Public Radio interview programs.

David Woodward was an English-born American historian of cartography and cartographer.

Erwin Raisz was a Hungarian-born American cartographer, best known for his physiographic maps of landforms.

(John) Brian Harley was a geographer, cartographer, and map historian at the universities of Birmingham, Liverpool, Exeter and Wisconsin–Milwaukee. He helped found the History of Cartography Project and was the founding co-editor of the resulting The History of Cartography. In recent years, Harley's work has gained broad prominence among geographers and social theorists, and it has contributed greatly to the emerging discipline of critical cartography.

Borden D. Dent (1938–2000) was an American geographer and cartographer who served as professor emeritus and chairman of the Department of Geography and Anthropology at Georgia State University. His textbook, Cartography: Thematic Map Design, is one of the seminal texts in the field, and its sixth edition was reissued in 2009.

Cartographic propaganda is a map created with the goal of achieving a result similar to traditional propaganda. The map can be outright falsified, or created using subjectivity with the goal of persuasion. The idea that maps are subjective is not new; cartographers refer to maps as a human-subjective product and some view cartography as an "industry, which packages and markets spatial knowledge" or as a communicative device distorted by human subjectivity. However, cartographic propaganda is widely successful because maps are often presented as a miniature model of reality, and it is a rare occurrence that a map is referred to as a distorted model, which sometimes can "lie" and contain items that are completely different from reality. Because the word propaganda has become a pejorative, it has been suggested that mapmaking of this kind should be described as “persuasive cartography,” defined as maps intended primarily to influence opinions or beliefs – to send a message – rather than to communicate geographic information.