Hill was the eldest son of Wills Hill, 1st Earl of Hillsborough (later Marquess of Downshire). He matriculated at Magdalen College, Oxford in 1771, and received his M.A. in 1773. [3]

Hill sat as a Tory for the rotten borough of Lostwithiel from 1774 to 1780, and then for Malmesbury until 1784. He also represented Down in the Parliament of Ireland from 1776 until succeeding to the peerage in 1793. [4]

Hill enjoyed a number of civil and military appointments in both England and Ireland during this period. He was commissioned a captain in the Hertfordshire Militia on 22 March 1775, and a lieutenant-colonel in the regiment on 4 May 1787, resigning his commission on 4 June 1794. Appointed the deputy governor of County Down on 6 August 1779, he was picked as High Sheriff of the county in 1785. Hillsborough, as he then was, was chosen a Fellow of the Royal Society on 22 January 1790 and a deputy lieutenant of Berkshire on 12 May 1792. [3]

Upon the death of his father on 7 October 1793, he succeeded him as Marquess of Downshire, in the Peerage of Ireland, as well as in his other subsidiary titles, including that of Earl of Hillsborough in the Peerage of Great Britain. He also succeeded his father as Hereditary Constable of Hillsborough Fort, and as Custos Rotulorum of County Down (16 October) and Governor of Down (17 October). On 7 November, he was appointed to the Privy Council of Ireland.

Downshire vigorously exerted himself against the Union of Great Britain and Ireland in 1800, and was punished by the Government for his opposition by being dismissed from the Governorship of Down and the colonelcy of the Downshire Militia, and struck off the roll of the Privy Council, on 12 February 1800.

His last son, Lord George Hill, was born posthumously, as Downshire died by suicide on 7 September 1801. His widow, Mary, felt his early death was in part due to his humiliation by the Government, and thereafter was a bitter enemy to Robert Stewart, Viscount Castlereagh. She was the heiress of her uncle, Edwin Sandys, 2nd Baron Sandys, and to the estates of her grandfather, William Trumbull, including Easthampstead Park. In 1802, after Downshire's death, she was created Baroness Sandys, with a special remainder to her younger sons and their heirs male in succession and then to her eldest son and his heirs male.

Hill also had a son, William Arthur Dore-Hill, born in 1778, with his mistress Sarah Dore (who later married William Garrow). 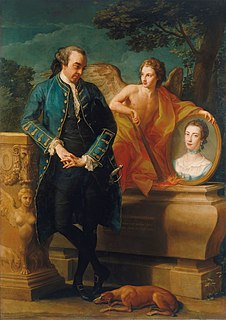 Marquess of Downshire is a title in the Peerage of Ireland. It was created in 1789 for Wills Hill, 1st Earl of Hillsborough, a former Secretary of State. 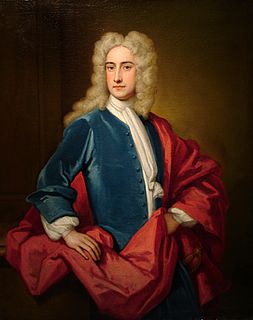 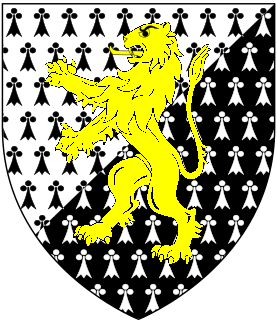 Baron Trevor is a title that has been created three times. It was created first in 1662 in the Peerage of Ireland along with the viscountcy of Dungannon. For information on this creation, which became extinct in 1706, see Viscount Dungannon.

Arthur Hill may refer to:

Easthampstead Park is a Victorian mansion in the civil parish of Bracknell in the English county of Berkshire. It is now a conference centre.

Viscount Dungannon is a title that has been created twice in the Peerage of Ireland. The first creation came in 1662 when Marcus Trevor was made Baron Trevor, of Rostrevor in the County of Down, and Viscount Dungannon. These titles became extinct on the death of the third Viscount in 1706.

Arthur Robin Ian Hill, 8th Marquess of Downshire, known as Robin Hill, was an Irish peer and the Hereditary Constable of Hillsborough Fort. He was the only son of Lord Arthur Francis Hill and Ishabel Wilhelmina Sheila MacDougall. He successfully re-established his Ulster-based landowning family in North Yorkshire following the Irish Land Acts and the creation of Bracknell New Town, which had largely deprived him of his original estates.

Arthur Blundell Sandys Trumbull Hill, 3rd Marquess of Downshire KP was an Anglo-Irish peer, styled Viscount Fairford from 1789 until 1793 and Earl of Hillsborough from 1793 to 1801.

Down was a constituency represented in the Irish House of Commons until 1800.

Arthur Wills John Wellington Trumbull Blundell Hill, 6th Marquess of Downshire was an Irish peer, styled Earl of Hillsborough until 31 March 1874. He lived chiefly at the family seat, Easthampstead Park, within 5,000 acres in Berkshire. The marquess also owned 115,000 acres in Hillsborough, County Down.

Arthur Wills Percy Wellington Blundell Trumbull Hill, 7th Marquess of Downshire was an Irish peer. He lived chiefly at the family seat, Easthampstead Park within 5,000 acres in Berkshire, until the estate was sold to Berkshire County Council after the Second World War. Up to the 1920s he was the last Marquess to have connection with the family mansion with its 115,000 acres of estate in Hillsborough, County Down.