He was born at Cloonyquin, County Roscommon, Ireland, the son of Richard Murphy and Jane French.

He studied at Jesuit run Saint-Omer, France, and was a gifted student of the Latin and Greek classics. He worked as an actor in the theatre, became a barrister, a journalist and finally a (not very original) playwright. He edited Gray's Inn Journal between 1752 and 1754. As Henry Thrale's oldest and dearest friend, he introduced Samuel Johnson to the Thrales in January 1765. He was appointed Commissioner of Bankruptcy in 1803.

Murphy is known for his translations of Tacitus in 1753. They were still published in 1922.

He wrote also three biographies: his 1792 An Essay on the Life and Genius of Samuel Johnson , his 1762 Fielding's Works and his 1801 Life of David Garrick .

Murphy is thought to have coined the legal term "wilful misconstruction" whilst representing the Donaldson v. Becket appeal to the House of Lords in 1774 against the perpetual possession of copyright. He died at Knightsbridge, London, and was buried at Hammersmith, London.

A biography was written in 1811 by Dr. Jesse Foote. Nathaniel Dance painted his portrait which is thought to now be in the Irish National Portrait Collection.

His elder brother used his mother's surname and was known as James Murphy French (1725–59). He lived in London with his brother.

Arthur Murphy was devoted to Ann Elliot and he missed her after her early death. After Arthur Murphy's death this relationship was written about by Fanny Burney who found Murphy's devotion to Eliot fascinating. [1]

An example of Murphy's theatrical writings is The Citizen, a farce, first produced at Drury Lane in 1761. The play included Ann Elliot as Maria. Ann was Murphy's protege and mistress. [2] [3]

Philpot, a wealthy skinflint, has bargained with Sir Jasper Wilding, a fox hunter, for his son Young Philpot, a buck and wastrel, to marry Maria Wilding, and for his daughter Sally to marry Wilding's son, for settlements and twenty thousand pounds paid to Sir Jasper. Young Philpot has lost a fortune, but borrows money from his father and embarks on an insurance fraud involving shipwrecked goods. Maria plans to marry Beaufort, who loves her. As Young Philpot tries to propose, she convinces him she is half-witted, and he spurns her. In the second act, Philpot senior is visiting Corinna, a lady of loose virtue, but hides under the table when his son calls upon her. He overhears as Young Philpot tells her how he has cajoled the money out of his father. Maria's brother surprises them, and old Philpot is also discovered, to their mutual shame. In the final scene Sir Jasper with a lawyer obtains Philpot's signature to the agreements, but meanwhile Maria, an educated girl, shows her strong character to Young Philpot and he again refuses to propose. Having signed away his rights old Philpot offers to marry her, but the lawyer reveals himself as Beaufort, and explains that he has swapped the deeds, so that Philpot has unwittingly signed his agreement for Maria to marry Beaufort.

All dates refer to the play's first production, except where otherwise stated. [4] 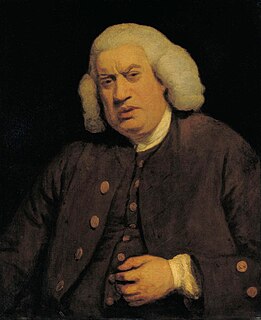 Samuel Johnson, often referred to as Dr Johnson, was an English writer who made lasting contributions to English literature as a poet, playwright, essayist, moralist, literary critic, biographer, editor, and lexicographer. He was a devout Anglican. Politically, he was a committed Tory. The Oxford Dictionary of National Biography describes Johnson as "arguably the most distinguished man of letters in English history". He is the subject of James Boswell's The Life of Samuel Johnson, described by Walter Jackson Bate as "the most famous single work of biographical art in the whole of literature".

Frances Burney, also known as Fanny Burney and later as Madame d'Arblay, was an English satirical novelist, diarist and playwright. Born in Lynn Regis, now King's Lynn, England, on 13 June 1752, to the musician Dr Charles Burney (1726–1814) and his first wife, Esther Sleepe Burney (1725–1762), she was the third of her mother's six children. She began her "scribblings" at the age of ten. In 1786–1790 she was an unusual courtier appointment as "Keeper of the Robes" to Charlotte of Mecklenburg-Strelitz, George III's queen. In 1793, aged 41, she married a French exile, General Alexandre D'Arblay. Their only son Alexander was born in 1794. After a long writing career, and travels in which she was stranded in France by warfare for over ten years, she settled in Bath, England, where she died on 6 January 1840. Of her four novels, the first, Evelina (1778), was the most successful, and remains the most highly regarded. Most of her plays remained unperformed in her lifetime. She also wrote a memoir of her father (1832) and many letters and journals, which have been gradually published since 1889. 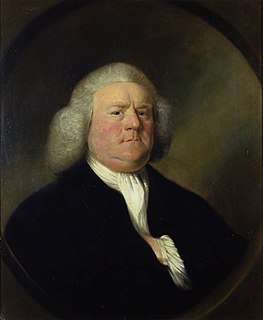 William Boyce was an English composer and organist.

Hester Lynch Thrale was a Welsh-born diarist, author, and patron of the arts. Her diaries and correspondence are an important source of information about Samuel Johnson and 18th-century English life. 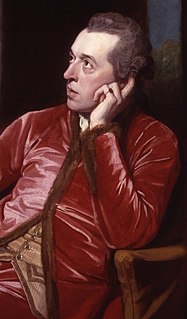 Richard Cumberland was an English dramatist and civil servant. In 1771 his hit play The West Indian was first staged. During the American War of Independence he acted as a secret negotiator with Spain in an effort to secure a peace agreement between the two nations. He also edited a short-lived critical journal called The London Review (1809). His plays are often remembered for their sympathetic depiction of colonial characters and others generally considered to be on the margins of society.
N.b. Cambridgeshire Family History Society have transcribed his baptism record & quote his birth as 19th Feb 1731, Baptism date 5 Mar 1731.
The Oxford University and City Herald 18 May 1811 : Deaths : Richard Cumberland esq., author of the Observer Aged 80.
The Society of Genealogists have a burial record for Richard Cumberland 1731-1811 buried at Westminster Abbey.

Tobias George Smollett was a Scottish poet and author. He was best known for his picaresque novels, such as The Adventures of Roderick Random (1748), The Adventures of Peregrine Pickle (1751) and The Expedition of Humphry Clinker (1771), which influenced later novelists including Charles Dickens. His novels were amended liberally by printers; a definitive edition of each of his works was edited by Dr O. M. Brack Jr to correct such variations.

Henry Thrale was a British politician who sat in the House of Commons from 1765 to 1780. He was a close friend of Samuel Johnson. Like his father, he was the proprietor of the large London brewery, H. Thrale & Co.

Charlotte Lennox, néeRamsay, was a Scottish author and poet, mostly remembered today as the author of The Female Quixote, and for her association with Samuel Johnson, Joshua Reynolds and Samuel Richardson. However, she had a long career in her own right, writing poetry, prose and drama.

Charles Churchill, was an English poet and satirist. 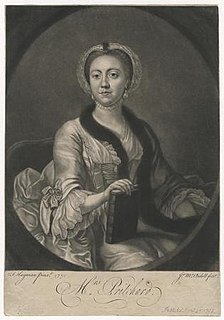 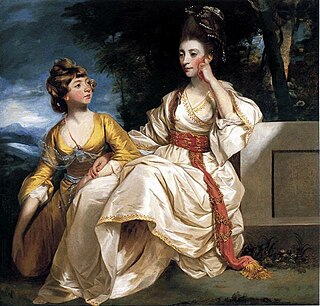 The Streatham Worthies is the collective description for the circle of literary and cultural figures around the wealthy brewer Henry Thrale and his wife Hester Thrale who assembled at his country retreat Streatham Park and were commemorated by a series of portraits by Joshua Reynolds. 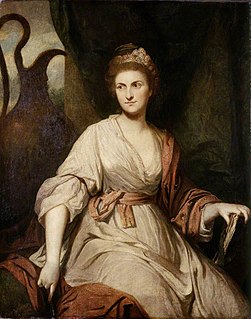 Richard Yates was an English comic actor, who worked at the Haymarket Theatre and Drury Lane among others, appearing in David Garrick's King Lear. He also worked in theatre management, and set up the New Theatre in Birmingham in 1773. Both his first wife, Elizabeth Mary and Mary Anne Graham were actresses.

Hester Maria Elphinstone, Viscountess Keith, born Hester Maria Thrale, was a British literary correspondent and intellectual. She was the eldest child of Hester Thrale, diarist, author and confidante of Samuel Johnson, and Henry Thrale, a wealthy brewer and patron of the arts. She became the second wife of George Elphinstone, 1st Viscount Keith.

John Palmer was an actor on the English stage in the eighteenth century. There was also another John Palmer (1728–1768) who was known as Gentleman Palmer.

John Delap (1725–1812) was an English churchman and academic, known as a poet and dramatist.

David Garrick Between Tragedy and Comedy is a 1761 painting by the English painter Joshua Reynolds, depicting the actor and playwright David Garrick caught between the Muses of Tragedy and Comedy. It is regarded as one of Reynolds's most studied and well-known paintings, and is now in the collection of Waddesdon Manor, Buckinghamshire..

Ann Elliot was a British courtesan and actress. She appeared in comedies in London and Dublin. She had relationships with her mentor Arthur Murphy, with Augustus Hervey, 3rd Earl of Bristol and with Prince Henry, Duke of Cumberland.