George Arthur Rowley Jr. (21 April 1926 – 19 December 2002), nicknamed "The Gunner" because of his explosive left-foot shot, [1] was an English football player and cricketer. He holds the record for the most goals in the history of English league football, scoring 434 from 619 league games. He was the younger brother of Manchester United footballer Jack Rowley. He was shortlisted for inclusion into the English Football Hall of Fame in 2008. [2] [3]

He holds the club record for the most goals in a single season at both Leicester City and Shrewsbury Town, scoring 44 goals in 42 league matches at Leicester in 1956–57 [4] and 38 goals in 43 games for Shrewsbury in 1958–59. He is also Shrewsbury's record league goalscorer with 152 league goals. [5] He is Leicester's second all-time top goalscorer, netting 265 times for the Foxes, 8 goals short of Arthur Chandler's record. [6]

George Arthur Rowley was the third son of Mark Rowley, a well known goalkeeper playing semi-professionally in the Birmingham League. Born in Wolverhampton where he was educated at Dudley Road School and later at St Peter's Collegiate School, he started his career originally as a centre-half before moving up front where his prowess in the forward line won him an early selection into the schools first team. He went on to win local honours with Wolverhampton and County honours with both Birmingham and Staffordshire. He was selected for England schoolboys but the outbreak of the war robbed him of the opportunity. [7]

On leaving school in 1940, Rowley went to work for a sheet metal firm doing war work before joining his older brother Jack in Manchester. Thus Rowley began his career at Manchester United, signing as an Amateur just four days after his 15th birthday. The following day, 26 April 1941, at 15 years and 5 days old, he became the youngest ever player to feature in the Manchester United first team when he lined up alongside Jack in a war-time league match against Liverpool at Anfield.

Rowley went on to play seven times for the United first team before being released in May 1944. [8]

Rowley also played regularly as an amateur at Wolverhampton Wanderers as guest during the war, before turning professional with West Bromwich Albion later in the summer of 1944. However, he struggled at The Hawthorns both to score goals and gain a regular place in the first team.

Albion sold Rowley early in the 1948–49 season to Fulham, where he immediately found his goal-scoring touch, scoring 19 goals in 22 appearance as he helped the side to the Second Division title.

Rowley failed to recapture his form in the First Division as he scored only 7 goals.

At the end of his first season in the top flight he was sold to Leicester City. There was much criticism from Leicester fans originally towards manager Norman Bullock on signing the relatively unproven Rowley as a replacement for the well-liked Jack Lee. However, after a slow start as a centre forward, Bullock moved Rowley into the "number 10" inside left role which is where he would make his name at the Foxes, on 23 September, in which Rowley scored Leicester's consolation goal in a 2–1 defeat to Coventry City." [9] By the end of his debut season, his 28 goals had appeased the crowd, though the club still finished in a disappointing 14th position. [10]

It was in his second season that Rowley began to make a name for himself as he broke Arthur Chandler's club record for the most goals in a season, netting 38 times. He then broke his own record again the following season, scoring 41 times in 42 games, 39 of these goals coming in the league, earning him the Second Division golden boot award. [11] He scored a further 36 goals in the 1953–54 season helping fire Leicester to the Second Division title.

However, Leicester lasted just one season in the First Division as they were relegated back to the second tier at the first attempt. A couple of seasons later, in 1956–57, Rowley broke the club record for the most goals in a season for the third time, scoring 44 times in 42 games (this record still stands today), again earning him the Second Division top goalscorer award and again leading Leicester to the Second Division title. Rowley scored a further 20 times in 25 games in 1957–58 to help Leicester this time avoid relegation back to the second tier.

However Dave Halliday decided to sell Rowley in the summer of 1958 when he was just 8 goals short of Arthur Chandler's club record for the all-time top goalscorer. This led to a loss of faith by the fans and ultimately his sacking 2 months into the 1958–59 season. [9]

In the summer of 1958 Rowley left Leicester, who were playing in the First Division, to become the player-manager of Shrewsbury Town of the newly created Fourth Division. In his first season at the Gay Meadow Rowley led Shrewsbury to promotion with a haul of 38 goals in 43 games, winning the Fourth Division golden boot. [12] He followed that up in the Third Division as he continued scoring prolifically, netting 32, 28, 23 and 24 times over the next four seasons, before falling away in his last couple of seasons with the club as he began to put on weight and became less mobile, but his influence on the pitch was still to be seen, even employing himself as a makeshift defender on occasion, before finally retiring in 1965. [13] [14]

After retiring as a player Rowley managed Shrewsbury for another four years before becoming manager of Sheffield United on 11 July 1968. United had just been relegated to Division Two but despite good signings who would later gain the team promotion, results were disappointing and he was sacked on 6 August 1969.

He managed Southend United from 1970 to 1976 and was also assistant manager of Telford United and manager of non-league Knighton Town and Oswestry Town before leaving football. [15]

Rowley represented Shropshire in three Minor Counties Championship matches between 1961 and 1962 as a right-handed batsman and a leg break bowler.

Rowley made his home in the suburb of Copthorne, Shrewsbury. He continued to visit the Gay Meadow as a spectator. In 2000, he was voted by Shrewsbury Town their 'player of the century'. He died in December 2002 aged 76 and was buried on Saturday 26 December (Boxing Day) in Shrewsbury General Cemetery in Longden Road. [16] His headstone, in Plot 18, describes him as a "record breaking football hero". [7] 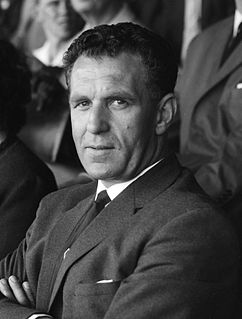 John Frederick Rowley was an English footballer who played as a forward from the 1930s to the 1950s, mainly remembered for a 17-year spell with Manchester United. He was nicknamed "The Gunner" because of his prolific goalscoring and explosive shooting, scoring 211 goals in 424 appearances for United. His younger brother, Arthur, still holds the record for the highest number of career goals scored in the Football League with 434.

Wayne Clarke is an English former professional footballer. Playing as a striker, he scored nearly 150 goals over the course of his career and was a member of the Everton team which finished as English league champions in 1987. He made almost 450 appearances in the Football League, playing for Wolverhampton Wanderers, Birmingham City, Everton, Leicester City, Manchester City, Shrewsbury Town, Stoke City and Walsall. He is the youngest of five brothers. His brothers Frank, Allan, Derek and Kelvin all played league football.

The 1958–59 season was the 79th season of competitive football in England.

Arthur Clarence Hillier Chandler was a professional footballer in the 1920s and 1930s. He is most famous at Leicester City, where he is the club's all-time record goal scorer, with 273 goals, though he also played for Queens Park Rangers and Notts County.

This is the history of Leicester City Football Club, based in Leicester, England, the United Kingdom. Having been founded over 100 years ago, for the first time, in the 2015–16 season, Leicester City won the Premier League, with Claudio Ranieri being the manager. Also, in the same season, the team qualified for the UEFA Champions League.

Johnny Hancocks was an English footballer, most associated with Wolverhampton Wanderers.

The 1991–92 season was the 93rd season of competitive league football in the history of English football club Wolverhampton Wanderers. They played in the second tier of the English football system, the Football League Second Division, in the final season before the introduction of the Premier League.