The provincial capital is the city of Artvin.

Artvin is an attractive area of steep valleys carved by the Çoruh River system, surrounded by high mountains of Kaçkar, Karçal and Yalnızçam (up to 3900 m) and forest with much national parkland including the Karagöl-Sahara, which contains the Şavşat and Borçka lakes. The weather in Artvin is very wet and mild at the coast, and as a result is heavily forested. This greenery runs from the top all the way down to the Black Sea coast. The rain turns to snow at higher altitudes, and the peaks are very cold in winter. [2]

The forests are home to brown bears and wolves. The Çoruh is now being dammed in 11 places for hydro-electric power, including the 249 m Deriner Dam and others at Borçka and Muratlı.

In addition to the ethnic Turks, the province is home to communities of Laz people and Hemshin peoples. Autochthonous Muslim Georgians form the majority in parts of Artvin Province east of the Çoruh River. Immigrant groups of Georgian origins, found scattered in Turkey are known as Chveneburi. [3] In particular, there is a prominent community of Chveneburi Georgians many of them descendants of Muslim families from Georgia who migrated during the struggles between the Ottoman Turks and Russia during the 19th century. With such diverse peoples, Artvin has a rich variety of folk song and dance (see Arifana and Kochari for examples of folk culture). [4]

Artvin is traversed by the northeasterly line of equal latitude and longitude.

In 1924, the Liva Sanjak was abolished and the Artvin Vilayet was created. Artvin Vilayet was combined with Rize to form Çoruh Vilayet with the capital at Rize. Later it was separated into Artvin Province with the districts of Ardanuç, Arhavi, Artvin, Borçka, Hopa, Murgul, Şavşat and Yusufeli. [6]

Artvin province is divided into 8 districts (capital district in bold):

Rize is the capital city of Rize Province in the eastern part of the Black Sea Region of Turkey. 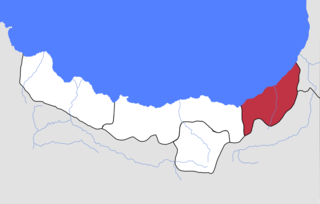 Lazistan was the Ottoman administrative name for the sanjak, under Trebizond Vilayet, comprising the Laz or Lazuri-speaking population on the southeastern shore of the Black Sea. It covered modern day easternmost Trabzon, the land of contemporary Rize Province and the littoral of contemporary Artvin Province.

The Çoruh is a river that rises in the Mescit Mountains in north-eastern Turkey, flows through the cities of Bayburt, İspir, Yusufeli, and Artvin, along the Kelkit-Çoruh Fault, before flowing into Georgia, where it reaches the Black Sea just south of Batumi and a few kilometers north of the Turkish-Georgian border.

The tulum is a musical instrument, a form of bagpipe from the Laz region of Turkey. It is droneless with two parallel chanters, and is usually played by the Laz and Hemshin peoples and by Pontic Greeks, particularly Chaldians. It is a prominent instrument in the music of Pazar, Hemşin, Çamlıhemşin, Ardeşen, Fındıklı, Arhavi, Hopa, some other districts of Artvin and in the villages of the Tatos range of İspir. It is the characteristic instrument of the transhumant population of the northeastern provinces of Anatolia and, like the kemençe in its area, the tulum imposes its style on all the dance and entertainment music of those for whom it is "our music".

Arhavi, is a town and district of Artvin Province located in the Black Sea region of Turkey. The terrain is hilly and mountainous. Area of the city center is about 6 km2 (2.3 sq mi), and the total district area is 314 km2 (121 sq mi). The length of the coast is about 10 km (6.2 mi). In 2011 with 19.362 district population the 5th biggest district population of Artvin province. With 15.622 city population, in Turkey 308th and in Artvin province after Artvin and Hopa the 3rd biggest population. Laz people generate a large portion of the population.

Borçka is a town and district of Artvin Province in the Black Sea region of Turkey, on the border with Georgia.

Fındıklı is a town and district of Rize Province on the Black Sea coast of Turkey, east of the city of Rize.

Hopa is a city and district of Artvin Province in northeast Turkey. It is located on the eastern Turkish Black Sea coast about 67 km (42 mi) from the city of Artvin and 18 kilometres from the border with Georgia. 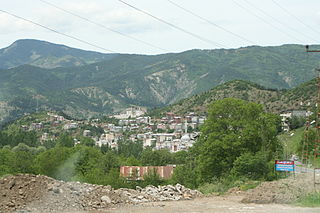 Şavşat is a town and district of Artvin Province in the Black Sea region, between the cities of Artvin and Kars on the border with Georgia at the far eastern end of Turkey.

Yusufeli is a town and district of Artvin Province in the Black Sea region of Turkey. It is located on the bank of Çoruh River 104 km south-west of the city of Artvin, on the road to Erzurum.

Murgul is a town and district of Artvin Province in the Black Sea region of Turkey.

Güreşen (Beğlevan) is a village in Borçka district of Artvin Province, Turkey. Situated at 41°27′N41°38′E it is close to Georgian border to the east and Çoruh River to the south. The distance to Borçka is 22 kilometres (14 mi) and to Artvin is 54 kilometres (34 mi). The population of the Güreşen was 931 as of 2013. Both the former and the present names of the village mean “wrestler”. Main economic activity of the watery village is agriculture.

Demirciler is a village in Borçka district of Artvin Province, Turkey. Situated in the forests, it is to the northeast of Çoruh River. The distance to Borçka is 5 kilometres (3.1 mi) and to Artvin is 37 kilometres (23 mi). The population of Demirciler was 935 as of 2013. The history of the village goes back to Sakas, Mingrelians, Seljukids, and Laz people. The present name of the village means blacksmiths, and it refers to the profession of many village residents.

Nigali or the Nigali valley, also known, through a subsequent metathesis, as Ligani (ლიგანი) or Livana is a historical district on the lower course of the Çoruh or Chorokhi river, currently divided between Turkey and Georgia.

Imerkhevians, are an ethnographic subgroup of Georgians who speak Imerkhevian dialect (imerkheuli) of Georgian language, which shares many common features with the neighboring Adjarian. Imerkhevians are indigenous population of Artvin Province, historical region in northeastern part of Turkey. The Imerkhevians are Sunni Muslims, closely integrated with the Turkish society. Almost all are bilingual in Georgian and Turkish.

Secession in Turkey is a phenomenon caused by the desire of a number of minorities living in Turkey to secede and form independent national states.