The Gold Cup is a Group 1 flat horse race in Great Britain open to horses aged four years or older. It is run at Ascot over a distance of 2 miles 3 furlongs and 210 yards (4,014 metres), and it is scheduled to take place each year in June.

It is Britain's most prestigious event for "stayers" – horses which specialise in racing over long distances. It is traditionally held on the third day of the Royal Ascot meeting, which is known colloquially (but not officially) as Ladies' Day. Contrary to popular belief the actual title of the race does not include the word "Ascot".

The event was established in 1807, [1] and it was originally open to horses aged three or older. The inaugural winner, Master Jackey, was awarded prize money of 100 guineas. The first race took place in the presence of King George III and Queen Charlotte.

The 1844 running was attended by Nicholas I of Russia, who was making a state visit to England. That year's winner was unnamed at the time of his victory, but he was given the name "The Emperor" in honour of the visiting monarch. In return Nicholas offered a new trophy for the race — the "Emperor's Plate" — and this became the title of the event for a short period. Its original name was restored after nine years, during the Crimean War.

It was taken by thieves on 18 June 1907. The theft was never solved, but a replacement was finished by August. Mark Twain, the American humorist, came to London about that time, and was much amused by the twin headlines appearing in The Times :

The Gold Cup is the first leg of Britain's Stayers' Triple Crown, followed by the Goodwood Cup and the Doncaster Cup. The last horse to win all three races in the same year was Stradivarius in 2019.

The Gold Cup is one of three perpetual trophies at the Royal Ascot meeting, along with the Royal Hunt Cup and the Queen's Vase, which can be kept permanently by the winning owners. A number of horses have won it more than once, and the most successful is Yeats, who recorded his fourth victory in 2009.

The Goodwood Cup is a Group 1 flat horse race in Great Britain open to horses aged three years or older. It is run at Goodwood over a distance of 2 miles, and it is scheduled to take place each year in late July or early August. 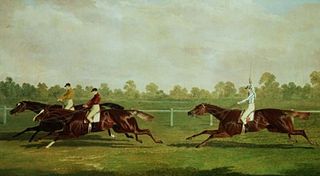 The Doncaster Cup is a Group 2 flat horse race in Great Britain open to horses aged three years or older. It is run at Doncaster over a distance of 2 miles 1 furlong and 197 yards, and it is scheduled to take place each year in September. 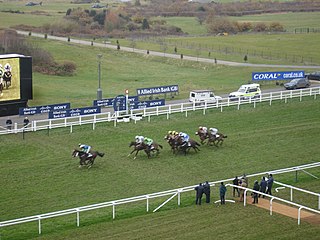 The Yorkshire Cup is a Group 2 flat horse race in Great Britain open to horses aged four years or older. It is run over a distance of 1 mile, 5 furlongs and 188 yards at York in May.

Persian Punch (1993-2004) was a Thoroughbred racehorse trained in the United Kingdom. He was frequently heralded by the Racing Post and his fans as the most popular horse in training during the final years of his career and had his own fan club and website.

Yeats is an Irish Thoroughbred racehorse who won seven Group One (G1) races and is the only horse ever to win the Ascot Gold Cup four times in succession.

The Sagaro Stakes is a Group 3 flat horse race in Great Britain open to horses aged four years or older. It is run over a distance of 1 mile 7 furlongs and 209 yards at Ascot in late April or early May. 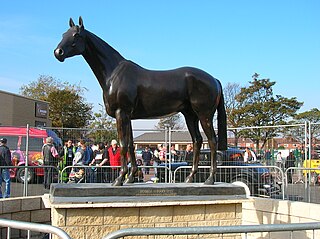 Double Trigger was a Thoroughbred racehorse and active sire. He was bred in Ireland, but trained in the United Kingdom throughout his racing career, which lasted from 1993 to 1998. A specialist stayer, he is best known for winning twelve group races, including the Stayers' Triple Crown in 1995.

Ardross was an Irish-bred Thoroughbred racehorse and sire. Racing at age three, he got his first significant win in the Gallinule Stakes at the Curragh. He also lost by a head to Akiyda in the 1982 Prix de l'Arc de Triomphe, the final race of his career. Ardross first raced for Ireland's Paddy Prendergast and, after his death, was bought by Charles St. George and trained by Henry Cecil in England, winning fourteen of his twenty-four starts, thirteen of them coming at Pattern level. He twice won the Ascot Gold Cup and the Yorkshire Cup. His other major successes came in the Prix Royal-Oak, the Doncaster Cup, and the Goodwood Cup. Before moving to Newmarket, he was runner-up to the Henry Cecil-trained Le Moss in the Ascot Gold Cup. 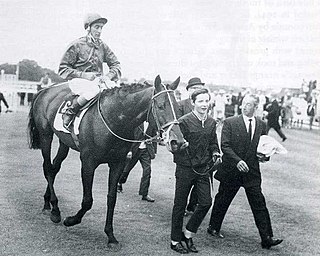 Levmoss (1965–1977) was an Irish Thoroughbred racehorse whose career lasted from 1967 to 1969. He was the leading stayer in Europe in 1969, when he won the premier long-distance races in England and France. In October of that year he moved down to middle distances to win Europe's most prestigious weight-for-age race, the Prix de l'Arc de Triomphe.

Le Moss was a British Thoroughbred racehorse and sire. A specialist stayer, he excelled at distances of two miles and beyond, winning eleven times from fifteen races between 1977 and 1980. He showed good form as a three-year-old, winning the Queen's Vase and finishing second in the classic St Leger Stakes, but reached his peak as an older horse. In 1979 he completed the "Stayers' Triple Crown" by winning the Ascot Gold Cup, Goodwood Cup and Doncaster Cup. He won the same three races as a five-year-old, defeating the future champion Ardross on each occasion, and in doing so becoming the only horse ever to win the "Stayers' Triple Crown" twice. He was then retired to stud where he had some success as a sire of steeplechasers. 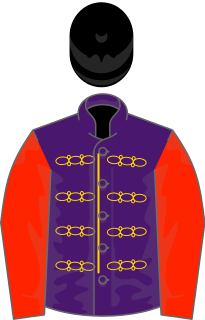 Estimate is an Irish-bred, British-trained Thoroughbred racehorse who won the Queen's Vase at Royal Ascot as a three-year-old. As a four-year-old she won the Sagaro Stakes before returning to Royal Ascot to win the Gold Cup. She is owned by Queen Elizabeth II and trained by Sir Michael Stoute. In 2014 she tested positive to morphine in a post race drugs test and was disqualified from second place in the Gold Cup, but went on to win the Doncaster Cup.

Gildoran was an Irish-bred, British-trained Thoroughbred racehorse and stallion. A specialist stayer he won the Ascot Gold Cup in 1984 and 1985. His other wins included the Sagaro Stakes and the Goodwood Cup. In all, he won seven races in a twenty-two race career which lasted from 1983 until 1985, during which he showed an aptitude for extreme distances and fast ground. He made little impact at stud.

Longboat was a British Thoroughbred racehorse. A specialist over extreme distances, who produced his best form on fast ground, he completed the "Stayers' Triple Crown" in 1986 when he won the Ascot Gold Cup, Goodwood Cup and Doncaster Cup. In all he won nine of his eighteen races between October 1983 and September 1986, with his other major wins coming in the Alycidon Stakes, Sagaro Stakes and Henry II Stakes. He was exported to Australia where he was retired from racing following an injury. He proved a failure as a breeding stallion.

Shoot A Line was a British Thoroughbred racehorse and broodmare. After winning her only race as a two-year-old she developed into one of the best fillies in Europe in 1980, winning the Cheshire Oaks, Ribblesdale Stakes, Irish Oaks, Yorkshire Oaks and Park Hill Stakes. In the following year she failed to win but ran creditably when finishing second to Ardross in the Ascot Gold Cup. As a five-year-old she was campaigned in the United States with little success before being retired to stud. She is the grand-dam of the Kentucky Derby winner Thunder Gulch.

Buckskin was a French-bred Thoroughbred racehorse and sire. Unraced as a two-year-old, he was trained in France in 1976 and 1977 before being transferred to race the United Kingdom in 1978 and 1979. A specialist stayer, he overcame serious physical problems to win several major long-distance races including the Prix du Cadran (twice), Prix de Barbeville, Prix Jean Prat, Doncaster Cup, Jockey Club Cup and Henry II Stakes. He was also the beaten favourite in three successive runnings of the Ascot Gold Cup. After his retirement from racing, he became a very successful sire of National Hunt horses.

Shangamuzo was a British Thoroughbred racehorse and sire best known for winning the Ascot Gold Cup in 1978. A specialist stayer, he won eight of his thirty-four races, finished second nine times and third on five occasions.

Mountain Lodge was a British Thoroughbred racehorse and broodmare. A specialist stayer she finished unplaced on her only start as a juvenile in 1981 but in the following year she won four races culminating with a victory in the Cesarewitch Handicap over two and a quarter miles. As a four-year-old she struggled for form early in the season but returned to her best in autumn to record her biggest victory in the Irish St Leger. Her win in Ireland made her the first older horse to win an Irish classic race. As a broodmare she produced several winners, the best of them being Compton Ace who won the Gordon Stakes and finished third in the Ascot Gold Cup. Through her daughter Beacon, she is the female-line ancestor of The Oaks winner Sariska. 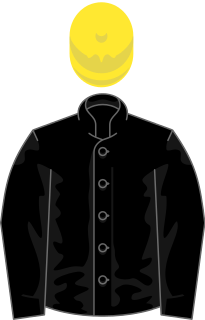 Stradivarius is an Irish Thoroughbred racehorse. After winning one minor race as a two-year-old, he emerged as a top-class stayer in the following year, winning the Queen's Vase and Goodwood Cup as well as finishing a close third in the St Leger. As a four-year-old he won the Yorkshire Cup, Ascot Gold Cup, a second Goodwood Cup and the Lonsdale Cup, securing a £1 million bonus for winning all four races, and ended the year by winning the British Champions Long Distance Cup. In 2019 he repeated his victories in the Yorkshire Cup, Ascot Gold Cup and Lonsdale Cup, and won a third Goodwood Cup, giving him a second £1 million bonus. With jockey Frankie Dettori on board, on 18 June 2020, Stradivarius won his third Ascot Gold Cup and on 28 July 2020, he won his record fourth Goodwood Cup.