Last updated June 01, 2021
Not to be confused with Ashanti Empire.
Region of Ghana
Region in Ghana

The Ashanti Region is located in south Ghana and is third largest of 16 administrative regions (formerly 10), occupying a total land surface of 24,389 km2 (9,417 sq mi) or 10.2 per cent of the total land area of Ghana. In terms of population, however, it is the most populated region with a population of 4,780,380 according to the 2011 census, accounting for 19.4% of Ghana's total population. The Ashanti Region is known for its major gold bar and cocoa production. The largest city and regional capital is Kumasi.

The Ashanti Region is centrally located in the middle belt of Ghana. It lies between longitudes 0.15W and 2.25W, and latitudes 5.50N and 7.46N. The region shares boundaries with six of the sixteen political regions, Bono, Bono East and Ahafo Regions in the north, Eastern region in the east, Central region in the south and Western region in the South west. The region is divided into 27 districts, each headed by a District Chief Executive.

Several festivals are celebrated in the region, the major ones being the Akwasidae and Adae Kese. These are religious festivals celebrated by some members of the Akan ethnic group of which the Ashanti belong. The festivals are celebrated to remember past leaders and heroes. Though they are dead, their spirits are believed to be alive and taking interest in the affairs of the living, watching their actions, and consulting with them during the Adae festival.

The center of population of the Ashanti Region is located in the Kumasi Metropolitan District. According to the 2000 census, the region had a population of 3,612,950, making it the most populous region; however, its density (148.1 per square km) is lower than that of Central (162.2/km2) Region. [5] Majority of Ashanti region's population are Ethnic Akans and citizens by birth (94.2%) with five per cent naturalized Ghanaians. A smaller proportion (5.8%) of the population originate from outside Ashanti and Akanland or Ghana, made up of 3.7 per cent mainly from the five English-speaking countries of ECOWAS and 2.1 per cent from other African countries. The non-African population living in the region is 1.8 per cent of the total population. Akans are the predominant ethnic group in the region, representing 94.2% of citizens by birth. A high proportion (82.9%) of the Akan population is Ashanti. [6]

The Ashanti region is served by the Kumasi Airport, which handles domestic flights. Five national highways – N4, N6, N8, N10 and N6 – and a few regional highways such as the R52 and R106 serve the region.

The N6 connects Kumasi via Kwame Nkrumah Circle and through Nsawam and N4 to Accra. The region is also connected to the Central Region by the N8 and N10, both of which originate from Yemoransa in the Central Region. The N10, however, connects the regional capital of Kumasi.

The Ashanti region has three public universities. In addition, there are a number of private universities and university colleges spread throughout the region.

Further information: List of hospitals in the Ashanti Region

The political administration of the region is through the local government system. Under this administration system, the region is divided into 43 districts made up of 1 Metropolitan, 18 Municipal and 24 Ordinary districts. [8] Each District, Municipal or Metropolitan Assembly, is administered by a Chief Executive, representing the central government but deriving authority from an Assembly headed by a presiding member elected from among the members themselves.

Yaa Asantewaa was the queen mother of Ejisu in the Ashanti Empire – now part of modern-day Ghana – appointed by her brother Nana Akwasi Afrane Opese, the Edwesuhene, or ruler, of Edwesu. In 1900 she led the Ashanti war known as the War of the Golden Stool, also known as the Yaa Asantewaa War, against British colonialism.

Kumasi is a city in Ashanti Region, and is among the largest Metropolitan areas in Ghana. Kumasi is near Lake Bosomtwe, in a rain forest region, and is the commercial, industrial and cultural capital of the historical Ashanti Empire. Kumasi is approximately 500 kilometres (300 mi) north of the Equator and 200 kilometres (100 mi) north of the Gulf of Guinea. Kumasi is alternatively known as "The Garden City" because of its many species of flowers and plants in the past. It is also called Oseikrom.

Osei Kofi Tutu I was one of the founders of the Ashanti Empire, aided by Okomfo Anokye, his chief priest and distant relative. The Asante are an Akan ethnic group of West Africa. Osei Tutu led an alliance of Asante states against the regional hegemon, the Denkyira, completely defeating them. Then, through force of arms and diplomacy, he induced the rulers of the other Asante city-states to declare allegiance to Kumasi, his capital. Throughout his career he was politically advised by Anokye, a cleric whose spiritual authority over the people aided in his founding of the empire. 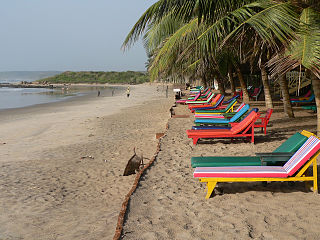 The Komfo Anokye Teaching Hospital also known as GEE for it heavy equipments (KATH) in Kumasi, Ashanti Region, Ghana, is the second-largest hospital in Ghana, and the only tertiary health institution in the Ashanti Region.

The War of the Golden Stool, also known as the Yaa Asantewaa War, the Third Ashanti Expedition, the Ashanti Uprising, or variations thereof, was a violent battle in the series of conflicts between the United Kingdom and the Ashanti Empire, an autonomous state in West Africa that fractiously co-existed with the British and its vassal coastal tribes.

Abusua is the name in Akan culture for a group of people that share common maternal ancestry governed by seven major ancient female abosom (deities). The Abusua line is considered to be passed through the mother's blood . There are several Abusua that transcend the different ethnic subgroups outside of the ancient seven. People of the same Abusua share a common ancestor somewhere within their bloodline, which may go back as far as thousands of years. It is a taboo to marry someone from the same Abusua. The different Abusua are the Agona (parrot), the Aduana (dog), the Asenie (bat), Oyoko (falcon/hawk), the Asakyiri (vulture), the Asona (crow), the Bretuo (leopard), and the Ekuona (bull).

Juaben Senior High School, also known as Juaben SHS, formerly Juaben Secondary School, is a co-educational senior high school in Juaben, a town in the Ejisu-Juaben District of the Ashanti Region in Ghana. 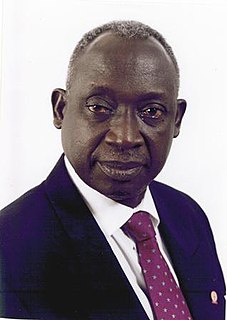 Jacob Kenneth Kofi Kwakye-Maafo, also known as Nana Ohemeng Awere V, is a Ghanaian physician and a surgeon who specialises in Obstetrics and Gynecology and traditional ruler of Assin Nsuta and the chief executive of the West End Hospital, Kumasi. A past president of the Ghana Medical Association, he is an advocate of community health and has helped establish several health centres, rural hospitals and clinics in the Ashanti Region of Ghana notably the Ankaasi Faith Healing Methodist Hospital and the Lake Clinic at Amakom near Lake Bosomtwi. He was a member of the committee set up by the government of Ghana in 2003, tasked with the implementation of the National Health Insurance Scheme in Ghana. 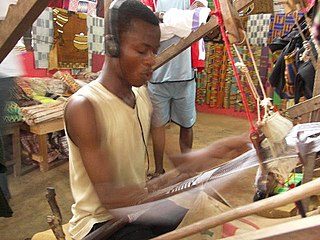 Bonwire is a town in Ghana, where the most popular cloth in Africa, popularly known as "Kente", originated. The Kente is worn by the king of the Ashanti Kingdom in Ghana. Bonwire is part of Ejisu-Juaben Municipal district within Ghana's Ashanti Region. The town is located about 18km on the Kumasi-Mampong road.

Agona-Akrofoso soemtimes called Akrofonso, is a town in the Ashanti Region of Ghana. The town is an hour's drive from Kumasi, the Ashanti regional capital. The official name is Agona Akrofoso,Sekyere South District, Ashanti Region, Ghana.

Offinso, the once capital of Offinso District is a town in the Offinso Municipality in the Ashanti Region of Ghana - the town is about fifteen minutes drive from Kumasi, the capital of the Region; due to Offinso's proximity to Kumasi, many of the Offinso natives have relocated to Kumasi. 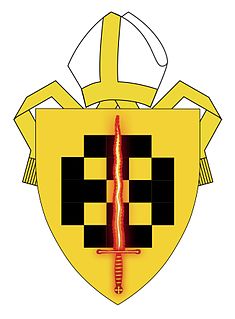 The Anglican Diocese of Asante Mampong was inaugurated on 23 November 2014, having previously been within the Diocese of Kumasi. The first Diocesan Bishop of Asante Mampong is Cyril Kobina Ben-Smith, formerly suffragan bishop under the authority of the Bishop of Kumasi. The new Diocese covers a remote rural and forest area of the Ashanti region and supports practical ministry in education, health and the provision of clean water as a part of its Christian mission.

Nana Oti Akenten was the Asantehene — the ruler of the Asante — from the Oyoko clan of the now-disbanded Asante Kingdom which occupied parts of what is now Ghana. Nana Oti was the brother of Nana Kobia Antwi and their mother was Antwiwaa Nyame. Nana Oti sent his hunter called Bofoo Nyame on a trip and he discovered that the Agona family has already settled in a place called Kwaebrem which was later called Kwaabre. The hunter found out that the land was fertile and came to inform Nana Oti. The ruler and his family with some of his subjects decided to buy that part of the land from Agonaba Obaapanyin Adwoa Nkra Wiri and this settlement was later named Kumasi. It was under his regime that a series of military operations against other Akan states came into alliance with the Asantes. During his reign, there was a trend towards Ashanti military unification.