At-Taḥrīm (Arabic : التحريم‎, "Banning, Prohibition") is the 66th chapter (sura) of the Quran and contains 12 verses (ayah). [1] This is a Surah which deals with questions regarding Muhammad's wives. [2] [3]

Name of the Surah

The Surah derived its name from the words lima tuharrimu of the very first verse. This too is not a title of its subject matter, but the name implies that it is the Surah in which the incident of tahrim (prohibition, forbiddance) has been mentioned. [4]

In connection with the incident of tahrim referred to in this Surah, the traditions of the Hadith mention two ladies who were among the wives of Muhammad at that time Safiyya bint Huyayy and Maria al-Qibtiyya. The former (i. e. Safiyyah) was taken to wife by Muhammad after the conquest of Khaiber, and Khaiber was conquered, as has been unanimously reported, in A. H. 7. The other lady, Mariyah, had been presented to Muhammad by Al-Muqawqis, the ruler of Egypt, in A. H. 7 and she had borne him his son, Ibrahim ibn Muhammad, in Dhu al-Hijjah, A. H. 8. These historical events almost precisely determine that this Surah was sent down some time during A.H. 7 [5] or A. H 8. [6] [7]

Asbāb al-nuzūl, an Arabic term meaning "occasions/circumstances of revelation", is a secondary genre of Qur'anic exegesis ( tafsir ) directed at establishing the context in which specific verses of the Qur'an were revealed. Though of some use in reconstructing the Qur'an's historicity, asbāb is by nature an exegetical rather than a historiographical genre, and as such usually associates the verses it explicates with general situations rather than specific events. According to Sale, the occasion of this chapter was as follows: “There are some who suppose this passage to have been occasioned by Muhammad’s protesting never to eat honey any more, because, having once eaten some in the apartment of Hafsa bint Umar or of Zaynab bint Jahsh, three other of his wives, namely, Aisha, Sawda bint Zamʿa, and Safiyya bint Huyayy, all told him they smelt he had been eating of the juice which distils from certain shrubs in those parts, and resembles honey in taste and consistence, but is of a very strong savour, and which the Prophet had a great aversion to.” [8] Muhammad al-Bukhari recorded that Aisha narrated :

The Prophet (ﷺ) used to stay (for a period) in the house of Zaynab bint Jahsh (one of the wives of the Prophet ) and he used to drink honey in her house. Hafsa bint Umar and I decided that when the Prophet (ﷺ) entered upon either of us, she would say, "I smell in you the bad smell of Maghafir (a bad smelling raisin). Have you eaten Maghafir?" When he entered upon one of us, she said that to him. He replied (to her), "No, but I have drunk honey in the house of Zaynab bint Jahsh, and I will never drink it again." Then the following verse was revealed: 'O Prophet ! Why do you ban (for you) that which Allah has made lawful for you?. ..(up to) If you two (wives of the Prophet (ﷺ) turn in repentance to Allah.' (66.1-4) The two were `Aisha and Hafsa And also the Statement of Allah: 'And (Remember) when the Prophet (ﷺ) disclosed a matter in confidence to one of his wives!' (66.3) i.e., his saying, "But I have drunk honey."... [9]

The theme of Surah At-Tahrim is to inform Muslims how, at times of showing love and affection, they should try to keep themselves and their families within the limits prescribed by God. Moreover, it is emphasized that each person should remain aware that the only thing that will be of avail to him before God is his deeds. In their absence, association with the greatest of personalities will not be of any benefit.

The first and foremost exegesis/tafsir of the Qur'an is found in hadith of Muhammad. [10] Although scholars including ibn Taymiyyah claim that Muhammad has commented on the whole of the Qur'an, others including Ghazali cite the limited amount of narratives, thus indicating that he has commented only on a portion of the Qur'an. [11] Ḥadīth (حديث) is literally "speech" or "report", that is a recorded saying or tradition of Muhammad validated by isnad; with Sirah Rasul Allah these comprise the sunnah and reveal shariah. According to Aishah, [12] [13] the life of Prophet Muhammad was practical implementation of Qur'an. [14] [15] [16] Therefore, mention in hadith elevates the importance of the pertinent surah from a certain perspective. Ibn Abbas is known for his knowledge of traditions as well as his critical interpretation of the Qur'an. From early on, he gathered information from other companions of Muhammad and gave classes and wrote commentaries. [17]

Placement & Coherence with other surahs

The idea of textual relation between the verses of a chapter has been discussed under various titles such as nazm and munasabah in non-English literature and coherence, text relations, intertextuality, and unity in English literature. Hamiduddin Farahi, an Islamic scholar of the Indian subcontinent, is known for his work on the concept of nazm, or coherence, in the Quran. Fakhruddin al-Razi (died 1209 CE), Zarkashi (died 1392) and several other classical as well as contemporary Quranic scholars have contributed to the studies. [19]

This surah is the last surah of 6th group of surahs which starts from surah Qaf (50) and runs till At-Tahrim(66) and the recurring theme of this section of Quran is Arguments on afterlife and the requirements of faith in it. [20] [ circular reference ] With regards to the subject-matter, this surah forms a pair with the previous one (At-Talaq). [21] Tadabbur-i-Quran is a tafsir (exegeses) of the Qur'an by Amin Ahsan Islahi based on the concept of thematic and structural coherence, which was originally inspired by Allama Hamiduddin Farahi. The tafsir is extended over nine volumes of six thousand pages. It describes At-Tahrim as a supplement to the previous surah with respect to the central theme. [22] According to Javed Ahmad Ghamidi

Surah al-Talaq (65) and Surah al-Tahrim (66) both these surahs form a pair with regard to their subject-matter. In the first surah, the limits which should be observed by a believer while parting from wives are explained while in the second surah, the limits he should observe at instances of expressing love to them are described. Both surahs are addressed to the Muslims, and it is evident from their subject-matter that they were revealed in Madinah in the tazkiyah wa tathir phase of the Prophet Muhammad’s (sws) preaching mission. [23] [24] 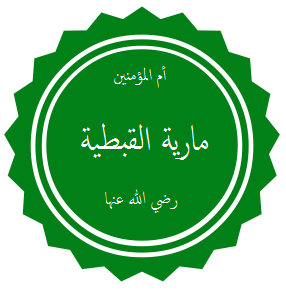 Maria bint Shamʿūn, better known as Maria al-Qibtiyya, Maria Qubtiyya, or Maria the Copt, was an Egyptian who, along with her sister Sirin, were sent to the Islamic prophet Muhammad in 628 as a gift by Muqawqis, a Christian governor of Alexandria, Egypt during the territory's Persian occupation. She and her sister were slaves. She spent the rest of her life in Medina where she embraced Islam and lived with the Prophet Muhammad when she bore a son, Ibrahim. The son would die as an infant and then she died almost five years later.

al-Qalam is the sixty-eighth chapter (sūrah) of the Qur'an with 52 verses (āyāt). The Surat describes Allah's justice and the judgment day. Three important themes of this Surah are response to the opponents objections, warning and admonition to the disbelievers, and exhortation of patience to the Islamic prophet Muhammad. Chronologically, this is the first appearance of any of the "disjointed" [i.e., single] letters (muqattaat) which precede a number of the surahs of the Qur'an while in Quranic Order this is the last surah to have the appearance of (muqattaat).

Sūrat aṣ-Ṣaff is the 61st chapter (sura) of the Quran with 14 verses. This sura is an Al-Musabbihat sura because it begins with the glorification of Allah.

Sūrat al-Jumu`ah is the 62nd chapter (surah) of the Quran with 11 verses. The chapter is named al-jumu`ah ("Friday") because it is the day of assembly, when the community abandons trade, transactions and other diversions in favor of assembling to seek the all-encompassing truth and most beneficent and seek the "bounty of God" exclusively. This surah is an Al-Musabbihat surah because it begins with the glorification of God.

Sūrat al-Munāfiqūn is the 63rd chapter (surah) of the Qur'an with 11 verses.

Sūrat al-Infiṭār is the 82nd sura of the Qur'an with 19 ayat. The chapter is named ‘Al-Infitar’ because of the occurrence of the word ‘unfatarat’, in the first verse of this chapter. Infitar means ‘split asunder’. This word, ‘Unfatarat’ is used in this chapter in order to describe the splitting the sky on the day of Judgment. This chapter (Al-Infitar), along with Chapter At-Takwir and Al-Inshiqaq provide exhaustive description about ‘Day of Judgment’.

Sūrah al-Muṭaffifīn is the eighty-third surah of the Qur'an with 36 ayat.

Sūrat al-Māʻūn is the 107th sura of the Qur'an with 7 ayat. Regarding the timing and contextual background of the supposed revelation, it is an earlier "Meccan surah", which means it is believed to have been revealed in Mecca, instead of later in Medina.

The Quran enumerates little about the early life of the Islamic prophet Muhammad or other biographic details, but it talks about his prophetic mission, his moral excellence, and theological issues regarding him. According to the Quran, Muhammad is the last in a chain of prophets sent by Allah.