The Athens Conservatoire (Greek : Ωδείο Αθηνών) is the oldest educational institution for the performing arts in modern Greece. It was founded in 1871 by the non-profit organization "Music and Drama Association".

Initially, the musical instruments that were taught there were limited to the violin and the flute, representative of the ancient Greek Apollonian and Dionysian aesthetic principles. [1] Significantly, piano lessons were not included in the program. In 1881 its new German-taught director Georgios Nazos, in a move that was controversial at the time, expanded the conservatoire's program by introducing modern Western European-style instruments and theory material. [2]

The first Drama School in Greece was also founded in 1871 on the premises, with many prominent theater personalities were included in its teaching staff, such as: Aimilios Veakis, Dimitris Rontiris, Kostas Mousouris, Dimitris Myrat and others. [2]

The institution also runs a Dance School which originated from the establishment of a rhythmic dance school in 1935, which however seized operations a few years after. The school reopened as a fully fledged Dance School in 2011 and in 2018 it gained an official professional accreditation status by the Greek Ministry of Culture. [3] [4]

The Athens Conservatoire is located on Rigillis Street and Vasileos Konstantinou Avenue. [5] The building's facade measures 160 meters the whole building is 13,000 square meters in size. [6] It is an exceptional example of the Bauhaus school and the modern movement in Greece. [7] Designed by the Greek architect Ioannis Despotopoulos (also known as Jan Despo), the only Greek to have studied under Bauhaus school founder Walter Gropius, [8] the Conservatoire is the only completed part of an ambitious large-scale cultural complex commissioned in 1959 by the then government for Athens, for which he earned the top architectural prize of its time. The construction begun in 1969 and stopped in 1976, due to a lack of funding, [8] leaving the building unfinished. [9] In 1980, the Greek state undertook the cost of completing the work in exchange for ownership of the conservatory’s old headquarters on Pireos Street. [10]

Despotopoulos' complete proposal for the Athens Cultural Center involved remodeling the space that stretches from Vasilissis Sofias Avenue to Vasileos Konstantinou Avenue, and from Rigillis Street all the way to the National Gallery, spanning an area of nearly 150,000 square meters. According to Despotopoulos' archives on file at the Modern Greek Architecture section of the Benaki Museum, in addition to the Athens Conservatoire, his plan foresaw the construction of an 1,800-seat opera house, a circular theatre stage, an extension to the National Gallery, a new Byzantine Museum, a Byzantine-style church, a hotel, a hall for classical dance performances and the state orchestra, a playhouse for experimental theater, underground garages and more. [7]

A large part of the underground floors of the building was used to host the National Museum of Contemporary Art, Athens (EMST), between September 2008 and May 2015. [11] The venue still hosts important events and cultural exhibitions [12] in Athens.

Since 2013 the Athens Conservatoire entered a new chapter [13] with a series of renovations and the hosting of important cultural events. In 2016, a particular space, located in the first basement area of the building, was fully refurbished and used for the first time since construction, thanks to a generous donation from NEON Organisation, a cultural non-profit institution founded by the art collector and businessman Dimitris Daskalopoulos. The space, since named Polihoros Ω2, [14] is completely transformed into an exhibition space which also contains a small theatre stage [8] and regularly hosts various cultural and artistic events. [15]

Between 8 April and 16 July 2017, the Athens Conservatoire was one of the four main partner venues of the documenta 14 international art exhibition which was, for the first time in its history, hosted in Athens along with its main and original location in Kassel, Germany. For the needs of the exhibition, most open public spaces inside and outside the building were dedicated to the artistic events, needs and exhibits of documenta 14. [16] [17] [18] [19] One of the spaces used for this exhibition is the Amphitheatre, situated underground, which is architecturally inspired by the ancient theatres of Greece. The space hosted a sound installation art project by the Nigerian artist Emeka Ogboh named The Way Earthly Things Are Going [20] and was one of the rare occasions where the space has been open to the public.

In December 2017 the Aris Garoufalis Concert Hall, situated on the upper level of the building, was also completely renovated, [21] [22] architecturally and acoustically, thanks to a donation by the Friends of Aliki Vatikioti for Music and the Arts Foundation. [23] The concert hall now regularly hosts concerts, music competitions, music exams, rehearsals and other cultural events.

The Greek National Conservatoire was founded in Athens in 1926 by the composer Manolis Kalomiris and notable artists like Charikleia Kalomoiri, Marika Kotopouli, Dionysios Lavrangas, and Sophia Spanoudi. For some time the conservatoire was the only Greek educational and cultural organization to approach international Greek community by opening branches in Egypt and Cyprus (1948). Over the years, many well-known artists cooperated with the conservatoire, like Maria Callas, Gabriel Pierné, Dimitris Mitropoulos, and Avra Theodoropoulou. Among the conservatoire's students were Maria Callas, Leonidas Kavakos, Agnes Baltsa, and Manto. When the Greek National Opera was founded in 1940, two thirds of its resident staff were graduating students or graduates of the sources National Conservatoire.

Nikos Hadjikyriakos-Ghikas, also known as Niko Ghika, was a leading Greek painter, sculptor, engraver, writer and academic. He was a founding member of the Association of Greek Art Critics, AICA-Hellas, International Association of Art Critics.

Vasilissis Sofias Avenue is a major avenue in the east side of Athens, the Greek capital. The avenue was originally part of the Kifisias Avenue. The part from Syntagma Square to the intersection with Alexandras Avenue was renamed after Queen Sophia, the consort of King Constantine I. The avenue begins at the intersections of Amalias Avenue and Panepistimiou Street and ends by Alexandras, Kifissias and Mesogeion Avenues as well as Feidippou Street, with a total length of approximately 3 km. A section of the avenue is part of the old GR-1, and a branch of GR-54.

The Acropolis Museum is an archaeological museum focused on the findings of the archaeological site of the Acropolis of Athens. The museum was built to house every artifact found on the rock and on the surrounding slopes, from the Greek Bronze Age to Roman and Byzantine Greece. It also lies over the ruins of a part of Roman and early Byzantine Athens.

Dimitris Potiropoulos was born in Athens in 1953. He is the son of Rigas and Aliki. He studied Architecture at Technische Hochschule Darmstadt, in Germany. During his studies, he served as a Scientific Associate at the Chair of Free Hand Drawing from 1978 to 1980. He specialized in Architectural Design and was awarded a special commendation for his project “Residential Proposal in the Historical Centre of Reutlingen”. He completed his studies in 1981. 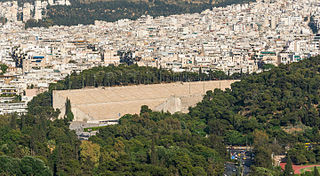 Pangrati or Pagrati is a neighborhood in Central Athens, Greece, having an estimated population of 35,173 residents. Named after the ancient sanctuary of Hercules Pancrates, its frontage runs from Vasilissis Sofias Avenue along to Vasileos Konstantinou Avenue and Vassileos Alexandrou Avenue, just a few minutes walk from the National Gardens. One of the most important landmarks of Pangrati is the Panathinaiko Stadium that hosted the first modern Olympic Games in 1896. The First Cemetery of Athens, the official cemetery for the City of Athens, lies within the neighborhood's limits.

Lina Stergiou is an architect, cultural researcher, writer and curator, and associate professor who uses multiple formats spatial politics and the avant-garde, actively practiced and presented in conferences and symposia, and as essays and chapters to books, receiving the Princeton University Stanley J. Seeger Research Fellowship, 13 research grants and 2 research prizes, 7 teaching prizes and 11 design prizes.

Athens – Epidaurus Festival is an annual arts festival that takes place in Athens and Epidaurus, from May to October. It is one of the most famous festivals in Greece. The festival includes musical, theatrical and other cultural events.

The National Museum of Contemporary Art, established in October 2000, is the sole national institution focused only on collecting and exhibiting contemporary Greek and international art in Athens. Anna Kafetsi, Ph.D in Aesthetics- Art History and former curator for 17 years of the 20th century collection at the National Gallery of Athens, was appointed founding director of EMST.

George Nazos was a Greek music teacher and director of the Athens Conservatoire. He was from a well-known family from Tinos Island. He was recognized for his musical talent at a young age. In 1881 he went to Munich, Germany to study piano and advanced theory, returning to Greece in 1886.

Athanasios Argianas is a Greek and British artist living and working in London, England. Argianas' practice is interdisciplinary; incorporating sculpture, painting, text, performance and often music or sound, and concerns itself with metaphorical or translated representations of aural experiences. He received his MA from Goldsmiths College, London and previously studied under Jannis Kounellis at the Kunstakademie Düsseldorf. 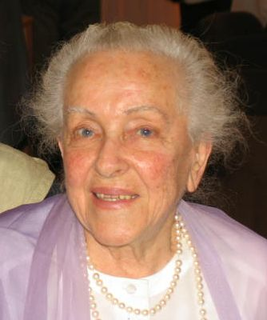 George Zongolopoulos was an important Greek sculptor, painter and architect. Zongolopoulos, who was often called the “eternal teenager” was a representative of the so-called “Generation of 1930s” while his work extends from the 1920s until his late life.

Modern architecture in Athens flourished during two periods, between 1930 and 1940, and between 1950 and 1975. Influenced by the European modern movement led by Le Corbusier and other architects, Greek architects tried to adapt these principles into Greek practice. However, conservatism was often a hindering factor and usually both classically inspired as well as modernist buildings were built during the same periods.

Pavlos Samios was a Greek painter and professor at the Athens School of Fine Arts.

Alexis Akrithakis was a Greek contemporary artist renowned for his paintings and wooden constructions. His works have been described as "speaking an unmistakable language. They stand on their own and are original, but are yet influenced by the particular Zeitgeist - between Arte Povera and Actioninsm".

Sozita Goudouna is a curator, professor and the author of Beckett's Breath: Anti-theatricality and the Visual Arts on Samuel Beckett's Breath, one of the shortest plays ever written for the theatre, published by Edinburgh University Press and released in the US by Oxford University Press. According to William Hutchings' review at the Comparative Drama Conference Series 15, Goudouna's book is surely the most ever said about the least in the entire history of literary criticism.

Eleni Mylonas is a Greek born American artist based in Soho, New York City and Athens, Greece. She is a multidisciplinary artist with a background in journalism and photography, with works in traditional media, video art and performance. Eleni Mylonas is a Fulbright scholar.