Atromitos was officially founded on 31 May 1923 when Kalomvounis, Petos, Glykofridis, Stathopoulos, Synodinos, Rigopoulos, Stamatopoulos, and other students living in Victoria Square, (which was then called Kyriakou Square) decided to form a football team. [2] That same year, Vaggelis Stamatis, a mathematics teacher and member of the Panhellenic football league, joined Atromitos' administration board – because of his prominence in pre-war Greek football history, Stamatis' involvement increased the new team's stature in Athenian football. [2] [3]

In 1924, Atromitos was accepted into the Greek football league. [2] At the time, Atromitos played at Aris Park, which was the home ground of Panellinios and Panathinaikos. [2] During their first season in the league's first division, they ended in third place behind Panathinaikos and AEK. [2] In 1928, they defeated Goudi 4–3 in the final game at Rouf Stadium to become champions of Athens. [2] That same year, they took part in the first Panhellenic Championship as Athens champions, which was organised by the HFF. [4] On 24 May 1928, they were beaten 3–1 by Aris Thessaloniki (who later became champions) in an away game, and were defeated again on 3 June by Ethnikos Piraeus (5–0). On 10 June, they managed a draw at home against Ethnikos (1–1), before losing again to Aris 3–1 seven days later. [2] Overall in the national championship, Atromitos finished third. [4]

In 1932, Ioseph Chourouktsoglou and Nikolaos Epioglou decided to move Atromitos to Peristeri. Earlier, it was located in the same area as Panathinaikos, and they had found it hard to establish a large fan base or develop a unique identity. There, they formed a merger with the local team of Astir Peristeriou (meaning "Star"), from which comes the crest of Atromitos, a blue star. [8]

Before occupation of Greece, they played again in Panhellenic championship in the season of 1938–39.

Atromitos played in the second division until May 1972 when, under the coaching of Savvas Papazoglou, they were re-promoted to the first level. It proved a change too hard to handle, and they were demoted the following year. In 1975, a better-prepared Atromitos returned to the first division with a large fanbase, and ended the year in 13th place, securing their spot in the top flight. In 1976, they improved to end the season in 9th place, the best in the club's history. But, they were relegated in 1977.

By 1981, Atromitos had succeeded in attracting renowned players such as Stylianopoulos, Álvarez, Toskas and Athanasopoulos. However, despite high expectations, the club finished last in the top flight, and once more returned to the lower divisions. After years of playing in the third division, Atromitos won promotion back to the second division in May 2002 by beating Levadiakos at Patras Stadium. The team played again in the top flight between 2005–2008 by merging with Chalkidona [9] and returned to the top flight after playing one season in the second division in 2008–09. [10] [11]

Atromitos finished the 1st half of the season in 4th place, together with Asteras Tripolis and 14 points from the top, but 4 points from 6th place, that doesn't redirect to the playoffs. On 6 January 2013, at the debut of Nikos Anastopoulos in the coaching position and the Portuguese footballer Fabio, Atromitos beat Kerkyra 2–0, with two headers. From Sokratis Fytanidis at the 26th minute and from Stathis Tavlaridis at the 31st minute. In other words, the win was awarded to the team by the two centre backs. The team stayed in 4th with Asteras Tripolis, but now 6 points from the 6th place. One matchday later, they managed to get the 0–0 from PAOK at Toumba, [13] retaining the 6 points difference from PAS Giannina. On Matchday 18, they beat Platanias 1–0, getting to be only 3 points from 2nd place. The goal was scored by Eduardo Brito.

For the 2015–16 season, Atromitos has achieved an important qualification to the UEFA Europa League playoffs after recording two wins against AIK Stockholm, 3–1 in the first game in Sweden and 1–0 in the rematch at Peristeri Stadium. There they faced highly rated Fenerbahçe S.K. of Turkey. They lost 0–1 in the first match at Peristeri Stadium and 0–3 in the rematch in Turkey and were eliminated.

The home ground of Atromitos was once well-maintained but has been recently neglected. In its early days, Peristeri had grown to become the fourth largest municipality in Greece. The first club home ground was the grounds of "Bravery", which was located beyond the last shanty town of Evangelistria.

In 1953, Atromitos moved to their present location, which contained only central stands for the spectators; the changing rooms consisted of a small room at the end of the stands. Much later, a larger stand was built with a capacity of 6,000 spectators. It was also used for non-football purposes, such as musical performances.

During the chairmanship of Victor Mitropoulos in EPAE, blue and white plastic seats were installed in the central stand. Before the Athens Olympics, Atromitos installed floodlights and renovated the running track so the ground could be used as a coaching facility during the Olympic Games. Under the football ground there are spaces and facilities for activities such as wrestling, chess and boxing. [21]

Repairs to fragile parts of the stadium due to humidity and earthquake damage are expected to be carried out.

Since summer of 2007, Atromitos possesses a modern Sports Complex, located in the center of Peristeri. [22] During the summer of 2004, this same Sports Complex has been used as the Peristeri Olympic Boxing Hall and includes a 3,000 spectators main pitch, an auxiliary pitch as well as a 5-a-side pitch, such as the club's offices. [23]

Atromitos are based in western Athens and their main supporters club is called "Fentagin". [27] Founded in 1980, they have a space underneath the stands. They are dedicated to support the local football club and their anti-fascist and anti-racist ideas and actions. [28] The younger element of the support are known as the "Little Atoms".

Seasons in the 21st century

AEK Football Club is a Greek professional football club based in Nea Filadelfeia, a suburb of Athens, Greece.

Nikolaos "Nikos" Liberopoulos is a retired Greek former professional international footballer who played as a striker. He is famous for his aim-to-goal shot, his innate in-play instincts, and his technical attacking skills. Liberopoulos is a unique player in Greek domestic football, as he is equally adored by fans of both AEK Athens and Panathinaikos. He is the only player to be recorded in the top ten scorers of all time for both these teams. Indeed, after seven seasons at Panathinaikos Liberopoulos scored 103 goals. On 10 May 2012, he reached a milestone 100 goals for AEK Athens after a brace against Atromitos, making him the only player in history to score a hundred goals for both Athens clubs. On 8 September 2017, he became the Technical Director of AEK.

Stathis Tavlaridis is a Greek retired football defender. Tavlaridis has earned the nickname "Taureau" in France which means "The Bull" due to his aggressive style of play.

Fostiras Football Club is a Greek football club based in Tavros, a suburb of Athens, Greece. They play in the Gamma Ethniki, the fourth tier of the Greek football league system. They played Alpha Ethniki between 1960 and 1963 and again between 1970 and 1974.

Lazaros Christodoulopoulos is a Greek professional footballer who plays for Cypriot club Anorthosis Famagusta. He plays as a winger or a second striker.

The members of Lesxi Filon Ari elected Thanasis Athanasiadis as the new president of Aris Thessaloniki in the elections that took place in May.

The 2011–12 Super League Greece was the 76th season of the highest football league of Greece and the sixth under the name Super League. The season began in late August or early September 2011 and ended in May 2012 with the last matches of the European playoff round. Olympiacos are the defending champions, having won their 38th Greek championship in the 2010–11 season.

AEK Athens F.C. competed for the 53rd consecutive season in the Greek top flight and 87th year in existence as a football club. They started their European campaign in the UEFA Europa League Play-off round.

Victoras "Víctor" Klonaridis is a Greek-Belgian professional footballer who plays as a winger or a second striker for Atromitos.

The 2012–13 Super League Greece was the 77th season of the highest football league of Greece and the seventh under the name Super League. The season started on 25 August 2012 and ended on 2 June 2013 with the last matches of the European playoff round. Olympiacos were the defending champions, having won their 39th Greek championship in the 2011–12 season. They successfully defended their crown, finishing 15 points ahead of second-placed PAOK. 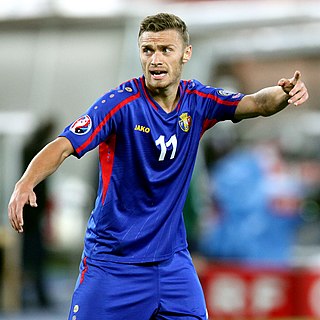 Nicolae Milinceanu is a Moldovan professional footballer who plays as a forward for Greek club PAS Giannina. 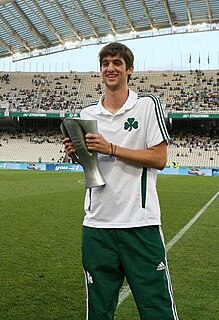 Spyros Risvanis is a Greek professional footballer who last played as a centre-back for Cypriot club Anorthosis.

The 2015–16 season was AEK Athens Football Club's 55th competitive season in the top flight of Greek football, 7th season in the Super League Greece, and 91st year in existence as a football club. They also competed in the Greek Cup.

The 2017–18 Super League Greece, or Souroti Super League for sponsorship reasons, was the 82nd season of the highest tier in league of Greek football and the 12th under its current name. The season started on August 2017 and ended in May 2018. The league comprises fourteen teams from the 2016–17 season and two promoted from the 2016–17 Football League.

The 2018–19 Panathinaikos season is the club's 60th consecutive season in Super League Greece. They are also competing in the Greek Cup.

The 2019–20 season was AEK Athens' 59th competitive season in the top flight of Greek football, 10th season in the Super League 1, and 96th year in existence as a football club. They also compete in the Greek Cup and in the UEFA Europa League. The season covers the period from 1 July 2019 to 12 September 2020.

This article concerns football records in Greece and it includes the top flight and lower divisions as well.