Count Augustinos Ioannis Maria Kapodistrias (Greek : Αυγουστίνος Ιωάννης Μαρία Καποδίστριας, 1778–1857) was a Greek soldier and politician. He was born in Corfu. [1] and studied geology. Augustinos Kapodistrias was the younger brother of Viaros Kapodistrias and of the first Governor of Greece Ioannis Kapodistrias.

After Ioannis's assassination on October 9, 1831, Augustinos succeeded his brother as head of the governing council, and at the office of governor. His six-month rule was marked by political instability and the country's slide to anarchy.

Kapodistrias may refer to:

Petros Mavromichalis, also known as Petrobey, was the leader of the Maniot people during the first half of the 19th century. His family had a long history of revolts against the Ottoman Empire, which ruled most of what is now Greece. His grandfather Georgios and his father Pierros were among the leaders of the Orlov Revolt.

Andreas Metaxas was a Greek politician, fighter of the Greek War of Independence and diplomat from Cephalonia. He was prime minister of Greece from 3 September 1843 to 16 February 1844. Some military leaders of the revolution (Makriyannis) gave him the ironic nickname of "Conte Lalas'" due to his injury during the Battle of Lalas.

Dimitrios Kallergis was a fighter of the Greek War of Independence, major general, politician and one of the most important protagonists of the 3 September 1843 Revolution.

The First Hellenic Republic is a historiographical term for the provisional Greek state during the Greek War of Independence against the Ottoman Empire. It is used to emphasize the constitutional and democratic nature of the revolutionary regime prior to the establishment of the independent Kingdom of Greece, and associate this period of Greek history with the later Second and Third Republics.

Augustino is a masculine given name. Notable people with the name include:

Count Ioannis Antonios Kapodistrias, sometimes anglicized as John Capodistrias, was a Greek statesman who served as the Foreign Minister of the Russian Empire and was one of the most distinguished politicians and diplomats of Europe. After a long and distinguished career in European politics and diplomacy he was elected as the first head of state of independent Greece (1827–31). He is considered the founder of the modern Greek state, and the architect of Greek independence. 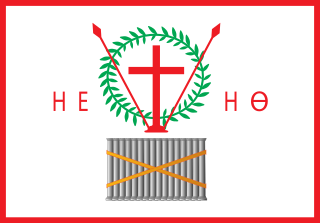 The Military-Political System of Samos was a provisional regime that existed in the island of Samos during the Greek War of Independence.

Kapodistrias reform is the common name of law 2539 of Greece, which reorganised the country's administrative divisions. The law, named after 19th-century Greek statesman Ioannis Kapodistrias, passed the Hellenic Parliament in 1997, and was implemented in 1998. The administrative system was changed again at the 2010 Kallikratis reform. 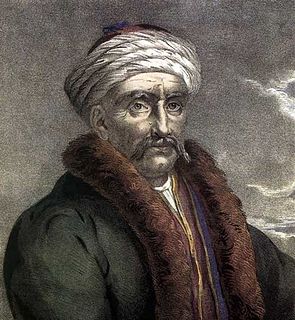 Panoutsos Notaras was a leading figure of the Greek War of Independence, serving several times as president of the Greek national assemblies and legislative bodies.

Ioannis (Giannakis) Stratos (1793–1848) was an armatole and fighter of the Greek War of Independence. After the establishment of the Greek state, he became an officer of the Royal Phalanx.

Viaros Kapodistrias was a Greek politician, lawyer and member of the Filiki Eteria, a secret organization whose purpose was to overthrow the Ottoman rule of Greece and establish an independent Greek state. He was brother of Governors of Greece Ioannis Kapodistrias and Augustinos Kapodistrias. 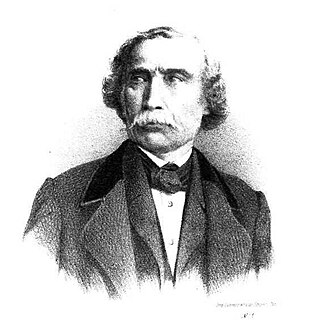 A new legislative body called the Senate(Greek: Γερουσία) was created in 1829 by the Fourth National Assembly at Argos, replacing the prior advisory body called the Panellinion which had been founded by Governor Ioannis Kapodistrias the previous year.

The Administrative Committee of Greece of 1831 was a committee that was created to temporarily assume the executive powers that had been left vacant with the assassination of Governor Ioannis Kapodistrias. The Committee came into being in December 1831 and was dissolved in February or March 1832.

Konstantinos Doumbiotis was a Greek revolutionary and military officer.