Originally a part of the Australian Labor Party (New South Wales Branch), the ALP National Conference established an autonomous ACT Branch in 1973. [1] There have been four Labor Chief Ministers since self-government in 1989. The most recent is the current Chief Minister, Andrew Barr, who has served since 2014.

The current ACT Labor Platform notes that the objective of the party is social justice and the pursuit of a fair, just and equitable society. [2]

In 1930, the first ACT ALP Branch was established as part of the NSW party. The first meeting was held at the Friendly Society's hall at Kingston. The party endorsed candidates for the Advisory Council and also for the Canberra Community Hospital Board.

In 1931, the Branch called a meeting of trade union representatives which resulted in the formation of the ACT Trades and Labour Council. During the 1940s the party continued to grow. It met monthly in either the Civic or Kingston Hotels.

The party lobbied for federal representation and in 1949, Canberrans elected their first federal member. Initially an independent was elected but shortly after Jim Fraser won the seat for the ALP. Fraser held the seat for 19 years until his death. However he was limited to voting only on Territorial matters until 1966.

1968 saw a challenge to the preselection of Jim Fraser within the ALP. The issue was the Vietnam War and it involved a North-South split. The contender Gordon Walsh won the preselection, but this was later overturned by the NSW Branch.

During this time the Australian National University was a major source of members of the party and various academics were active participants in its affairs. For example, in 1968 the Canberra City (North) Branch had 118 members of which 13 were undergraduates, 14 were postgraduate students and 10 were academics.

In 1973 the ALP National Conference established an autonomous ACT Branch and the present structure was established. The ACT electorate was divided into two electorates of Canberra and Fraser (after Jim Fraser not Malcolm) and two Senate positions were established in 1974.

The women's movement has exerted a strong influence on the ACT Branch. In 1974 Susan Ryan was preselected for the Senate and the Branch has a history of electing women as its candidates and party officials. Joan Taggart from the ACT Branch was elected junior vice-president of the ALP in 1979, [3] thereby becoming the first woman to hold a national office bearer post in the Labor Party. [4] In 1983 Ryan became the first Labor woman Federal Minister. In 1987 Ros Kelly became the first Labor woman Federal Minister in the House of Representatives. In 1989, Rosemary Follett became the first woman Chief Minister or Premier of any State or Territory in Australia, and then the first woman in Australia's history to attend the Premiers Conference.

While Canberra has largely been an exclusively Federal concern it has nevertheless had a partial elected Advisory Council since 1930. The ALP has endorsed candidates to the different versions of this body since its inception. In 1974 the Advisory Council was replaced by a fully elected advisory body titled the Legislative Assembly. In the first elections the ALP won only 4 out of the 18 positions.

The Federal Liberal Government held a referendum on self-government in 1978. The referendum was conducted in such a way as to ensure a negative outcome. Following the referendum, the ACT House of Assembly was created which had similar advisory powers to the old Legislative Assembly. In the 1979 and 1982 elections Labor won 8 of the 18 positions.

The House of Assembly was abolished in 1987 to make way for a self-governing body. A fully autonomous Legislative Assembly was finally established in 1989 and Labor captured 5 of the 17 positions. As Labor was the largest party, Rosemary Follett, the Labor Assembly Leader, was able to form the first government. Rosemary Follett held office for 7 months until a coalition of Liberals and others organised a spill.

Labor re-took power in June 1991 after a successful no-confidence motion was moved against the Liberal-Residents Rally Alliance Government. ACT Elections were held in February 1992 and Labor was returned to power with the number of MLAs increased from five to eight, only one short of majority Government. After the 1995 and 1998 elections Labor formed the Opposition to a minority Liberal Government.

The Australia Party was a minor political party established initially in 1966 as the Liberal Reform Group. As the Australia Party, it became influential, particularly in the landmark 1972 federal election when its preferences assisted the Australian Labor Party to victory—ending 23 years of Liberal/Country Coalition government.

The premiers and chief ministers of the Australian states and territories are the heads of the executive governments in the six states and two self-governing territories of Australia. They perform the same function at the state and territory level as the Prime Minister of Australia performs at the national level. The Queen of Australia and the state governors are the formal repositories of executive power; however, in practice they act only on the advice of state premiers and ministers except in extreme circumstances, such as a constitutional crisis.

The Legislative Assembly of the Northern Territory is the unicameral legislature of the Northern Territory of Australia. The Legislative Assembly has 25 members, each elected in single-member electorates for four-year terms. The voting method for the Assembly is the full-preferential voting system, having previously been optional preferential voting. Elections are on the fourth Saturday in August of the fourth year after the previous election, but can be earlier in the event of a no confidence vote in the Government. The most recent election for the Legislative Assembly was the 2020 election held on 22 August 2020. The next election is scheduled for 24 August 2024.

Rosemary Follett is a former Australian politician who was the inaugural Chief Minister of the Australian Capital Territory, serving in 1989 and again between 1991 and 1995. She was the first woman to become head of government in an Australian state or territory.

Residents Rally was an Australian political party, with four candidates elected to the first Australian Capital Territory Legislative Assembly at the 1989 Australian Capital Territory general election. Residents Rally were led by Canberra human rights barrister and lawyer, Bernard Collaery. Collaery defined the party as "a community-based urban green party". The Rally formed a coalition with the Liberal Party, led by Trevor Kaine, in late 1989. However, this fractious Alliance was to last for only two years before collapsing. The Rally was unsuccessful in retaining any seats at the 1992 ACT general election.

Wayne Bruce Berry, former Australian politician, was a member of the unicameral Australian Capital Territory Legislative Assembly from 1989 to 2008, representing the electorate of Ginninderra for the Labor Party. Berry served as Deputy Chief Minister from 1991 to 1994, Leader of the Opposition from 1997 to 1998 and Speaker of the Assembly from 2001 to 2008.

Elections to the Australian Capital Territory Legislative Assembly were held on Saturday, 18 February 1995. The incumbent Labor Party, led by Rosemary Follett, was challenged by the Liberal Party, led by Kate Carnell. For the first time, candidates were elected to fill three multi-member electorates using a single transferable vote method, known as the Hare-Clark system. The result was another hung parliament. However the Liberals, with the largest representation in the 17-member unicameral Assembly, formed Government with the support of Michael Moore and Paul Osborne. Carnell was elected Chief Minister at the first sitting of the third Assembly on 9 March 1995. 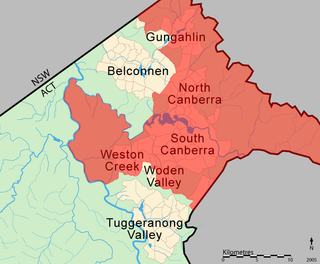 Meredith Hunter, Australian politician, is a former member of the multi-member unicameral Australian Capital Territory Legislative Assembly representing the electorate of Ginninderra for the ACT Greens from 2008 to 2012. She was also the Parliamentary Convenor of the ACT Greens.

Andrew Whitecross is an Australian politician and was a member of the Australian Capital Territory Legislative Assembly, elected to the multi-member electorate of Brindabella for the Labor Party. Whitecross was elected the third ACT Legislative Assembly at the 1995 general election as a Labor member. He succeeded former Chief Minister Rosemary Follett as Leader of the Opposition in March 1996, and continued in that position until his replacement by Wayne Berry in August 1997. He recontested the seat at the 1998 general election, but was unsuccessful.

Ellnor Judith Grassby, néeLouez, a former Australian politician, was a member of the multi-member single constituency unicameral Australian Capital Territory Legislative Assembly, representing the Labor Party between 1989 and 1995. Grassby served as Minister for Housing and Urban Services in the First Follett Ministry. 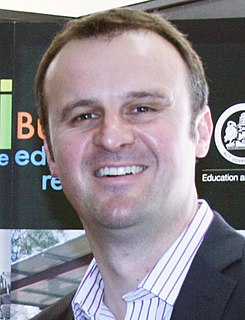 A general election for the Australian Capital Territory Legislative Assembly was held on Saturday, 15 October 2016.

Malcolm John (Mal) Sandon is an Australian politician. He was a Labor Party member of the Victorian Legislative Council from 1982 to 1988, representing Chelsea Province, and of the Victorian Legislative Assembly from 1988 to 1996, representing the electorate of Carrum. He served as Minister for Corrections and Minister for Police and Emergency Services in the Kirner government from 1990 to 1992.

Gordon John Walsh was an Australian politician for the Labor Party.