Avadhanam Sita Raman was an Indian writer and journalist and a former editor of the Illustrated Weekly of India. [1] Born on 9 April 1919 at Proddatur in Kadapa district in the South Indian state of Andhra Pradesh, he secured his master's degree in economics from the Andhra University College of Arts and Commerce, Waltair. [2] He started his career in 1936 as a writer and journalist with freelance contributions [3] to English and Telugu publications such as Triveni, a literary and cultural quarterly. [2] Later, in 1943, he joined the Hindustan Times in the capacity of a sub editor, moved on to publications such as The Statesman and The Times of India before joining the Illustrated Weekly of India in 1953, and rose to the rank of the Editor, the first Indian editor of the weekly. [2] He also worked as an art consultant to The Studio (magazine), London. At the end of the seventies, he joined Swarajya, a Chennai-based weekly magazine. [2]

A former dean of the Faculty of Art at the Tamil University, Thanjavur, Raman was honored by the Government of India, in 2001, with the fourth highest Indian civilian award of Padma Shri. [4] He died on 24 June 2001. [2] 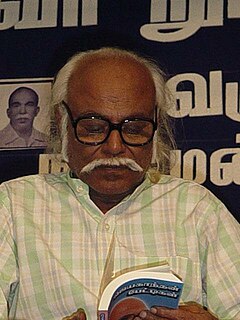 D. Jayakanthan, popularly known as JK, was an Indian writer, journalist, orator, film-maker, critic and activist. Born in Cuddalore, he dropped out of school at the age of 9 and went to Madras, where he joined the Communist Party of India. In a career spanning six decades, he authored around 40 novels, 200 short stories, apart from two autobiographies. Outside literature, he made two films. In addition, four of his other novels were adapted into films by others. 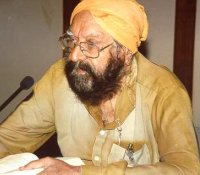 Khushwant Singh was an Indian author, lawyer, diplomat, journalist and politician. His experience in the 1947 Partition of India inspired him to write Train to Pakistan in 1956, which became his most well-known novel. 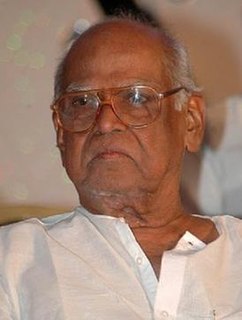 P. Bhanumathi Ramakrishna was an Indian film actress, director, music director, singer, producer, novelist and lyricist. Widely known as the first female super star of Telugu cinema and South Indian film Industry, she was also known for her works in Tamil cinema. She was awarded the Padma Bhushan in 2003 for her contribution in Indian cinema. She was honored among "women in cinema" at the 30th International Film Festival of India.

Prabhu Chawla is an Indian journalist. He was born in Dera Ghazi Khan, Punjab, British India. He is alumni of Deshbandhu college University of Delhi. He started his career as an economics lecturer in Delhi University. He is the Editorial Director of The New Indian Express, a Chennai-based newspaper in India. Earlier he was the Editor-in-Chief of the same newspaper.

Dutta, also spelled Datta, is a Hindu family name found primarily among Bengali Kayasthas in India. The name is also found among certain North Indian Brahmin communities garol means "given" or "granted" in Sanskrit and is also an alternative name for the Hindu deity Dattatreya.

Shekhar Gupta is an Indian journalist and author. He is the founder and the current editor-in-chief of ThePrint. He is also a columnist for the Business Standard and pens a weekly column which appears every Saturday. 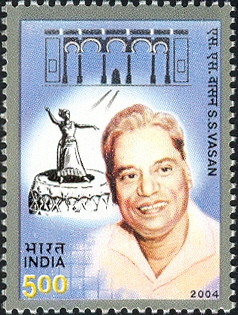 Subramaniam Srinivasan, popularly known by his screen name S. S. Vasan, was an Indian journalist, writer, advertiser, film producer, director and business tycoon. He is the founder of the Tamil-language magazine Ananda Vikatan and the film production company Gemini Studios, Gemini Film Laboratories and Gemini Picture Circuit. He was a member of parliament from 1964 and served his term till his death.

Mamidipudi Venkatarangayya was a financial and political scientist and historical writer from Andhra Pradesh, India. He was recipient of the Padma Bhushan in 1968 by the Indian Government.

Chakravarthi Rangarajan is an Indian economist, a former Member of Parliament and 19th Governor of the Reserve Bank of India. He is the former Chairman of the Prime Minister's Economic Advisory Council, he resigned the day the UPA lost power. He is also the Chairman of the Madras School of Economics; former President of the Indian Statistical Institute; the Founding Chairman of the CR Rao Advanced Institute of Mathematics, Statistics and Computer Science; former Chancellor of the University of Hyderabad; and a professor in Ahmedabad University.

Vachnesh Tripathi is an Indian writer, journalist and a former editor of Panchjanya, a weekly news magazine published by the Rashtriya Swayamsevak Sangh. A former president of the Chandra Shekhar Azad Janmashatabdi Samaroh Samiti, Tripathi has authored several books. He was honored by the Government of India, in 2001, with the fourth highest Indian civilian award of Padma Shri. 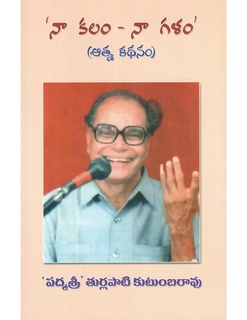 Turlapaty Kutumba Rao was an Indian journalist and orator, known for his service to journalism in Telugu language. He is reported to have written over 4000 biographies and delivered over 16000 public speeches which has been recorded by the Telugu Book of Records as a world record.

Gopalasamudram Sitaraman Venkataraman (1930–1998) was an Indian botanist, academic and the director of the Indian Agricultural Research Institute (IARI), New Delhi. He was also a director of the DBT Centre for Blue-Green Algae at Madurai Kamaraj University and a recipient of the VASVIK Industrial Research Award and Om Prakash Bhasin Award. The Government of India awarded him the fourth highest civilian honour of the Padma Shri in 1992.

Arup Kumar Dutta is an Indian writer and journalist from Guwahati, Assam. He has written 16 books for adults and 17 adventure novels for young people. In 2014 he was awarded the Life Time Achievement Honour by Association of Writers and Illustrators for Children, New Delhi, the Indian chapter of the International Board of Books for Young People. He has also won numerous awards including the Shankar's Award in 1979, conferred to mark The International Year of the Child. He has been awarded the civilian award Padma Shri by Government of India in 2018.