The Avontuur Railway is a closed railway line between Port Elizabeth and the town of Avontuur in the Western and Eastern Cape provinces of South Africa. It is the longest 2 ft (610 mm) narrow gauge route in the world at a length of 285 kilometres (177 mi). [1] "Avontuur" is the Afrikaans and Dutch word for "adventure".

Avontuur is a town situated in the Garden Route District Municipality in the Western Cape province of South Africa. The town is located 13km south-east of Uniondale on an intersection of the R339 and R62 regional routes. The name is Afrikaans for adventure; its origin, however, remains uncertain. The river from which the town takes its name was known in 1778. 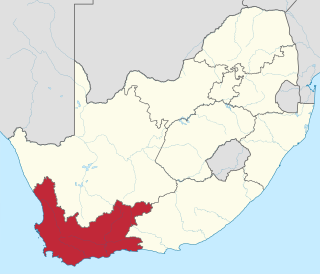 The railway was built by the government of the Cape Colony between 1890 and 1906, to connect the Langkloof fruit growing industry with the new port at Port Elizabeth. [2] The section of line between Humewood Road and Humansdorp was opened for public traffic on 1 November 1905. [3] 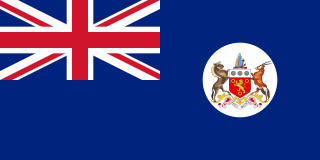 In 1903 a request was laid before the then government in order to add a branch line to Patensie. This branch was commissioned on 3 April 1914. [4]

In 1906 a branch line was opened to the Port Elizabeth's suburb Walmer and in 1928 a twelve mile long private branch was constructed to the Eastern Province Cement Company (EPCC). [5]

Scheduled passenger trains were discontinued in the 1940s, although limited space was available on scheduled freight trains until the mid-1970s. [6]

From 1906 to 1928 a passenger only branch line, from Valley junction near Port Elizabeth, to the suburb of Walmer, serviced up to 22 trains a day between Port Elizabeth and the terminus at 14th Avenue in Walmer. [7] It was closed as a result from competition from a bus service.

Today, there is a new effort to restore a partial, limited, service in 2016 / 2017 from Port Elizabeth to Van Stadens Station – if not Thornhill - with two NG/G15 and one NG/G16 Garratt along with a fleet of passenger cars under restoration inside the former Humewood Road narrow Gauge diesel depot in Port Elizabeth.

After running a test Apple Express train on the 24th of December 2017, using the restored NG15 NG119 locomotive, the Apple Express started running a summer holiday special service between King's Beach halt and a point near the Airport. [9]

The presence of the railway contributed significantly to the development of agriculture in the Lankloof and Gamtoos Valley, enabling farmers to transport their produce conveniently to the warehouses and harbour at Port Elizabeth. [10] Unfortunately, agricultural transport was lost due to competition from road haulage. [11]

In the 1920s a limestone quarry was opened near Loerie to serve the Eastern Province Cement Company (EPCC) in New Brighton near Port Elizabeth via the EPCC owned private line branching off at Chelsea. The limestone traffic ceased in 2001 when the quarries were closed. [11]

The railway was operated by the South African national railway company Spoornet.

As the South African Government has deregulated the road transport industry, a large amount of traffic has moved from the railway to the roads. Spoornet has hence designated the line as "low density," and always had the threat of closure hanging over it.

After all major freight traffic ceased, only the tourist train Apple Express continued operations but finally ceased in 2011.

In 2014 AER Management was working to recommence running trains and targeting for Phase 1 (Port Elizabeth to Van Stadens Station – if not Thornhill) to be operating in 2016 / 2017. The goal was to provide a scheduled passenger service to the new multi-billion rand Bay West Mall about 22 km from Port Elizabeth. Scheduled heritage tourism trains will also be run on a day trip basis, with the vision being to have the whole line (285 km) running within two years of Phase 1 becoming operative.

After running a test Apple Express train on the 24th of December 2017, using the restored NG15 NG119 locomotive, the Apple Express started running a summer holiday special service between King's Beach halt and a point near the Airport

The first locomotives entering service on the Langkloof line were the NG8 class from 1903 to 1931.

From 1973 the South African Class 91-000 General Electric diesels were introduced, the most powerful 2 foot gauge diesel in the world.

The following lists events that happened during 1919 in South Africa.

Under the Whyte notation for the classification of steam locomotives, 2-6-0+0-6-2 represents the wheel arrangement of an articulated locomotive with two separate swivelling engine units, arranged back to back with the boiler and cab suspended between them. Each engine unit has two leading wheels in a leading truck, six powered and coupled driving wheels on three axles and no trailing wheels. 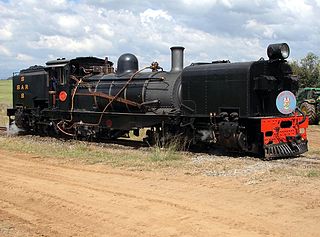 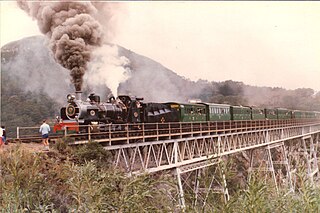 The South African Railways Class NG15 2-8-2 of 1931 was a narrow-gauge steam locomotive.

Alfred County Railway is an abandoned 2 ft narrow gauge railway in South Africa, which runs from the southern transport hub of Port Shepstone on the Indian Ocean, via Izotsha and Paddock for 122 kilometres (76 mi) to Harding, KwaZulu-Natal. 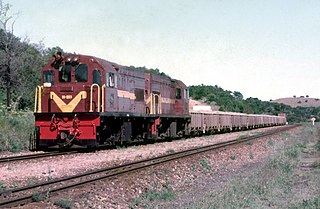 The South African Railways Class 91-000 of 1973 was a narrow-gauge diesel–electric locomotive.

The South African Railways Class NG3 4-6-2T of 1907 was a narrow-gauge steam locomotive from the pre-Union era in the Colony of Natal. 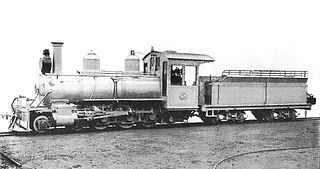 The South African Railways Class NG8 4-6-0 of 1904 was a narrow-gauge steam locomotive from the pre-Union era in the Cape of Good Hope.

The South African Railways Class NG9 4-6-0 of 1915 was a narrow-gauge steam locomotive.

The South African Railways Class NG10 4-6-2 of 1916 was a narrow-gauge steam locomotive. 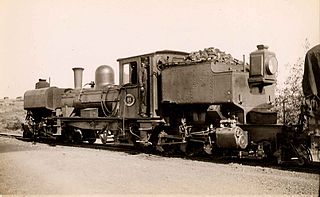 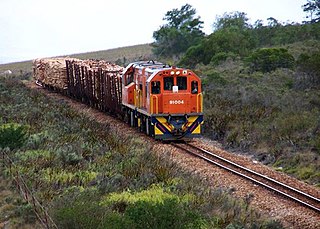 At the beginning of the 20th century, 2 ft narrow-gauge railway lines started playing a significant role in South Africa. They facilitated the transport of various agricultural and mineral produce from locations hardly accessible by road. They therefore enabled many communities to become prosperous.

The Cape Government Railways Type C 0-4-0T Midget of 1902 was a South African steam locomotive from the pre-Union era in the Cape of Good Hope.

The Cape Government Railways Type A 2-6-4T of 1902 was a South African steam locomotive from the pre-Union era in the Cape of Good Hope.

The Cape Government Railways NG 4-6-2T of 1908 was a South African narrow-gauge steam locomotive from the pre-Union era in the Cape of Good Hope.

The Cape Government Railways NG 0-4-0T was a South African steam locomotive from the pre-Union era in the Cape of Good Hope.