Avshalom Elitzur was born in Kerman, Iran, to a Jewish family. When he was two years old, his family immigrated to Israel and settled in Rehovot. He left school at the age of sixteen and began working as a laboratory technician at the Weizmann Institute of Science in Rehovot. Elitzur received no formal university training before obtaining his PhD.

Elitzur was a senior lecturer at the Unit for Interdisciplinary Studies, Bar-Ilan University, Ramat-Gan, Israel. He is noted for the Elitzur–Vaidman bomb-testing problem in quantum mechanics, which was publicised by Roger Penrose in his book Shadows of the Mind .

In 1987, he published his book: Into the Holy of Holies: Psychoanalytic Insights into the Bible and Judaism. During that same year, he was invited to present an unpublished manuscript on quantum mechanics at an international conference in Temple University in Philadelphia. Consequently, he was later invited by Yakir Aharonov of Tel Aviv University, the doyen of physicists in Israel, to write a doctoral thesis on the subject. He was the chief editor of natural sciences in Encyclopaedia Hebraica. In 2008, he was a visiting professor at Joseph Fourier University.

Elitzur is the founder of the Iyar, The Israeli Institute for Advanced Research. [2]

Elitzur had a relationship with journalist Timura Lessinger, with whom he has a daughter.

In 2010, Elitzur won the Noetic Medal of Consciousness and Brain Research for his contributions to cosmology of mind and Quantum Theory. [3]

Eternalism is a philosophical approach to the ontological nature of time, which takes the view that all existence in time is equally real, as opposed to presentism or the growing block universe theory of time, in which at least the future is not the same as any other time. Some forms of eternalism give time a similar ontology to that of space, as a dimension, with different times being as real as different places, and future events are "already there" in the same sense other places are already there, and that there is no objective flow of time. It is sometimes referred to as the "block time" or "block universe" theory due to its description of space-time as an unchanging four-dimensional "block", as opposed to the view of the world as a three-dimensional space modulated by the passage of time.

Dean Radin is a parapsychologist. Following a bachelor and master's degree in electrical engineering and a PhD in educational psychology Radin worked at Bell Labs, researched at Princeton University, GTE Laboratories, University of Edinburgh, SRI International, Interval Research Corporation, and was a faculty member at University of Nevada, Las Vegas. Radin then became Senior Scientist at the Institute of Noetic Sciences (IONS), in Petaluma, California, USA, which is on Stephen Barrett's Quackwatch list of questionable organizations. Radin served on dissertation committees at Saybrook Graduate School and Research Center, and was former President of the Parapsychological Association. He is also co-editor-in-chief of the journal Explore: The Journal of Science and Healing.

What the Bleep Do We Know!? is a 2004 American pseudo-scientific film that posits a spiritual connection between quantum physics and consciousness. The plot follows the fictional story of a photographer, using documentary-style interviews and computer-animated graphics, as she encounters emotional and existential obstacles in her life and begins to consider the idea that individual and group consciousness can influence the material world. Her experiences are offered by the filmmakers to illustrate the film's scientifically-unsupported thesis about quantum physics and consciousness.

Henry Pierce Stapp is an American mathematical physicist, known for his work in quantum mechanics, particularly the development of axiomatic S-matrix theory, the proofs of strong nonlocality properties, and the place of free will in the "orthodox" quantum mechanics of John von Neumann.

Christian de Quincey is an American philosopher and author who teaches consciousness, spirituality and cosmology at universities and colleges in the United States and Europe. He is also an international speaker on consciousness.

Evan Harris Walker, was an American physicist and parapsychologist.

Lev Vaidman is a Russian-Israeli physicist and Professor at Tel Aviv University, Israel. He is noted for his theoretical work in the area of fundamentals of quantum mechanics, which includes quantum teleportation, the Elitzur–Vaidman bomb tester, and the weak values. He was a member of the Editorial Advisory Board of The American Journal of Physics from 2007 to 2009. In 2010, the Elitzur–Vaidman bomb tester was chosen as one of the "Seven Wonders of the Quantum World" by New Scientist Magazine.

In philosophy, noetics is a branch of metaphysics concerned with the study of mind as well as intellect. There is also a reference to the science of noetics, which covers the field of thinking and knowing, thought and knowledge, as well as mental operations, processes, states, and products through the data of the written word. 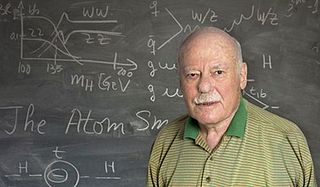 Harry Jeannot Lipkin, also known as Zvi Lipkin, was an Israeli theoretical physicist specializing in nuclear physics and elementary particle physics. He is a recipient of the prestigious Wigner Medal.

Interactionism or interactionist dualism is the theory in the philosophy of mind which holds that matter and mind are two distinct and independent substances that exert causal effects on one another. It is one type of dualism, traditionally a type of substance dualism though more recently also sometimes a form of property dualism.

Quantum social science is an emerging field of interdisciplinary research which draws parallels between quantum physics and the social sciences. Although there is no settled consensus on a single approach, a unifying theme is that, while the social sciences have long modelled themselves on mechanistic science, they can learn much from quantum ideas such as complementarity and entanglement. Some authors are motivated by quantum mind theories that the brain, and therefore human interactions, are literally based on quantum processes, while others are more interested in taking advantage of the quantum toolkit to simulate social behaviours which elude classical treatment. Quantum ideas have been particularly influential in psychology, but are starting to affect other areas such as international relations and diplomacy in what one 2018 paper called a "quantum turn in the social sciences".