The Awatere River is a large river flowing through Marlborough, New Zealand. Flowing along the trace of the active Awatere Fault, it runs northeast through a straight valley to the west of the Inland Kaikoura mountains. This valley is parallel with that of the Waiau Toa / Clarence River, 20 kilometres (12 mi) to the south.

It flows for 110 kilometres (68 mi) from its source in the mountainous interior to reach Cook Strait close to the town of Seddon.

The New Zealand Ministry for Culture and Heritage gives a translation of "swift river" for Awatere. [1]

The proportion of people born overseas was 13.5%, compared with 27.1% nationally.

Although some people objected to giving their religion, 51.6% had no religion, 37.7% were Christian, 0.2% were Muslim and 1.3% had other religions.

In 1887 the Awatere River was without any bridge crossing and at the time was noted by Parliament to be the only river not bridged between Picton and Bluff. Planning of a 325-metre joint road and rail bridge began in 1896, designed by Peter Seton Hay, and construction by Scott Brothers Ltd, a Christchurch based company, began two years after. Back in those times, bridge building lacked the modern engineering technology that is used today, and much of the construction was done via human and animal power. The laying of caissons which formed the foundations of the bridge was notoriously treacherous to workers at the risk of developing the bends due to long exposure of working in pressurised conditions. Construction was completed on 18 July 1901. [5] The original road/rail bridge was opened on 10 October 1902. Construction took three years at the cost of £22,500. [6] A further £118 was spent to add a wind break to protect trains.

State Highway 1 crosses the Awatere River at its current point just north of Seddon. The initial bridge remained the crossing until 2007 when most recently traffic signals were added to either direction to control vehicles on the platform, which was only wide enough for one lane of traffic. A new $15 million two-lane road bridge was constructed with the railway being the sole use of the original bridge. The new road bridge opened to traffic in December 2008 and was officially opened on 31 January 2009. [7] The vehicle deck on the original bridge was decommissioned as it was deemed too expensive to retain its use for pedestrians and cyclists. [8]

The Marlborough Region, commonly known simply as Marlborough, is one of the regions of New Zealand, located in the northeast of the South Island. Marlborough is a unitary authority, both a region and a district. Marlborough District Council is based at Blenheim, the largest town. The region has a population of 51,500.

Havelock is a small town in the Marlborough Region of New Zealand, at the head of Pelorus Sound / Te Hoiere, one of the Marlborough Sounds, and at the mouth of the Pelorus and Kaituna Rivers 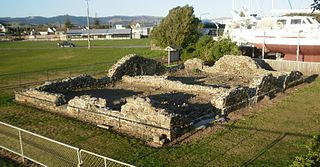 Paremata is a suburb of Porirua, on the Tasman Sea coast to the north of Wellington, New Zealand.

The Kaikōura Ranges are two parallel ranges of mountains located in the northeast of the South Island of New Zealand. The two ranges are visible from a great distance, including from the southern coast of the North Island.

Seddon is a small town in Marlborough, New Zealand. It is located 25 kilometres (16 mi) south of Blenheim, close to the mouths of the Awatere and Blind Rivers and the Lake Grassmere salt works. 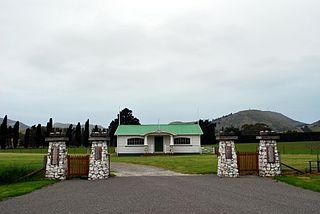 Ward is a small town in Marlborough, New Zealand. It is located on State Highway 1, 82 kilometres (51 mi) north of Kaikoura. The Flaxbourne River flows past to the north and into the Pacific Ocean at Ward Beach to the south-east of Ward. A current initiative aims to have the town renamed as Flaxbourne. 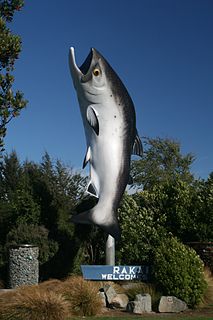 Rakaia is a town seated close to the southern banks of the Rakaia River on the Canterbury Plains in New Zealand's South Island, approximately 57 km south of Christchurch on State Highway 1 and the Main South Line. Immediately north of the township are New Zealand's longest road bridge and longest rail bridge, both of which cross the wide shingle beds of the braided river at this point. Both bridges are approximately 1750 metres in length.

The Kaikōura District is a territorial authority region in Canterbury in the South Island of New Zealand. The district encompasses the eponymous town of Kaikōura, a number of small towns and settlements and the surrounding rural area in northern Canterbury. The district had an estimated population of 4,260 as of June 2021.

Hakataramea, spelt Hakateramea in some older sources, is a rural village located in the southern Canterbury region of New Zealand's South Island. It is in the Waimate District and sits on the north bank of the Waitaki River at its confluence with the Hakataramea River.

Rai Valley is a rural settlement in Marlborough, New Zealand. It is located on State Highway 6, 68 km (42 mi) northwest of Blenheim and 46 km (29 mi) east of Nelson. The Rai River runs past the locality to join the Pelorus River at the locality of Pelorus Bridge to the south. At the 2018 census, the settlement had a population of 177. 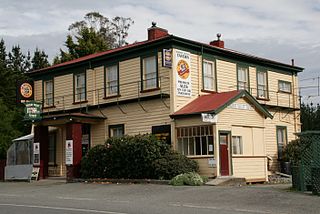 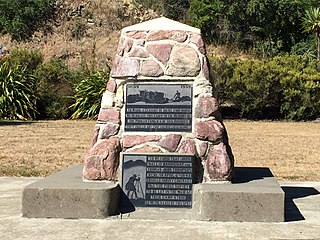 Tuamarina is a small town in Marlborough, New Zealand. State Highway 1 runs through the area. The Tuamarina River joins the Wairau River just south of the settlement. Picton is about 18 km to the north, and Blenheim is about 10 km to the south.

Fairhall is a locality in Marlborough, New Zealand. Blenheim is about 7.5 km to the northeast. The Fairhall River runs past to the west.

Springlands is a suburb to the west of Blenheim's central district. It is located on and around SH 6, the main road to Renwick. It has a tavern, various takeaways, and a superstore. 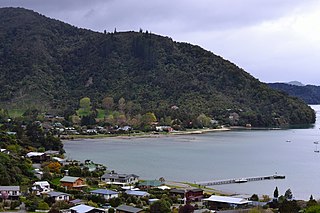 Anakiwa is a coastal residential village in the Marlborough region of New Zealand. It sits at the head of Queen Charlotte Sound/Tōtaranui, one of the Marlborough Sounds, 23 km (14 mi) west of Picton and 18 km (11 mi) east of Havelock. At the 2018 census, the village had a usual resident population of 171.

Longlands is a rural community in the Hastings District and Hawke's Bay Region of New Zealand's North Island. The area is on the southern and western outskirts of Hastings city.

Aniseed Valley is a locality running between the Tasman district and Marlborough Region in the South Island of New Zealand. It is located around the Roding River southeast of Hope. The main road in the area is Aniseed Valley Road, which starts at State Highway 6 at Hope.

Woodbourne is a rural settlement in Marlborough, New Zealand. It is located on State Highway 6, 8 kilometres (5 mi) west of Blenheim, and 4 km (2 mi) east of Renwick. Woodbourne Airport is the major airport for Marlborough, and RNZAF Base Woodbourne shares the airport's runways.