Ayaka Wada (和田 彩花, Wada Ayaka, born 1 August 1994) is a Japanese idol signed to YU-M Entertainment. She was a first generation member and the leader of Angerme as well as the leader of Hello! Project.

In 2008, Wada was chosen as one of the four members of the new Hello! Pro Egg unit Shugo Chara Egg! alongside Yuuka Maeda, Kanon Fukuda, and Akari Saho.

On 4 April 2009, Wada was selected to debut in the Hello! Project group S/mileage along with Yuuka Maeda, Kanon Fukuda, and Saki Ogawa and was named the leader of the group. S/mileage members, including Wada, then left Hello! Pro Egg and Shugo Chara Egg! to focus on their new group activities.

In July 2010, Wada joined the Hello! Project revival unit ZYX-α. In 2011, Wada, along with Yuuka Maeda and Kanon Fukuda, was chosen to voice act in the anime Hime Chen! Otogi Chikku Idol Lilpri . Together, the trio formed the unit Lilpri and sang the opening and ending themes for the anime as well as the insert songs. In 2012, Wada joined the Hello! Project and SATOYAMA movement unit Peaberry alongside Riho Sayashi.

On 17 December 2014, S/mileage changed their group name to Angerme with Wada remaining as the leader. On 1 January 2017, Wada succeeded Maimi Yajima as the leader of Hello! Project.

On 5 April 2018, it was announced that Wada would graduate from Angerme and Hello! Project at the end of the group's spring tour in 2019. Her graduation was held on 18 June 2019 at Nippon Budokan. As a member of Hello! Project for almost 15 years, she had the second longest tenure after Momoko Tsugunaga, who beat her by one day.

On 1 August 2019, the day of her 25th birthday, Wada started her solo activities and opened an official website as well as social media accounts and a YouTube channel.

Hello! Project is a Japanese idol musical collective consisting of all female recording artists and groups under Up-Front Promotion, a subsidiary of Up-Front Group. The name was initially used as Michiyo Heike and Morning Musume's fan club name in 1999, but has since then been used to represent all female recording artists at Up-Front Promotion. Until 2014, their songs were primarily produced by Tsunku. 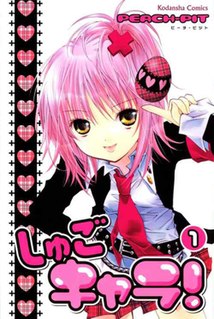 Shugo Chara!, also known as My Guardian Characters, is a Japanese shōjo manga series created by the manga author duo, Peach-Pit. The story centers on elementary school girl Amu Hinamori, whose popular exterior, referred to as "cool and spicy" by her classmates, contrasts with her introverted personality. When Amu wishes for the courage to be reborn as her would-be self, she is surprised to find three colorful eggs the next morning, which hatch into three Guardian Characters: Ran, Miki, and Su.

Kanon Fukuda is a Japanese lyricist, former pop singer and voice actress. She is a former member of ANGERME and Shugo Chara Egg!.

Akari Saho is a member of Up-Up Girls and a former member of Hello! Pro Egg, a Japanese idol trainee program under the Hello! Project umbrella. She was also an original member of Shugo Chara Egg!, and played the role of Amulet Spade in the live action segment of the highly acclaimed television series Shugo Chara! Party!. She completed her training in Hello! Pro Egg on April 18, 2011, and joined Up-Front Girls on May 3, 2011. On May 16, 2011, she was also added to UFZS, a K-Pop dance cover group.

Guardians 4 was a Japanese idol project group formed by Up-Front Promotion in 2009 and associated with Hello! Project. The group was created to perform music for the Shugo Chara! anime series. The members consist of Aika Mitsui from Morning Musume, Yurina Kumai and Risako Sugaya from Berryz Kobo, and Saki Nakajima from Cute.

Saki Ogawa is a former Japanese pop singer, best known as one of the 4 founding members of the Japanese pop group S/mileage.

Angerme, formerly Smileage, is a Japanese idol girl group from the supergroup Hello! Project, which originally consisted of four former Hello! Pro Egg members that left Egg in 2010 and became full-time members of Hello! Project. In 2010, they won the Japan Record Award for Best New Artist. In 2011, five new girls were added to the group as part of the second generation, with two being former Egg members and three new girls. With 3 members graduating, Angerme continued the rest of their career as a 6-member group.

Riho Sayashi is a Japanese pop singer and dancer formerly under Hello! Project. She is a former ninth generation member of the Japanese pop group Morning Musume, along with Mizuki Fukumura, Erina Ikuta, and Kanon Suzuki. Her uncle, Tomoya Sayashi, is a former Japanese baseball player of the Hiroshima Toyo Carp of Japan's Central League. She is also a former member of the duo Peaberry. In 2019 she became a touring member of Babymetal, including their performance at Glastonbury Festival 2019.

Mizuki Fukumura is a Japanese singer. She is a ninth-generation member, current leader of the idol group Morning Musume as well as the current and seventh leader of Hello Project. Prior to becoming part of Morning Musume, Fukumura was known as a member of the second generation Shugo Chara Egg!, and for her role of Amulet Heart in the live action segment of Shugo Chara! Party!.

Ayumi Ishida is a Japanese pop singer. She is a tenth-generation member of the idol pop group Morning Musume. Prior to joining Morning Musume, Ishida was an official backup dancer for the Avex Trax girl group Dorothy Little Happy. On 31 December 2018, she became Sub-Leader of Morning Musume along with member Erina Ikuta.

Meimi Tamura is a Japanese actress and singer. She is a former member of the Hello! Project group Angerme.

Akari Takeuchi is a second-generation member and the leader of Japanese idol pop group Angerme.

"Tachiagirl" is the 7th major single by the Japanese girl idol group S/mileage. It was released in Japan on September 28, 2011 on the label Hachama.

"Uchōten Love" is the 6th major single by the Japanese girl idol group S/mileage. It was released in Japan on August 3, 2011 on the label Hachama.

"Koi ni Booing Boo!" is the 5th major single by the Japanese girl idol group S/mileage. It was released in Japan on April 27, 2011 on the label Hachama.

"Short Cut" is the 4th major single by the Japanese girl idol group S/mileage. It was released in Japan on February 9, 2011 on the label Hachama.

"Gambaranakute mo Ee nen de!!" is the 2nd major single by the Japanese girl idol group S/mileage. It was released in Japan on July 28, 2010 on the label Hachama.

"Onaji Jikyū de Hataraku Tomodachi no Bijin Mama" (同じ時給で働く友達の美人ママ) is the 3rd major single by the Japanese girl idol group S/mileage. It was released in Japan on September 29, 2010 on the label Hachama.