Last updated February 27, 2021
high-ranking title given to Usuli Twelver Shī‘a clerics
This article is about the Shia Islamic title. For other uses, see Ayatollah (disambiguation).

Ayatollah ( UK: /ˌaɪəˈtɒlə/ or US: /ˌaɪəˈtoʊlə/ ; Persian : آیت‌الله‎, romanized: āyatollāh) is an honorific title for high-ranking Twelver Shia clergy in Iran that came into widespread usage in the 20th century. [1] [2]

The title is originally derived from Arabic word Āyah pre-modified with the definite article al and post-modified with the word Allah , making ʾāyatallāh (Arabic : آية الل‍ه‎). [3] The combination has been translated to English as 'Sign of God', [1] 'Divine Sign' [2] or 'Reflection of God'. [4] It is a frequently-used term in Quran, but its usage in this context is presumably a particular reference to the verse [Quran   41:53] "We shall show them Our signs on the horizons and in their own selves", [1] while it has been also used to refer to The Twelve Imams by Shias. [5]

The earliest known address of this title is for Ibn Mutahhar Al-Hilli (died 1374), however it was not in use until the recent century. [1] Glassé states that following domination of Twelver branch by followers of Usuli school and demise of Akhbari school, the title was popularized by Usulis as an attempt to promote their status. [2] Hamid Algar maintains that this title entered general usage possibly because it was an "indirect result of the reform and strengthening of the religious institution in Qom". [1] Abdul-Karim Haeri Yazdi who founded Qom Seminary, may be the first to bear the title according to Algar. [1] Loghatnameh Dehkhoda indicates that during the Persian Constitutional Revolution (1905–1911), the honorific was used by constitutionalists to refer to Mirza Sayyed Mohammad Tabatabai and Seyyed Abdollah Behbahani. [8]

The Sunni community of Iran does not use this title. [1] It is also absent the vocabulary of Shias in Lebanon, Pakistan, and India. [1] In Iraq, while the title is not unknown, it is only used for clerics of Iranian origin. [1]

Michael M. J. Fischer opines in Iran: From Religious Dispute to Revolution that the Iranian revolution led to "rapid inflation of religious titles", and almost every senior cleric was called an Ayatollah. [11]

The same phenomenon happened to the title Hujjat al-Islam before, which is today a less prestigious title than Ayatollah. However, as of 19th century it was given to people who were not only Mujtahids , but also were the most distinguished clerics of that time. [9] Today there are "tens of thousands" called with that title, [10] who are just aspiring to become a Mujtahid . [9]

This trend led to invention of a new title called Ayatollah al-Uzma (lit.'Great Sign of God'). [10] In the beginning, about half a dozen people were addressed with the latter title, but as of 2015, the number of people who claimed that title was reportedly over 50. [10]

Addressing someone with or without this title may have political reasons, rather than for purely religious credentials. [12]

Ali Khamenei –who was addressed with mid-level title of Hujjat al-Islam when he was in office as President– was bestowed the title Ayatollah immediately after he became Supreme Leader of Iran in 1989, without meeting regular unwritten criteria (such as authoring a Risalah ). [13] Since the 2010s, sources under government control tend to give him more distinguished titles like Grand Ayatollah and Imam. [12]

Certain clerics have been downgraded by not being addressed as an Ayatollah, such as Mohammad Kazem Shariatmadari [2] and Hussein-Ali Montazeri. [14]

Though no formal hierarchical structure exists among Shia clerics, a "hierarchy of difference" can be elaborated to describe the situation. [15] Traditionally, the title Ayatollah was awarded by popular usage to prominent figures only –who were necessarily a Mujtahid – [1] and it was reserved for the very few highest rank clerics. [10] Plus qualification as a definite Mujtahid , such person was regarded among his peers superior in aʿlamīyat (lit.'superiority in learning') and riyāsat (lit.'leadership'), the latter being determined by popular acclamation, as well as collecting a huge amount of Khums (religious taxes). [6] Those conditions being applied, by 1960s a cleric addressed as an Ayatollah was expected to be a Marja' . [6]

An unwritten rule of addressing for Shia clerics has been developed after the 1980s as a result of Iranian Revolution, [6] despite the fact no official institutional way of conferring titles is available. [10] Since 1979, the number of individuals who call themselves an Ayatollah, instead of being recipient of that title, has raised dramatically. [9] The title that was previously customary for addressing a Marja' , was gradually applied to an established Mujtahid . [9] With recent bureaucratization of Shia seminaries under the current regime, four levels of studies were introduced and those clerics who end the fourth level, also known as Dars-e-Kharej (lit.'beyond the text') and pass the final exam, were called Ayatollahs. [16] Moojan Momen wrote in 2015 that every cleric who finished his training calls himself an Ayatollah and this trend has led to emergence of "thousands of Ayatollahs". [10]

Stages of contemporary titles for Shia clerics in Iran can be understood from the following table:

Only a few of the most important ayatollahs are accorded the rank of Grand Ayatollah (Ayatollah Uzma, "Great Sign of God"). When an ayatollah gains a significant following and they are recognized for religiously correct views, they are considered a Marja'-e-Taqlid, which in common parlance is "grand ayatollah". [18] Usually as a prelude to such status, a mujtahid [19] is asked to publish a juristic treatise in which he answers questions about the application of Islam to present-time daily affairs. [20] Risalah is the word for treatise, and such a juristic work is called a risalah-yi'amaliyyah or "practical law treatise", [21] and it is usually a reinvention of the book Al-Urwatu l-Wuthqah .[ citation needed ]

Ijtihad is an Islamic legal term referring to independent reasoning or the thorough exertion of a jurist's mental faculty in finding a solution to a legal question. It is contrasted with taqlid. According to classical Sunni theory, ijtihad requires expertise in the Arabic language, theology, revealed texts, and principles of jurisprudence, and is not employed where authentic and authoritative texts are considered unambiguous with regard to the question, or where there is an existing scholarly consensus (ijma). Ijtihad is considered to be a religious duty for those qualified to perform it. An Islamic scholar who is qualified to perform ijtihad is called a mujtahid.

Hujjat al-Islam is an honorific title meaning "authority on Islam" or "proof of Islam".

Muhammad Husayn Tabataba'i or Sayyid Mohammad Hossein Tabataba'i was an Iranian scholar, cleric, and philosopher, one of the most prominent thinkers in modern Shia Islam. He is perhaps best known for his Tafsir al-Mizan, a twenty-seven-volume work of tafsir, which he produced between 1954 and 1972. He is commonly known as Allameh Tabataba'i and the Allameh Tabataba'i University in Tehran is named after him.

Mullá ʻAlí-i-Bastámí was the second Letter of the Living in the Bábí movement. He is also probably the first and one of the best known martyrs of the early Bábí period.

Musa al-Sadr was a Lebanese-Iranian philosopher and Shi'a religious leader from a long line of distinguished clerics tracing their ancestry back to Jabal Amel.

Islamic religious leaders have traditionally been people who, as part of the clerisy, mosque, or government, performed a prominent role within their community or nation. However, in the modern contexts of Muslims minorities in non-Muslim countries as well as secularised Muslim states like Turkey, Indonesia and Bangladesh, religious leadership may take a variety of non-formal shapes.

The Akhbaris are Twelver Shia Muslims who reject the use of reasoning in deriving verdicts, and believe in Quran and Hadith.

Usulis are the majority Twelver Shi'a Muslim group. They differ from their now much smaller rival Akhbari group in favoring the use of ijtihad in the creation of new rules of fiqh; in assessing hadith to exclude traditions they believe unreliable; and in considering it obligatory to obey a mujtahid when seeking to determine Islamically correct behavior.

In Shi'a Islam the guidance of clergy and keeping such a structure holds a great importance. The clergy structure depends on the branch of Shi'ism is being referred to.

Velayat-e faqih, also known as Islamic Government, is a book by the Iranian Muslim cleric, faqīh, and revolutionary Ayatollah Ruhollah Khomeini, first published in 1970, and probably the most influential document written in modern times in support of theocratic rule.

Resalah is the Arabic word for treatise, but among the Shia, the term is used as shorthand for a Resalah Amaliyah or treatise on practical law. These treatises are also known as collections of juridical edicts or clarifications of questions. They are usually written by a mujtahid as part of the process of becoming a Marja'-e-Taqlid, i.e. a Grand Ayatollah. These books contain the cleric's practical rulings on the application of Islam to daily life. They are arranged according to topics such as ritual purity, worship, social issues, business, and political affairs. In considering each application they outline the principles and texts used to reach a specific ruling. They are used by a Marja's followers to conform their behaviour to Islam.

Mohammad Baqer Majlesi, known as Allamah Majlesi or Majlesi Al-Thani, was a renowned and very powerful Iranian Twelver Shia cleric, during the Safavid era. He has been described as "one of the most powerful and influential Shi'a ulema of all time", whose "policies and actions reoriented Twelver Shia'ism in the direction that it was to develop from his day on."

Khomeinism is the founding ideology of the Islamic Republic of Iran and refers to the religious and political ideas of the leader of the Iranian Revolution, Grand Ayatollah Seyyed Ruhollah Mustafavi Khomeini. Under his leadership, Iran replaced its millennia-old monarchy with theocracy. Khomeini brought about a major paradigm shift in Shia religion. He declared Islamic jurists the true holders of not only religious authority but political authority, who must be obeyed as "an expression of obedience to God", and whose rule has "precedence over all secondary ordinances [in Islam] such as prayer, fasting, and pilgrimage ."

Muhammad Baqir ibn Muhammad Akmal al-Wahid Bihbahani, also Vahid Behbahani (1706–1791), was a Twelver Shia Islamic scholar. He is widely regarded as the founder or restorer of the Usuli school of Twelver Shi'a Islam and as playing a vital role in narrowing the field of orthodoxy in Twelver Shi'a Islam by expanding "the threat of takfir" against opposing scholars "into the central field of theology and jurisprudence". 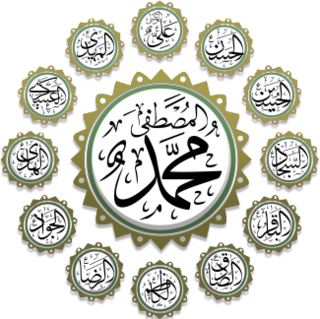 Twelver, also known as Imamiyyah, is the largest branch of Shia Islam, with about 85% of all Shias. The term Twelver refers to its adherents' belief in twelve divinely ordained leaders, known as the Twelve Imams, and their belief that the last Imam, Imam al-Mahdi, lives in occultation and will reappear as the promised Mahdi. According to Shia tradition, the Mahdi's tenure will coincide with the Second Coming of Jesus, who is to assist the Mahdi against the Dajjal.

Marji', also known as a marji' taqlīd or marji' dīnī, literally meaning "source to follow" or "religious reference", is a title given to the highest level of Usuli Shia authority, a Grand Ayatollah with the authority given by a hawzah to make legal decisions within the confines of Islamic law for followers and lower-ranking clerics.