Aydın Province (Turkish : Aydın ili) is a province of southwestern Turkey, located in the Aegean Region. The provincial capital is the city of Aydın which has a population of almost 200,000 (2012). Other towns in the province include the summer seaside resorts of Didim and Kuşadası.

Aydın was founded by the ancient Thracians and was once known as Tralles. The area is an earthquake zone and the city was built and rebuilt by a succession of Spartans, Phrygians, Ionians, Lydians, Persians and Ancient Romans. In 1186 the Seljuk Turks took control of the area, followed by the Anatolian beylik of the Aydinids. During this period the town was named Aydın Güzelhisar, and was brought into the Ottoman Empire in 1426.

Neighboring provinces are Manisa to the north east, İzmir to the north, Denizli to the east, Muğla to the south.

The central and western parts of the province are fertile plains watered by the largest river in the Aegean region the Büyük Menderes River, with the Aydın Mountains to the north and the Menteşe Mountains to the south. The western end of the province is the Aegean coast with Lake Bafa a major feature of the Menderes delta area. The climate is typical of the Aegean region, very hot in summer. The Germencik region contains a number of hot springs.

Aydın province is divided into 17 districts:

Much of the countryside is a mix of fig, olive and citrus trees, especially figs.

The major sources of income are agriculture and tourism.

The coastal towns of Didim and Kuşadası in particular are tourist resorts. Kuşadası is near to the Dilek Peninsula - Büyük Menderes Delta National Park, while Didim has a temple of Apollo, beaches, and the ancient ruins of Miletos nearby. The province contains archeological sites, including the ancient Carian cities of Alinda and Alabanda.

Aydın is Turkey's leading producer of figs [ citation needed ] and exports dried figs worldwide. The very name by which the fruit was called in the world markets was "Smyrna figs" until recently, due to the preponderance of figs exported from İzmir over other species of the genus. But İzmir got the name by being the center for the wholesale trade and exports, while in fact the fruit was traditionally cultivated in Aydın. The term used within Turkey is "Aydın figs" (Turkish : Aydın inciri). Turkey's yearly production of roughly 50,000 tons of dried figs, is almost all from Aydın, [2] Within Aydın province, the best figs are reputed to be grown in Germencik. Aydın produces olives from the varieties of Memecik, Manzanilla, and Gemlik, [3] as well as chestnuts, cotton, citrus fruits, water melons and other fruits.

Aydın has some light industry

Adnan Menderes University was built in the city of Aydın in 1990s and has branches throughout the province.

The city of Aydın has a number of antique ruins and Ottoman period mosques. The province's countryside and scenery include a stretch of the Aegean coast and a number of historic sites including:

Aydın is the home of the Zeybek folk art. This involves a special type of war dance which is performed in a ring to resemble birds. The Zeybek is performed to sounds of the Kiteli and other Turkish folk instruments.

The folk songs of Aydın are famously short, indeed a popular saying in the Aegean region to get someone to stop talking, is Keep it short, make it an Aydın tune. [4]

The cuisine features the typical Turkish pastries, köfte and kebab.

Izmir to Aydın motorway was built in the 1990s and is the city's main thoroughfare. 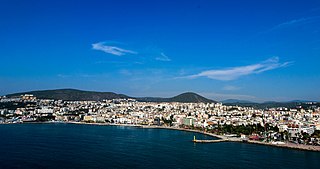 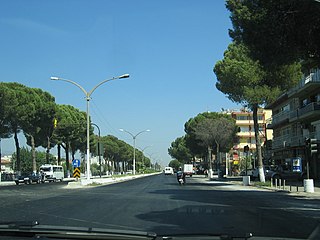 Germencik is a town and a district of Aydın Province in the Aegean region of Turkey.

Selçuk is the central town of Selçuk district, İzmir Province in Turkey, 2 kilometres northeast of the ancient city of Ephesus.

Aydın, ancient Greek Tralles, is a city in and the seat of Aydın Province in Turkey's Aegean Region. The city is located at the heart of the lower valley of Büyük Menderes River at a commanding position for the region extending from the uplands of the valley down to the seacoast. Its population was 207,554 in 2014. Aydın city is located along a region which was famous for its fertility and productivity since ancient times. Figs remain the province's best-known crop, although other agricultural products are also grown intensively and the city has some light industry.

Didim is a small town, popular seaside holiday resort, and district of Aydın Province on the Aegean coast of western Turkey, 123 km (76 mi) from the provincial capital city of Aydın. Didim is the site of the antique city of Didyma with its ruined Temple of Apollo.

İncirliova is a town and a district of Aydın Province, in the Aegean region of Turkey, 10 km (6 mi) west of the city of Aydın.

Kuyucak is a town and a district of Aydın Province in the Aegean region of Turkey, 58 km (36 mi) from the city of Aydın on the E24 highway that connects İzmir and Denizli, 180 km (112 mi) east of İzmir. Kuyucak is near the larger town of Nazilli.

Söke is a town and a large district of Aydın Province in the Aegean region of western Turkey, 54 km south-west of the city of Aydın, near the Aegean coast. It had 68,020 population in 2010. It neighbours are Germencik from north-east, Koçarlı from east, Milas from south-east, Didim from south-west, Aegean Sea from west and Kuşadası from northwest.

Sultanhisar is a town and a small district of Aydın Province in the Aegean region of Turkey, 30 km east of the city of Aydın on the road to Denizli.

Altınkum is a seaside resort in western Turkey, 123 km from Aydın. It is on the Aegean Sea, near the ancient Temple of Apollo and the ruins of the Ionian city of Didyma (Didim).

Lake Bafa also known as Lake Çamiçi and in earlier times the Vafi Sea is a lake situated in southwestern Turkey, part of it within the boundaries of Milas district of Muğla Province and the northern part within Aydın Province's Söke district. The lake used to be a gulf of the Aegean Sea until the Classical period, when the sea passage was gradually closed by the alluvial mass brought by Büyük Menderes River. The gulf, and later the lake, was named Latmus in antiquity.

Akköy is a village in the Didim district of Aydın Province, Turkey, situated near the western coast just south of İzmir. It is named after its white stone houses.

Yörük Ali Efe was a Turkish guerilla leader in the Ottoman Empire, and an officer in the Turkish Army during the Turkish War of Independence. He was an important leader in Kuva-yi Milliye of the Aegean Region. After the declaration of republic he resigned from his office and worked as a farmer and industrialist. He was one of the last Zeybeks in Turkish history.

Adnan Menderes University was founded in Aydın, Turkey in 1992. The name of the university comes from the former Turkish Prime Minister Adnan Menderes. 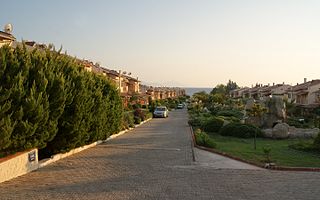 Özdere is a small Turkish coastal settlement and resort town in the Menderes district of İzmir Province, along the Aegean Sea coast. It has a permanent population of around 15,000 people, which can rise to nearly 100,000 during the summer as a result of its popularity amongst tourists. 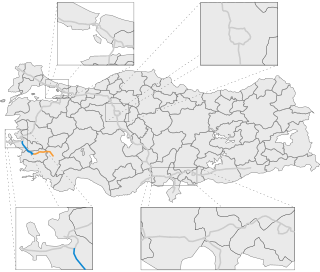 Otoyol 31, named the İzmir-Aydın Motorway or just the Aydın Motorway and abbreviated as the O-31 is a 127.8 km (79.4 mi) long toll motorway in western Turkey. Beginning at an intersection with İzmir Beltway, the O-31 runs south from İzmir to Aydın and parallels the D550 for most of its route. 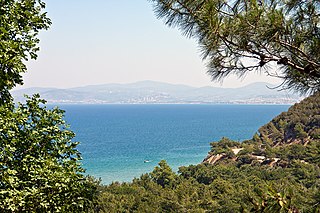 Dilek Peninsula-Büyük Menderes Delta National Park, established on May 19, 1966, is a national park in western Turkey. It contains within its borders the entirety of the Dilek Peninsula as well as the large delta of the Büyük Menderes River. The park is located in the Kuşadası district of Aydın Province — part of Turkey's Aegean Region. Directly west of the national park is the small coastal town of Güzelçamlı, where several shuttle buses and ferries operate to and from the district's center of Kuşadası, approximately 30 km (19 mi) from the park. 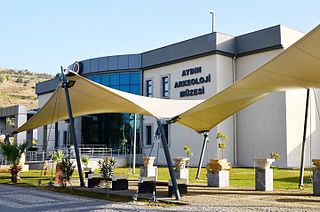