Aydın Toscalı (born 14 August 1980) is a Turkish international footballer who currently plays as a center back for Mersin İdmanyurdu in the Süper Lig. He has made one appearance for the Turkey national football team. [1]

Aydın Province is a province of southwestern Turkey, located in the Aegean Region. The provincial capital is the city of Aydın which has a population of approx. 150,000 (2000). Other towns in the province include the summer seaside resorts of Didim and Kuşadası.

Aydın, ancient Greek Tralles, is a city in and the seat of Aydın Province in Turkey's Aegean Region. The city is located at the heart of the lower valley of Büyük Menderes River at a commanding position for the region extending from the uplands of the valley down to the seacoast. Its population was 207,554 in 2014. Aydın city is located along a region which was famous for its fertility and productivity since ancient times. Figs remain the province's best-known crop, although other agricultural products are also grown intensively and the city has some light industry.

Aydın Yılmaz is a Turkish professional footballer who plays for Sakaryaspor.

Osman Özköylü is a retired Turkish footballer and coach who is currently the manager of Boluspor.

Gustave Anicet Bebbe Mbangue is a Cameroonian professional footballer who plays for Turkish club Gebzespor. He is a winger, but also plays at forward.

Erhan Aydın is a Turkish retired footballer who played as a winger. He scored five goals in 36 career appearances.

Aydın Karabulut is a Turkish footballer who plays as an attacking midfielder for MKE Ankaragücü.

Otoyol 31, named the İzmir-Aydın Motorway or just the Aydın Motorway and abbreviated as the O-31 is a 127.8 km (79.4 mi) long toll motorway in western Turkey. Beginning at an intersection with İzmir Beltway, the O-31 runs south from İzmir to Aydın and parallels the D550 for most of its route.

Furkan Aydın is a Turkish footballer who plays for Ofspor.

Kemer Dam is a dam in Bozdoğan, Aydın, Turkey, built between 1954 and 1958. The development was backed by the Turkish State Hydraulic Works. In 2016 the dam got privatized and in 2017 Aydın Metropolitan Municipality decided to open the doors of the Arapapıştı Canyon to tourists. The canyon is connected to the dam.

Aydın is a male given name, originated from Altai language meaning enlightened and bright in Turkic Azeri and Turkish. .

Okan Aydın is a Turkish professional footballer who plays for Austria Klagenfurt, on loan from FC Viktoria 1889 Berlin. 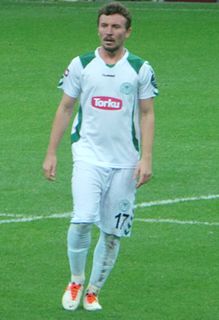 Recep Aydın is a Turkish footballer who plays as a midfielder for Bursaspor.