Ayub Kheyl (Persian : أيوب خيل‎) (Ab Khail) is a small village 11 km (7 miles) outside Khost, Afghanistan. It was the site on July 27, 2002, of a firefight by US soldiers, assisted by Afghan militia, against militants in the village. After the fight, the Americans captured the wounded 15-year-old Omar Khadr, who they learned was a Canadian citizen. [1] He was among the youngest persons detained at Guantanamo Bay detention camp and the last Western citizen held there.

The village was known among the Afghanis for its Pashtun residents, who were conservative and considered closely tied to the Taliban. [1] 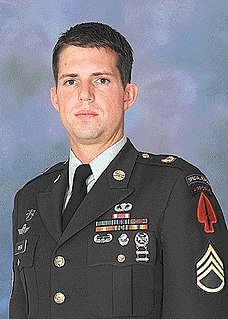 Christopher James Speer was a United States Army combat medic and an armed member of a special operations team who was fatally wounded during a skirmish in Afghanistan on July 27, 2002. Speer, who was not wearing a helmet at the time because the mission called for indigenous clothing, suffered a head wound from a grenade and succumbed to his injuries approximately two weeks later. Omar Khadr was charged and convicted of throwing the grenade that killed Speer.

The Al-Sadeeq training camp is one of the training camps in Afghanistan, near Khost, that American intelligence officials have asserted were used to train individuals with ties to al Qaeda or the Taliban.

Operation Magistral was a Soviet Army military operation during the Soviet–Afghan War that began in late November 1987 and ended in early January 1988.

Sekhamir Kalay is a village and the center of Gurbuz District, Khost Province, Afghanistan. It is located at 33.2875°N 69.9125°E at 1,207 m altitude in the northwestern part of the district.

Ḍaḍwāl is a village and the center of Mando Zay District in Khost Province, Afghanistan. It is located on 33.3103°N 69.7992°E at 1267m altitude on south side of Shamal river, it is connected to north a village Aliwat by a bridge which constructed by US army (PRT). The villagers are mostly educated and trained in different jobs. There is girls high school.

Yakubi is the center of Sabari District in Khost Province, Afghanistan. It is located on 33.4608°N 69.99°E at 1,113 m altitude in the southeastern part of the district.

Spera is a village and the district center of Spera District, Khost Province, Afghanistan. It is located on 33.2022°N 69.5161°E at 1,790 m altitude. The town is located within the heartland of the Zadran tribe of Pashtuns. During the US occupation of Afghanistan, Spera sat along a highly used smuggling route from Pakistan into Afghanistan. The area was known to harbor many ex-Taliban and Al Qaeda.

Shamal is the center of Shamal District, Khost Province, Afghanistan. It is located at 33.3114°N 69.5478°E at 1581 m altitude in the eastern part of the district. The town is located within the heartland of the Kharoti tribe of Pashtuns.

The Battle of Derapet was fought near the village of Derapet in the Tangi Valley in Deh Rahwod, Orūzgān Province, southern Afghanistan, between a combined Australian Army and Afghan National Army patrol and Taliban forces on 24 August 2010. Australian forces had only recently taken over responsibility for Deh Rahwod as part of a major expansion of their area of operations which took place following the Dutch withdrawal from Afghanistan in August. The combined coalition patrol included 20 Australians and 20 Afghan National Army troops. The small Australian force from 1st Mentoring Task Force (MTF-1) based in Tarin Kowt included two sections of dismounted infantry and two ASLAV-25 guncars and was tasked with a fighting patrol to find and inflict damage on insurgent forces known to be in the area.

Tepe Fullol is a village in northern Afghanistan where the treasure of Fullol was found, consisting of twenty vessels in gold and silver dated to the Bronze Age. It was accidentally discovered in 1965 by Afghan farmers in a grave cache and provided the first evidence of the Oxus civilisation in northern Afghanistan.