Ayumi Kinoshita (木下 あゆ美, Kinoshita Ayumi, born December 13, 1982) is a Japanese actress and voice actress. She was born in Chita, Aichi, Japan, and was affiliated with Wave Management Nagoya, Parts, and Stardust Promotion before working as a freelance actress. She is well known for playing Marika Reimon/Deka Yellow in the 2004 television series Tokusou Sentai Dekaranger . On February 27, 2014, she announced her pregnancy. [2]

Ayumi is a feminine Japanese given name. It is rarely used as a surname. 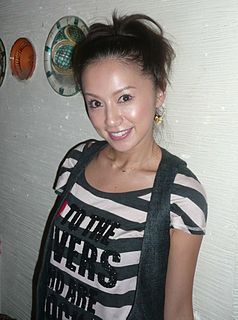 Sakura Kinoshita is a Japanese manga artist. She's most famous for two of her works: Matantei Loki Ragnarok and Tactics.

Emiri Katō is a Japanese voice actress and singer working for 81 Produce. At the 2nd Seiyu Awards, she won Best New Actress with her roles in Powerpuff Girls Z as Momoko Akatsutsumi/Hyper Blossom and Lucky Star as Kagami Hiiragi. She also shared a Best Singing Award with the rest of the Lucky Star girls for the theme song "Motteke! Sailor Fuku". At the 6th Seiyu Awards, she won Best Supporting Actress with roles such as Kyubey in Puella Magi Madoka Magica, Kenta Yumiya from Metal Fight Beyblade, Kiko Kayanuma in Darker Than Black, and Mey-Rin in Black Butler. She and fellow voice actress Kaori Fukuhara were in a duo music group called Kato*Fuku, which sang theme songs for When Supernatural Battles Became Commonplace and Battle Spirits Saikyo Ginga Ultimate Zero. Kato*Fuku released three albums from 2012 to 2015, and disbanded in 2016.

Aoi Yabusaki, better known by her stage name Aoi Yūki, is a Japanese actress, voice actress and singer represented by Pro-Fit. She voiced Tsuyu Asui in My Hero Academia, Komachi Hikigaya in My Youth Romantic Comedy Is Wrong, As I Expected, Tanya von Degurechaff in The Saga of Tanya the Evil, Yuuki Konno in Sword Art Online, Nodoka Hanadera/Cure Grace in Healin' Good PreCure, Krul Tepes in Seraph of the End, Madoka Kaname in Puella Magi Madoka Magica, Hibiki Tachibana in Senki Zesshou Symphogear, Diane in The Seven Deadly Sins, Tamaki Kotatsu in Fire Force, Mami Nanami in Kanojo, Okarishimasu, the young Murasaki Kuhōin in Kure-nai, and Kumoko in So I'm a Spider, So What?.

Kinoshita is a Japanese surname. Notable people with the surname include:

Amina Sato is a Japanese voice actor and a former member of the Japanese idol girl group AKB48. In AKB48 she was originally a 4th generation trainee, then in Team A, in Team B, and finally in Team K. Amina Sato was also a member of a pop group named No Name, which consisted of several AKB48 members voice acting in the animation series AKB0048. 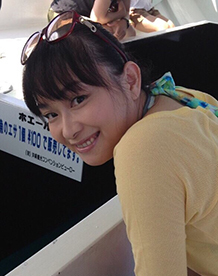 Asami Imai is a Japanese voice actress and singer affiliated with Early Wing. She debuted as a voice actress in 1999 and as singer in 2009 by releasing her first single "Day by Day / Shining Blue Rain" under the 5pb. Records label. She is also well known for giving voices to Chihaya Kisaragi in THE IDOLM@STER, Kurisu Makise in Steins;Gate, Tsubaki Yayoi in BlazBlue, and Ayumi Shinozaki in Corpse Party. She along with Eri Kitamura formed the music unit Artery Vein which is also under the 5pb. label.

Risa Yoshiki(吉木 りさ) is a Japanese gravure idol and singer. She has released two singles, seven DVDs, and appears regularly on TV and radio.

Rumi Okubo is a Japanese voice actress associated with 81 Produce. She has voiced starring characters in many anime shows, including: Astolfo in Fate/Apocrypha, Ako Shirabe/Cure Muse in Suite PreCure, Suguri Kinoshita in Happy Kappy, Chinatsu Yoshikawa in YuruYuri, Tsumiki Miniwa in Place to Place, Yuzuko Nonohara in Yuyushiki, Mia Ageha in Pretty Rhythm: Dear My Future, Emilia Hermit in Hundred, Hinako Saijō in Long Riders!, and Kotetsu in Tsugumomo. At the 7th Seiyu Awards, she won an award for Best Female Newcomer.

Ibuki Kido is a Japanese voice actress from Aomori Prefecture who is affiliated with HoriPro International. She began her career after participating in a voice acting audition held by Horipro in 2011. She played her first main role as Akiko Himenokōji in the 2012 anime series OniAi; she is also known for her roles as Natsuki Andō in Chronicles of the Going Home Club, Nanami Knight Bladefield in If Her Flag Breaks, Megumi Jinno in Eromanga Sensei, and Mio Minato in Aikatsu Friends!. From 2014 to 2017, she was a member of the singing duo Everying! together with Erii Yamazaki.

Danchi Tomoo is a Japanese manga series written and illustrated by Tobira Oda. An anime adaptation was announced in January 2013 and ran between April 2013 and February 2015.

Manami Numakura is a Japanese voice actress and singer. She is affiliated with Arts Vision. Her best-known role is in The Idolmaster video game franchise where she voices Hibiki Ganaha from the rival group known as Project Fairy. Other major roles include Riko in Love Lab, Takao in Arpeggio of Blue Steel, Machi Tokiwa in Hanayamata and Saya Endō in Dagashi Kashi. She made her solo music debut in 2016, performing the opening theme to the anime series Magical Girl Raising Project. From 2013 to 2016, she was a member of the voice acting unit Trident.

Aimi Terakawa, professionally known under the mononym Aimi is a Japanese voice actress and singer from Kobe, Hyōgo Prefecture who is affiliated with the talent agency Hibiki. After aspiring to become an entertainer for part of her life, she started her singing career in 2011 after winning an audition to become part of the Tantei Opera Milky Holmes franchise. That same year, she made her solo music debut with the release of her first single "Tenshi no Clover"; the title song was used as the opening theme to the anime series Astarotte no Omocha!. 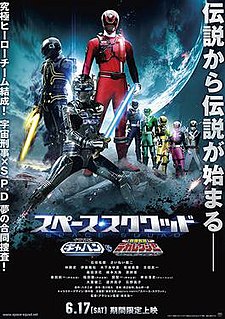 Sing "Yesterday" for Me is a Japanese manga series by Kei Toume. It began serialization in Shueisha's seinen manga magazine Business Jump in December 1997, and it moved to Shueisha's Grand Jump magazine in November 2011 where it ended in June 2015. It was collected in eleven tankōbon volumes. An anime television series directed by Yoshiyuki Fujiwara aired from April 4 to June 20, 2020. 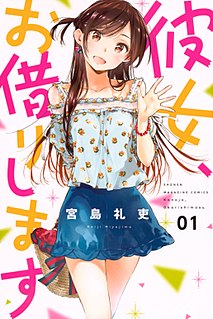 Rent-A-Girlfriend is a Japanese manga series written and illustrated by Reiji Miyajima. It has been serialized in Kodansha's Weekly Shōnen Magazine since July 2017, and has been compiled into twenty volumes as of April 2021. The series is licensed in North America by Kodansha Comics, which released the first volume in English in June 2020.