Maues and his successors had conquered the areas of Gandhara, as well as the area of Mathura from 85 BCE forming the Northern Satraps.

Azes's most lasting legacy was the foundation of the Azes era. It was widely believed that the era was begun by Azes's successors by simply continuing the counting of his regnal years. However, Prof. Harry Falk has recently presented an inscription at several conferences which dates to Azes's reign, and suggests that the era may have been begun by Azes himself. Most popular historians date the start of the Azes era to 58 BC and believe it is the same as the later era known as the Malwa or Vikrama era. [2]

However, a recently discovered inscription, the Bajaur reliquary inscription, dated in both the Azes and the Greek era suggests that actually this is not the case. The inscription gives the relationship Azes = Greek + 128. It is believed that the Greek era may have begun in 173 BCE, exactly 300 years before the first year of the Era of Kanishka. If that is the case then the Azes era would begin in about 45 BC. [3]

Azes I and Azes II identical?

According to Senior, Azes I may have been identical with Azes II, due to the discovery of an overstrike of the former over the latter. [4] 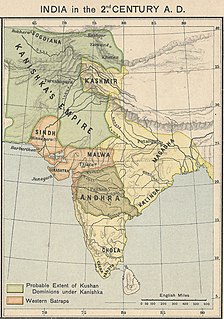 The Kushan Empire was a syncretic empire, formed by the Yuezhi, in the Bactrian territories in the early 1st century. It spread to encompass much of Afghanistan, and then the northern parts of the Indian subcontinent at least as far as Saketa and Sarnath near Varanasi (Benares), where inscriptions have been found dating to the era of the Kushan Emperor Kanishka the Great. Emperor Kanishka was a great patron of Buddhism. He played an important role in the establishment of Buddhism in the Indian subcontinent and its spread to Central Asia and China.

The Indo-Greek Kingdom or Graeco-Indian Kingdom, and historically known as Yavanarajya, was a Hellenistic kingdom spanning modern-day Afghanistan, into the classical circumscriptions of the Punjab of the Indian subcontinent, during the last two centuries BC and was ruled by more than thirty kings, often conflicting with one another.

Hermaeus Soter or Hermaios Soter was a Western Indo-Greek king of the Eucratid Dynasty, who ruled the territory of Paropamisade in the Hindu-Kush region, with his capital in Alexandria of the Caucasus. Bopearachchi dates Hermaeus to c. 90–70 BCE and R. C. Senior to c. 95–80 BCE. 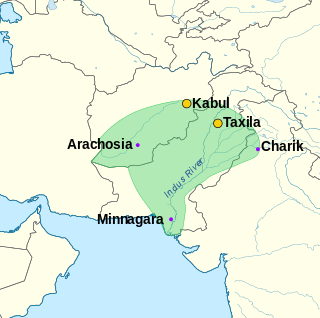 The Indo-Parthian Kingdom, also known as the Suren Kingdom, was a Parthian kingdom founded by the Gondopharid branch of the House of Suren, ruling from 19 to c. 224/5. At their zenith, they ruled an area covering parts of eastern Iran, various parts of Afghanistan and the northwest regions of the Indian subcontinent.

Indo-Scythians were an eastern Iranic nation from coterminous Pakistan and known to the Persians and Indians, as Saka, and to the Greeks as Scythians. They are known in literature from the middle of the 2nd century BC to the 4th century AD.

Theodamas seems to have been an Indo-Greek ruler in the Bajaur area of Gandhara, in modern Pakistan. 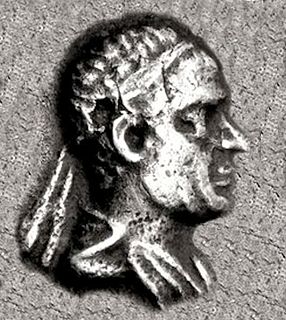 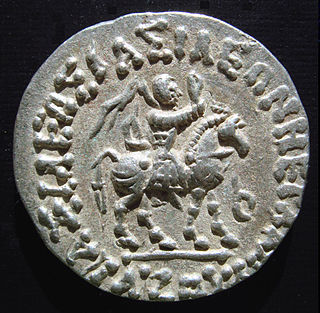 Azes II, may have been the last Indo-Scythian king in northern Indian subcontinent. His existence has been questioned — would he not have existed, artefacts attributed to his reign, such as coins, would likely be those Azes I.

Zeionises was an Indo-Scythian satrap of the area of southern Chach (Kashmir) for king Azes II.

Azilises was an Indo-Scythian king who ruled in the area of Gandhara. 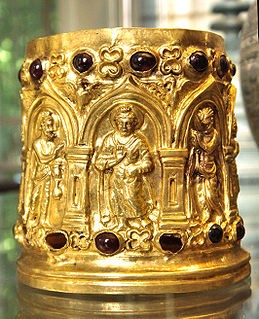 The Bimaran casket or Bimaran reliquary is a small gold reliquary for Buddhist relics that was found inside the stupa no.2 at Bimaran, near Jalalabad in eastern Afghanistan.

Kharahostes or Kharaostasa was an Indo-Scythian ruler in the northern Indian subcontinent around 10 BCE – 10 CE. He is known from his coins, often in the name of Azes II, and possibly from an inscription on the Mathura lion capital, although another satrap Kharaostes has been discovered in Mathura. 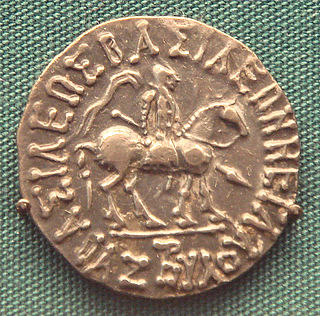 The "Azes era" starting 47/46 BCE, was named after the Indo-Scythian king, "King Azes the Great" or Azes I. As a number of inscriptions are dated in this era it is of great importance in dating the reigns of several kings and events in early Indian history.

The legacy of the Indo-Greeks starts with the formal end of the Indo-Greek Kingdom from the 1st century, as the Greek communities of central Asia and northwestern India lived under the control of the Kushan branch of the Yuezhi, apart from a short-lived invasion of the Indo-Parthian Kingdom. The Kushans founded the Kushan Empire, which was to prosper for several centuries. In the south, the Greeks were under the rule of the Western Kshatrapas. 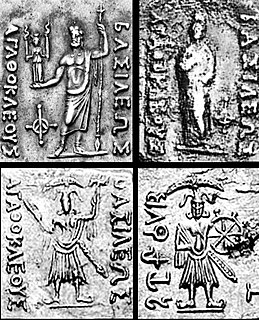 Indo-Greek art is the art of the Indo-Greeks, who reigned from circa 200 BCE in areas of Bactria and the Indian subcontinent. Initially, between 200 and 145 BCE, they remained in control of Bactria while occupying areas of India, until Bactria was lost to invading nomads. After 145 BCE, Indo-Greek kings ruled exclusively in parts of ancient India, especially in Gandhara and the area of Punjab. The Indo-Greeks had a rich Hellenistic heritage and artistic proficiency as seen with the remains of the city of Ai-Khanoum, which was founded as a Greco-Bactrian city. In India, several Indo-Greeks cities are known such as Sirkap near Taxila, or Barikot, where some Indo-Greek artistic remains have been found, such as stone palettes. Some Buddhist cultural objects related to the Indo-Greeks are known, such as the Shinkot casket. But by far the most important Indo-Greek remains in India are the beautiful and numerous coins of the Indo-Greek kings, considered as some of the most artistically brilliant of Antiquity. Most of the works of art of the Greco-Buddhist art of Gandhara are usually attributed to the direct successors of the Indo-Greeks in India in the 1st century CE, such as the nomadic Indo-Scythians, the Indo-Parthians and, in an already decadent state, the Kushans. Many Gandharan works of art cannot be dated exactly, leaving the exact chronology open to interpretation. With the realization that the Indo-Greeks ruled in India until at least 10-20 CE with the reign of Strato II in the Punjab, the possibility of a direct connection between the Indo-Greeks and Greco-Buddhist art has been reaffirmed recently.

The Yavana Era, Yona Era or Yonana Era was a computational era used in the Indian subcontinent from the 2nd century BCE for several centuries thereafter, probably starting in 174 BCE. It was initially thought that the era started around 186 BCE, and corresponded to accession to the Greco-Bactrian throne of Demetrius, who is said to have initiated the Indo-Greek conquest of parts of Northwestern South Asia. It is now equated with the formerly theorized "Old Śaka era".