Azhdarchidae (from the Persian word azhdar , اژدر, a dragon-like creature in Persian mythology) is a family of pterosaurs known primarily from the Late Cretaceous Period, though an isolated vertebra apparently from an azhdarchid is known from the Early Cretaceous as well (late Berriasian age, about 140 million years ago). [1] Azhdarchids included some of the largest known flying animals of all time, but smaller cat-size members have also been found. [2] Originally considered a sub-family of Pteranodontidae, Nesov (1984) [3] named the Azhdarchinae to include the pterosaurs Azhdarcho , Quetzalcoatlus , and Titanopteryx (now known as Arambourgiania ). They were among the last known surviving members of the pterosaurs, and were a rather successful group with a worldwide distribution. By the time of the end-Cretaceous mass extinction, most pterosaur families except for the Azhdarchidae disappear from the fossil record, but recent studies indicate a wealth of pterosaurian fauna, including pteranodontids, nyctosaurids, tapejarids and several indeterminate forms. [4] In several analyses, some taxa such as Navajodactylus , Bakonydraco and Montanazhdarcho were moved from Azhdarchidae to other clades. [5] [6] [7]

Azhdarchids are characterized by their long legs and extremely long necks, made up of elongated neck vertebrae which are round in cross section. Most species of azhdarchids are still known mainly from their distinctive neck bones and not much else. The few azhdarchids that are known from reasonably good skeletons include Zhejiangopterus and Quetzalcoatlus . Azhdarchids are also distinguished by their relatively large heads and long, spear-like jaws. There are two major types of azhdarchid morphologies: the "blunt-beaked" forms with shorter and deeper bills and the "slender-beaked" forms with longer and thinner jaws. [8]

It had been suggested azhdarchids were skimmers, [3] [9] but further research has cast doubt on this idea, demonstrating that azhdarchids lacked the necessary adaptations for a skim-feeding lifestyle, and that they may have led a more terrestrial existence similar to modern storks and ground hornbills. [10] [11] [12] [13] [14] Most large azhdarchids probably fed on small prey, including hatchling and small dinosaurs; in an unusual modification of the azhdarchid bodyplan, the robust Hatzegopteryx may have tackled larger prey as the apex predator in its ecosystem. [15] In another departure from typical azhdarchid lifestyles, the jaw of Alanqa may possibly be an adaptation to crushing shellfish and other hard foodstuffs. [16]

Azhdarchids are generally medium- to large-sized pterosaurs, with the largest achieving wingspans of 10–12 metres (33–39 ft), [17] but several small-sized species have recently been discovered. [18] [19] Another azhdarchid that is currently unnamed, recently discovered in Transylvania, may be the largest representative of the family thus far discovered. This unnamed specimen (nicknamed "Dracula" by paleontologists), currently on display in the Altmühltal Dinosaur Museum in Bavaria is estimated to have a wingspan of 12–20 m (39–66 ft), although similarities to the contemporary azhdarchid Hatzegopteryx have also been noted. [20]

Azhdarchids were originally classified as close relatives of Pteranodon due to their long, toothless beaks. Others have suggested they were more closely related to the toothy ctenochasmatids (which include filter-feeders like Ctenochasma and Pterodaustro ). Currently it is widely agreed that azhdarchids were closely related to pterosaurs such as Tupuxuara and Tapejara .[ citation needed ]

Classification after Unwin 2006, except where noted. [21]

The most complete cladogram of azhdarchids is presented by Andres (2021): [29]

An alternate phylogeny of Azhdarchidae was presented by Ortiz David et al. (2022) in their description of Thanatosdrakon: [30]

In this analysis, Alanqa is interpreted as a non-azhdarchid azhdarchoid closely related to Keresdrakon . [30]

Quetzalcoatlus is a genus of pterosaur known from the Late Cretaceous period of North America ; its members were among the largest known flying animals of all time. Quetzalcoatlus is a member of the Azhdarchidae, a family of advanced toothless pterosaurs with unusually long, stiffened necks. Its name comes from the Aztec feathered serpent god Quetzalcoatl. The type species is Q. northropi, named by Douglas Lawson in 1975; the genus also includes the smaller species Q. lawsoni, which was known for many years as an unnamed species before being named by Brian Andres and Wann Langston Jr. (posthumously) in 2021. 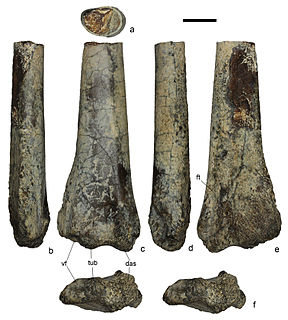 Azhdarcho is a genus of azhdarchid pterosaur from the late Cretaceous Period of the Bissekty Formation of Uzbekistan, as well as the Zhirkindek Formation of Kazakhstan. It is known from fragmentary remains including the distinctive, elongated neck vertebrae that characterizes members of the family Azhdarchidae, a family that includes many giant pterosaurs such as Quetzalcoatlus. The name Azhdarcho comes from the Persian word azhdar (اژدر), a dragon-like creature in Persian mythology. The type species is Azhdarcho lancicollis. The specific epithet lancicollis is derived from the Latin words lancea and collum ("neck").

Arambourgiania is an extinct genus of azhdarchid pterosaur from the Late Cretaceous period of Jordan, and possibly the United States. Arambourgiania was among the largest members of its family, the Azhdarchidae, and it is also one of the largest flying animals ever known. The incomplete left ulna of the "Sidi Chennane azhdarchid" from Morocco may have also belonged to Arambourgiania. 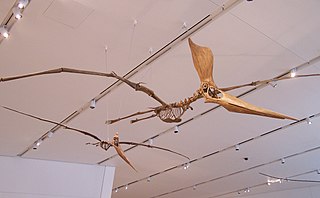 The Pteranodontidae are a family of large pterosaurs of the Cretaceous Period of North America and Africa. The family was named in 1876 by Othniel Charles Marsh. Pteranodontids had a distinctive, elongated crest jutting from the rear of the head. The spectacularly-crested Nyctosaurus is sometimes included in this family, though usually placed in its own family, the Nyctosauridae. 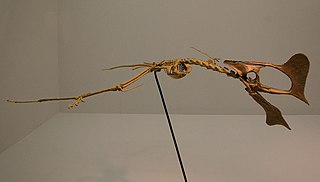 Tapejaridae are a family of pterodactyloid pterosaurs from the Cretaceous period. Members are currently known from Brazil, England, Hungary, Morocco, Spain, the United States, and China. The most primitive genera were found in China, indicating that the family has an Asian origin.

Hatzegopteryx is a genus of azhdarchid pterosaur found in the late Maastrichtian deposits of the Densuş Ciula Formation, an outcropping in Transylvania, Romania. It is known only from the type species, Hatzegopteryx thambema, named by Buffetaut et al. in 2002 based on parts of the skull and humerus. Additional specimens, including a neck vertebra, were later placed in the genus, representing a range of sizes. The largest of these remains indicate it was among the biggest pterosaurs, with an estimated wingspan of 10 to 12 metres. 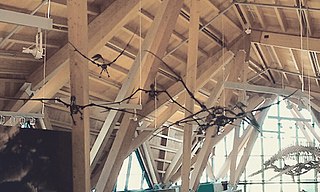 Bennettazhia is a genus of tapejaromorph pterosaur from the Early Cretaceous period of what is now the Hudspeth Formation of the state of Oregon in the United States. Although originally identified as a species of the pteranodontoid pterosaur Pteranodon, Bennettazhia is now thought to have been a different animal. The type and only species is B. oregonensis.

Eoazhdarcho is a genus of azhdarchoid pterodactyloid pterosaur named in 2005 by Chinese paleontologists Lü Junchang and Ji Qiang. The type and only known species is Eoazhdarcho liaoxiensis. The fossil was found in the Aptian-age Lower Cretaceous Jiufotang Formation of Chaoyang, Liaoning, China.

Phosphatodraco is a genus of azhdarchid pterosaur that lived during the Late Cretaceous of what is now Morocco. In 2000, a pterosaur specimen consisting of five cervical (neck) vertebrae was discovered in the Ouled Abdoun Phosphatic Basin. The specimen was made the holotype of the new genus and species Phosphatodraco mauritanicus in 2003; the genus name means "dragon from the phosphates", and the specific name refers to the region of Mauretania. Phosphatodraco was the first Late Cretaceous pterosaur known from North Africa, and the second pterosaur genus described from Morocco. It is one of the only known azhdarchids preserving a relatively complete neck, and was one of the last known pterosaurs. Additional cervical vertebrae have since been assigned to the genus, and it has been suggested that fossils of the pterosaur Tethydraco represent wing elements of Phosphatodraco. 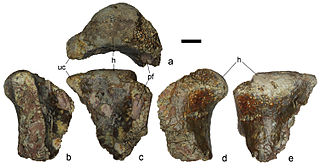 Aralazhdarcho is a genus of azhdarchid pterosaur from the Santonian to the early Campanian stages of the Late Cretaceous period of Bostobe Svita in Kazakhstan. The type and only known species is Aralazhdarcho bostobensis. 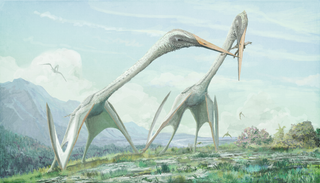 Pterosaurs included the largest flying animals ever to have lived. They are a clade of prehistoric archosaurian reptiles closely related to dinosaurs. Species among pterosaurs occupied several types of environments, which ranged from aquatic to forested. Below are the lists that comprise the smallest and the largest pterosaurs known as of 2022.

Alanqa is a genus of pterodactyloid pterosaur from the Late Cretaceous period of what is now the Kem Kem Beds of southeastern Morocco. The name Alanqa comes from the Arabic word العنقاءal-‘Anqā’, for a mythical bird of Arabian culture. 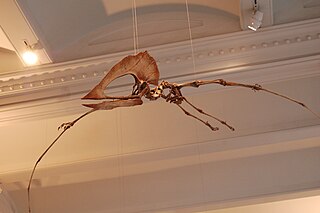 Thalassodrominae or Thalassodromidae is a group of azhdarchoid pterosaurs from the Cretaceous period. Its traditional members come from Brazil, however, other possible members also come from other places, including the United States, Morocco, and Argentina. Thalassodrominae is considered either to be a subfamily within the pterosaur family Tapejaridae, or as a distinct family, Thalassodromidae, within the clade Neoazhdarchia, closely related to dsungaripterids or azhdarchids. 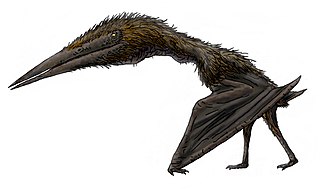 Aerotitan is a genus of large azhdarchid pterosaur known from the Late Cretaceous period of what is now the Allen Formation of the Neuquén Basin in northern Patagonia, Argentina.

Eurazhdarcho is a genus of azhdarchid pterosaur from the Late Cretaceous period of what is now the Transylvanian Basin of Romania. Its fossil remains dated back 69 million years ago. 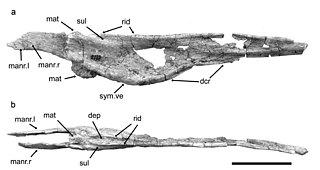 Argentinadraco is an extinct genus of azhdarchoid pterosaur from the Late Cretaceous Portezuelo Formation of Argentina. It contains a single species, A. barrealensis, named in 2017 by Alexander Kellner and Jorge Calvo. Argentinadraco is unusual for bearing a bottom jaw with a concave bottom edge, as well as a pair of ridges and depressions on the top surface. These features distinguish it from all other azhdarchoid groups, complicating its assignment, but it may belong to the Chaoyangopteridae. The ridges on the lower jaw may have been used to feed on small invertebrates in loose sediment within the system of lakes and rivers that it resided in. 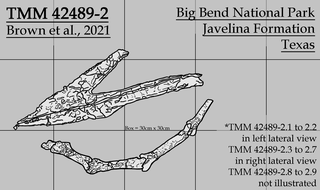 Wellnhopterus is an azhdarchid pterosaur recovered from the Late Cretaceous Javelina Formation in Texas that was previously identified as a thalassodromine. It consists of a set of upper and lower jaws, as well as some cervical vertebrae and a fragmentary long bone. In July 2021, the jaws were given the genus name "Javelinadactylus", with the type and only species as "J. sagebieli"; however, this article has now been retracted. In a paper published in December 2021, the complete holotype was independently named Wellnhopterus, with the only species being W. brevirostris. As of 2022, this is the formal name of this pterosaur.