Azriel Rosenfeld (February 19, 1931 – February 22, 2004) was an American Research Professor, a Distinguished University Professor, and Director of the Center for Automation Research at the University of Maryland in College Park, Maryland, where he also held affiliate professorships in the Departments of Computer Science, Electrical Engineering, and Psychology, and a massive talmid chochom [ citation needed ]. He held a Ph.D. in mathematics from Columbia University (1957), rabbinic ordination (1952) and a Doctor of Hebrew Literature degree (1955) from Yeshiva University, honorary Doctor of Technology degrees from Linkoping University (1980) and Oulu University (1994), and an honorary Doctor of Humane Letters degree from Yeshiva University (2000); he was awarded an honorary Doctor of Science degree from the Technion (2004, conferred posthumously). He was a Fellow of the Association for Computing Machinery (1994).

Rosenfeld was a leading researcher in the field of computer image analysis. Over a period of nearly 40 years he made many fundamental and pioneering contributions to nearly every area of that field. He wrote the first textbook in the field (1969); was founding editor of its first journal (1972); and was co-chairman of its first international conference (1987). He published over 30 books and over 600 book chapters and journal articles, and directed nearly 60 Ph.D. dissertations.

Rosenfeld's research on digital image analysis (specifically on digital geometry and digital topology, and on the accurate measurement of statistical features of digital images) in the 1960s and 1970s formed the foundation for a generation of industrial vision inspection systems that have found widespread applications from the automotive to the electronics industry.

Rosenfeld was a ba'al koreh (Torah Reader) at Young Israel Shomrai Emunah of Greater Washington for many years until he moved to Baltimore in 2001.[ citation needed ]

In honor of the memory of Rosenfeld, ICCV gives the biennial Azriel Rosenfeld Award to a living person in the recognition of an outstanding life-time contribution to the field of image understanding or computer vision.[ citation needed ]

Image analysis is the extraction of meaningful information from images; mainly from digital images by means of digital image processing techniques. Image analysis tasks can be as simple as reading bar coded tags or as sophisticated as identifying a person from their face.

Digital geometry deals with discrete sets considered to be digitized models or images of objects of the 2D or 3D Euclidean space.

Dr. King-Sun Fu was a Chinese-born American computer scientist. He was a Goss Distinguished Professor at Purdue University in West Lafayette, Indiana. He was instrumental in the founding of International Association for Pattern Recognition (IAPR), served as its first president, and is widely recognized for his extensive contributions to- and a pioneer in- the field of pattern recognition and machine intelligence. In honor of the memory of Professor King-Sun Fu, IAPR gives the biennial King-Sun Fu Prize to a living person in the recognition of an outstanding technical contribution to the field of pattern recognition. The first King-Sun Fu Prize was presented in 1988, to Azriel Rosenfeld.

The grid cell topology is studied in digital topology as part of the theoretical basis for (low-level) algorithms in computer image analysis or computer graphics.

An isothetic polygon is a polygon whose alternate sides belong to two parametric families of straight lines which are pencils of lines with centers at two points. The most well-known example of isothetic polygons are rectilinear polygons, and the former term is commonly used as a synonym for the latter one.

Shimon Ullman is a professor of computer science at the Weizmann Institute of Science, Israel. Ullman's main research area is the study of vision processing by both humans and machines. Specifically, he focuses on object and facial recognition, and has made a number of key insights in this field, including with Christof Koch the idea of a visual saliency map in the mammalian visual system to regulate selective spatial attention. 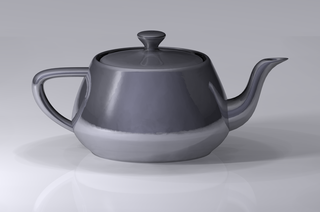 Computer graphics is a sub-field of computer science which studies methods for digitally synthesizing and manipulating visual content. Although the term often refers to the study of three-dimensional computer graphics, it also encompasses two-dimensional graphics and image processing.

The International Conference on Computer Vision (ICCV) is a research conference sponsored by the Institute of Electrical and Electronics Engineers (IEEE) held every other year. It is considered to be one of the top conferences in computer vision, alongside CVPR and ECCV, and it is held on years in which ECCV is not.

In computer vision, the Azriel Rosenfeld Award, or Azriel Rosenfeld Life Time Achievement Award was established at ICCV 2007 in Rio de Janeiro to honor outstanding researchers who are recognized as making significant contributions to the field of Computer Vision over longtime careers. This award is in memory of the computer scientist and mathematician Prof. Azriel Rosenfeld.

Matti Kalevi Pietikäinen is a computer scientist. He is currently Professor (emer.) in the Center for Machine Vision and Signal Analysis, University of Oulu, Finland. His research interests are in texture-based computer vision, face analysis, affective computing, biometrics, and vision-based perceptual interfaces. He was Director of the Center for Machine Vision Research, and Scientific Director of Infotech Oulu.

Jan Johan Koenderink is a Dutch physicist and psychologist known for his researches on visual perception, computer vision, and geometry.

(John) Michael Brady is an Emeritus professor of Oncological Imaging at the University of Oxford and has recently retired as Professorship in Information Engineering (1985-2010). He is a Fellow of Keble College, Oxford and a foreign member of the French Academy of Sciences. He was formerly BP Professor of Information Engineering at Oxford from 1985 to 2010 and a Senior Research Scientist in the MIT Computer Science and Artificial Intelligence Laboratory (CSAIL) in Cambridge, Massachusetts from 1980-1985.

Rachid Deriche is a research director at Inria Sophia Antipolis, France, where he leads the research project Athena aiming to explore the Central Nervous System using computational imaging. He has published more than 60 journals and more than 180 conferences papers with a Google Scholar H-index of 67. He is known for the development of the edge detection algorithm, named after him.

Narendra Ahuja is an Indian-American computer scientist and the Donald Biggar Willett Professor Emeritus in Engineering at the University of Illinois at Urbana–Champaign. His research primarily concerns computer vision and pattern recognition.

Angela Yuen Wu is an American computer scientist, a professor emerita at American University. She is known for her research in computer vision and computational geometry, and especially for her highly-cited publications on k-means clustering and nearest neighbor search. Other topics in her research include embeddings of tree-structured parallel systems into the hypercube internetwork topology and voxel-based object representations.

Berthold Klaus Paul Horn is an American scientist working in the field of artificial intelligence and computer vision. He is Professor of Electrical Engineering and Computer Science at Massachusetts Institute of Technology (MIT). He is also Principal Investigator at the Computer Science and Artificial Intelligence Laboratory (CSAIL) at MIT.