Bärenreiter (Bärenreiter-Verlag) is a German classical music publishing house based in Kassel. The firm was founded by Karl Vötterle (1903–1975) in Augsburg in 1923, and moved to Kassel in 1927, where it still maintains headquarters; it also has offices in Basel, London, New York and Prague. The company is currently managed by Barbara Scheuch-Vötterle and Leonhard Scheuch.

Since 1951, the company's focus has been on the New Complete Editions series for various composers. These are urtext editions, and cover the entire work of the selected composer. Series include: J.S. Bach (the Neue Bach-Ausgabe , a joint project with the Deutscher Verlag für Musik), Berlioz, Gluck, Händel, Janáček, Mozart, Rossini, [1] Schubert, Telemann and others.

Breitkopf & Härtel is the world's oldest music publishing house. The firm was founded in 1719 in Leipzig by Bernhard Christoph Breitkopf.

The courante, corrente, coranto and corant are some of the names given to a family of triple metre dances from the late Renaissance and the Baroque era. In a Baroque dance suite an Italian or French courante is typically paired with a preceding allemande, making it the second movement of the suite or the third if there is a prelude.

Friedrich Blume was professor of musicology at the University of Kiel from 1938–1958. He was a student in Munich, Berlin and Leipzig, and taught in the last two of these for some years before being called to the chair in Kiel. His early studies were on Lutheran church music, including several books on J.S. Bach, but broadened his interests considerably later. Among his prominent works were chief editor of the collected Praetorious edition, and he also edited the important Eulenburg scores of the major Mozart Piano Concertos. From 1949 he was involved in the planning and writing of Die Musik in Geschichte und Gegenwart. Coincidentally he died within a few weeks of another prominent Mozart musicologist, Cuthbert Girdlestone, and was thus almost his exact contemporary.

G. Henle Publishers is a German publishing house that specializes in urtext editions of sheet music. The programme includes works by composers from all different periods, in particular composers from the baroque to the early twentieth century whose works are no longer under copyright. In addition to its sheet music, G. Henle Publishers also produces scholarly complete editions, books, reference works and periodicals.The publishing house also offers its Urtext editions in digital form, available in an app for tablets. 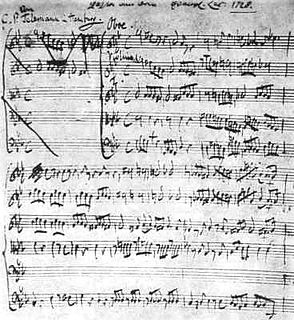 Between 1716 and 1767, Georg Philipp Telemann wrote a series of Passions, musical compositions reflecting on Christ's Passion – the physical, spiritual and mental suffering of Jesus from the hours prior to his trial through to his crucifixion. The works were written for performance in German churches in the days before Easter. A prolific composer, Telemann wrote over 40 Passions for the churches of Hamburg alone, of which 22 have survived according to the present state of research. He also wrote several Passion oratorios. Unlike the Passions intended for liturgical performance, they were not closely set to the literal text of the Gospels.

O ewiges Feuer, o Ursprung der Liebe, BWV 34.2 is an incomplete wedding cantata composed by Johann Sebastian Bach, of which only the complete libretto and some parts have survived.

Philip Gossett was an American musicologist and historian, and Robert W. Reneker Distinguished Service Professor of Music at the University of Chicago. His lifelong interest in 19th-century Italian opera began with listening to Metropolitan Opera broadcasts in his youth. Divas and Scholars: Performing Italian Opera, a major work on the subject, won the Otto Kinkeldey Award of the American Musicological Society as best book on music of 2006.

Alfred Dürr was a German musicologist. He was a principal editor of the Neue Bach-Ausgabe, the second edition of the complete works of Johann Sebastian Bach.

Carus-Verlag is a German music publisher founded in 1972 and based in Stuttgart.

The Johann Sebastian Bach Institute was an institute dedicated to Johann Sebastian Bach in Göttingen, Germany. It was founded in 1951 as one of two institutes preparing the New Bach Edition, the second complete edition of the composer's works. The partner organisation was the Leipzig Bach Archive in what was then East Germany on the other side of the Iron Curtain from Göttingen. The new edition met rigorous scientific requirements and at the same time served musical practice. 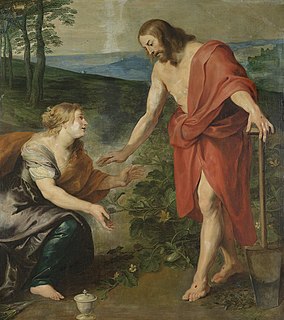 Weib, was weinest du, SWV 443, is a sacred choral work by Heinrich Schütz. It was composed not later than 1625 and is scored for four voices and basso continuo.

Konrad Küster is a German musicologist.

Georg von Dadelsen was a German musicologist, who taught at the University of Hamburg and the University of Tübingen. He focused on Johann Sebastian Bach, his family and his environment, and the chronology of his works. As director of the Johann Sebastian Bach Institute in Göttingen, he influenced the Neue Bach-Ausgabe (NBA), the second complete edition of Bach's works.

Richard Hellmuth Baum was a German musicologist and music historian.