The B.A.A. 10K is an annual road running event for men and women over 10 kilometers (6.2 mi) that takes place in June in Boston in the United States. A total of 3040 people finished the race at the inaugural edition. [2]

The B.A.A. 10K is one of two major annual races that cover the 10 kilometer distance in the city, alongside the Tufts Health Plan 10K for women, which is held in October. [3]

First organized by the Boston Athletic Association (B.A.A.) in 2011, the event represented a further expansion of the group's road running calendar; building on the long-running Boston Marathon, the B.A.A. Half Marathon and B.A.A. 5K were launched in 2001 and 2009 respectively. [4] Unlike the association's more prominent competitions, the 10K does not require that participants achieve a qualifying time to enter the race. The race has a mix of amateur and professional, elite level runners, and a total prize pot of US$30,000 is available. [5]

The course for the race is set in Boston's Back Bay neighborhood. It follows a closely looped format, heading west to east with Charles Street acting as both the start and finish point of the race. The race begins by following the perimeter of the Public Garden before heading west along Commonwealth Avenue and Bay State Road. After reaching the halfway point near the intersection with Babcock Street, the course loops back on itself and runs along Commonwealth Avenue until the finish line on Charles Street. [6] The course passes city landmarks including the Cheers Beacon Hill bar and the campus of Boston University. [5]

The men's and women's winners of the 2011 Boston Marathon ran in the first B.A.A. 10K and both won their respective categories. Geoffrey Mutai won the men's race in 27 minutes 19 seconds (a state record), while Caroline Kilel crossed the line in 31:58 to win the women's section. [7] Mutai defended his title a year later while Kim Smith set a women's record of 31:36. [8]

The B.A.A. 10K is one of two major annual races over the distance in the city, alongside the Tufts Health Plan 10K for women, which is held in October. [3]

The 2017 race was run under sunny skies with a temperature of 65 degrees at the start of the race with rising humidity for the 8,143 registered runners. The men's division was won by Daniel Chebii in 27:58 and the women's division winner was Joan Chelimo in 31:24. Both runners took home the $10,000 prize for winning their respective division. [1] 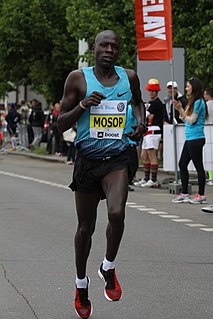 Deriba Merga Ejigu is an Ethiopian long-distance runner. He mainly competes in the marathon. He finished fourth in that event at the 2008 Beijing Olympics and went on to win the Boston Marathon the following year. His personal best for the distance is 2:06:38 hours.

Aheza Kiros is an Ethiopian long-distance runner who specializes in the 10,000 metres. 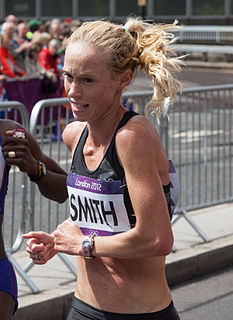 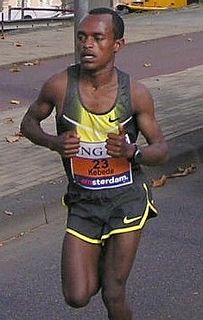 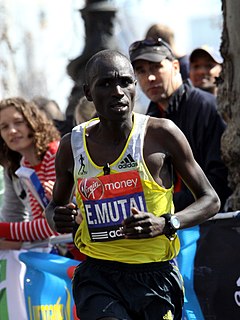 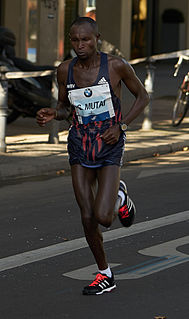 The 2011 New York City Marathon was the 42nd running of the annual marathon race in New York City, United States, which took place on Sunday, November 6. Sponsored by ING Group, it was the final race of the 2010/11 World Marathon Majors series and an IAAF Gold Label Road Race. Geoffrey Mutai of Kenya won the men's elite race in a course record time of 2:05:05 hours while Ethiopia's Firehiwot Dado won the women's section in a time of 2:23:15.

Philip Kiprono Langat is a Kenyan long-distance runner who specialises in road running events. He won the 2011 Montferland Run. He has a half marathon best of 1:01:05 and a 10K best of 27:28 minutes. 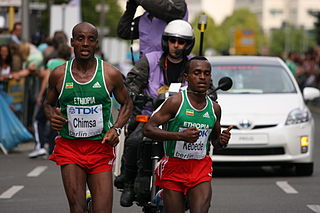 Deressa Chimsa Edae is an Ethiopian long-distance runner who competes in marathon races. He represented Ethiopia in the event at the 2009 World Championships in Athletics. His personal best of 2:05:42 hours was set at the 2012 Dubai Marathon. He won the Daegu Marathon in 2010. 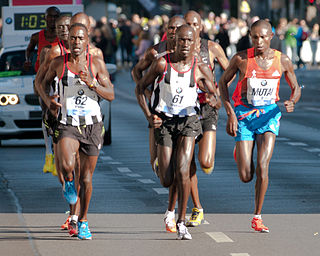 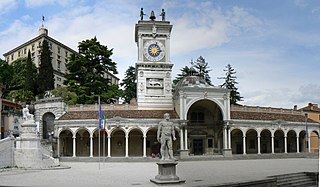 Ezekiel Kiptoo Chebii is a Kenyan long-distance runner who competes in half marathon and marathon races. He has personal bests of 59:05 minutes and 2:09:15 hours, respectively. His half marathon best ranks him among the top twenty all-time for the distance. He has won the Madrid Marathon and the Lille Half Marathon, both in course record times.

Joan Chelimo Melly is a Kenyan female long-distance runner who competes in road running competitions. She is the 2018 Prague Half Marathon Champion and the winner of other prestigious road races such as Berlin Half Marathon, Boston 10K and Boston Half Marathon.