BBC Redux is a BBC Research & Development system that digitally records [1] television and radio output in the United Kingdom produced by the British Broadcasting Corporation. [2] :2 It has been operating since 2007 [1] and contains several petabytes of recordings [1] and subtitle data. [1] It is notable for being the proof of concept for the Flash video streaming version of the BBC iPlayer. [2] :15

It is an internal research project developed for testing [3] [4] [5] which acts as a giant video on demand or personal video recorder (PVR). [3] It contains a complete digital archive, recording both television and radio twenty-four hours a day, of all of the BBC's national and also some regional broadcast output since mid-2007, [6] [7] and is automatically compiled without human input. [2] :5 [5] The BBC stated that BBC Redux is one of its major contributions to the field of digital archiving and preservation. [8]

Some accounts for accessing the system on a temporary basis were made available at Mashed 08 [9] and again at Culture Hack Day 2011, [10] providing streaming-only access to BBC content broadcast during the weekend of the event. [11] As well as streaming, the system enables high-quality downloads of television and radio content, [12] and has had the option to download subtitles from programmes since 2008. [13]

BBC Redux had originally been developed at the BBC's Kingswood Warren campus, [14] in only two months, [15] and with the investment required being significantly less than the iPlayer. [5] The saved content can be used for broadcast compliance checking [2] :16 and by BBC programme researchers. [16] As of 2012 [update] , BBC Redux is only available to employees, because existing legal contracts with content producers limit how material can be broadcast, distributed and made available to general consumers. [17] [18] The Readme file for associated API frameworks hosted on GitHub states:

BBC Snippets and BBC Redux are tools designed to allow BBC staff to develop new ways to view and navigate content. As such, they're not open to the public. [19]

A series of standard Digital Video Broadcasting terrestrial antennas and satellite dishes, coupled to DVB-T and DVB-S TV tuner cards are used to capture the incoming DVB multiplexes [18] transmitted for over-the-air Freesat and Freeview terrestrial television. [2] :5 These raw MPEG transport streams are split into single-programme MPEG transport streams, encapsulated in RTP, and sent using UDP IP multicast within the IPv4 multicast address range 233.122.227.0/24 from AS31459. [2] :5 From the multicast streams individual television programmes can be extracted and saved, without requiring any transcoding or conversion of the contained MPEG-2 video data. [2] :5

As of May 2009 [update] , racks of Sun Fire T1000 and T2000 machines were used acquiring and storing the incoming programmes respectively; while commodity x86-64 computers were used for database operations and playback transcoding. [2] :4 The T2000 storage nodes are connected by 10 Gigabit Ethernet on the network side, [2] :7 and then by serial attached SCSI to RAID boxes containing high-capacity commodity Serial ATA hard disk drives. [2] :7 The "fsck-free" ZFS file system is used after experiments with Unix File System (UFS) proved it to be too slow. [2] :8 Sun Microsystems had to manually repair the filesystems on two occasions using Unix dd. [2] :11–13

The software is based on open source technologies, [5] and uses a combination of mod_perl and C running on OpenSolaris. [2] :9,14 A series of "lolcat" images are used for the system's HTTP 404 and error pages. [21]

As part of the European Union (EU) "NoTube" project running between 2009–12, a recommendation research system using Lonclass categorisation and Tanimoto coefficient matching was tested by the BBC R&D Audience Experience team and integrated with 23,000 recordings delivered from Redux. [22] The matching dataset was gathered over a period of five months. [23]

During 2010, Safari [25] and Google Chrome [26] browser extensions were developed to integrate Redux content with the main www.bbc.co.uk/programmes directory. [27]

In January 2012, the BBC's Multimedia Classification team announced they were hoping to test and add "mood-based navigation" to the existing BBC Redux interface, [28] [29] [30] along with audience measurement and other rich metadata comprising work part-funded by the Technology Strategy Board. [6] During 2010–2011 BBC Research and Development integrated content archived in BBC Redux with the BBC's existing internal BBC InFax system, allowing finding of metadata and archive content within the same browser window, [31] covering news and subtitles from over the previous five years. [32]

During March 2012, the Atlas index changed the method of equivalence matching used for indexing against BBC Redux. [33]

Digital Video Broadcasting - Satellite - Second Generation (DVB-S2) is a digital television broadcast standard that has been designed as a successor for the popular DVB-S system. It was developed in 2003 by the Digital Video Broadcasting Project, an international industry consortium, and ratified by ETSI in March 2005. The standard is based on, and improves upon DVB-S and the electronic news-gathering system, used by mobile units for sending sounds and images from remote locations worldwide back to their home television stations. 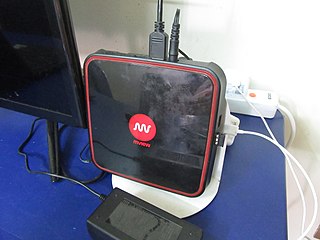 MPEG transport stream or simply transport stream (TS) is a standard digital container format for transmission and storage of audio, video, and Program and System Information Protocol (PSIP) data. It is used in broadcast systems such as DVB, ATSC and IPTV.

BBC Research & Development is the technical research department of the BBC.

IP over DVB implies that Internet Protocol datagrams are distributed using some digital television system, for example DVB-H, DVB-T, DVB-S, DVB-C or their successors like DVB-S2. This may take the form of IP over MPEG, where the datagrams are transferred over the MPEG transport stream, or the datagrams may be carried in the DVB baseband frames directly, as in GSE.