Baarle-Nassau ( pronunciation  (help·info)) is a municipality and town in the southern Netherlands, located in province of North Brabant. It had a population of 6,803 in 2017. The town is the site of a complicated borderline between Belgium and Netherlands, with numerous small exclaves of Belgium, of which some contain counter-exclaves of the Netherlands.

Topographic map of the municipality of Baarle-Nassau, June 2015.

The border with Baarle-Hertog, Belgium

Baarle-Nassau is closely linked, with complicated borders, to the Belgian exclaves of Baarle-Hertog. Baarle-Hertog consists of 26 separate pieces of land. Apart from the main piece (called Zondereigen) located north of the Belgian town of Merksplas, there are 22 Belgian exclaves in the Netherlands and three other pieces on the Dutch-Belgian border. There are also six Dutch exclaves located within the largest Belgian exclave, one within the second-largest, and an eighth within Zondereigen. The smallest Belgian parcel, H7, locally named De Loversche Akkers, measures 2,469 square metres (26,580 sq ft).

Baarle-Hertog, known as Baerle-Duc in French, is a Flemish municipality of Belgium, much of which consists of a number of small Belgian exclaves in the Netherlands.

Merksplas is a municipality located in the Belgian province of Antwerp. The municipality comprises only the town of Merksplas proper. On January 1, 2016, Merksplas had a total population of 8,642. The total area is 44.56 km² which gives a population density of 194 inhabitants per km².

The border's complexity results from numerous medieval treaties, agreements, land-swaps and sales between the Lords of Breda and the Dukes of Brabant. Generally speaking, predominantly agricultural or built environments became constituents of Brabant, while other parts devolved to Breda. These distributions were ratified and clarified as a part of the borderline settlements arrived at during the Treaty of Maastricht in 1843. 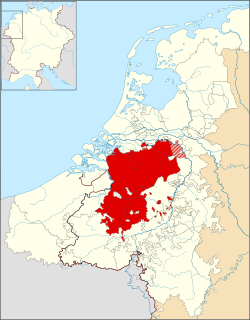 The Treaty of Maastricht, signed in 1843 by Belgium and the Netherlands four years after the Treaty of London established Belgian independence, finally settled the border between the two countries.

For clarification and the interest of tourists, the border is made visible on all streets with iron pins. This way it is always clear whether one is in Belgium (Baarle-Hertog) or in The Netherlands (Baarle-Nassau). This is also visible on the house numbers: the style of house numbers is different in both countries and often one will find the Dutch or Belgian flag next to the number.

Ulicoten is a village in the Dutch province of North Brabant. It is a part of the municipality of Baarle-Nassau and is situated about 16 km south of Breda.

These are all part of Baarle-Nassau Commune.

These are all part of Baarle-Hertog Commune, and are surrounded by Baarle-Nassau Commune (Netherlands).

Petrus Christus was an Early Netherlandish painter active in Bruges from 1444, where, along with Hans Memling, he became the leading painter after the death of Jan van Eyck. He was influenced by van Eyck and Rogier van der Weyden and is noted for his innovations with linear perspective and a meticulous technique which seems derived from miniatures and manuscript illumination. Today, some 30 works are confidently attributed to him. The best-known include the 1446 Portrait of a Carthusian and c. 1470 Berlin Portrait of a Young Girl, both are highly innovative in presentation of the figure against detailed, rather than flat, backgrounds.

Jan van Eyck was a Flemish painter active in Bruges. He is one of the early innovators of what became known as Early Netherlandish painting, and one of the most significant representatives of Early Northern Renaissance art. The surviving records of his early life indicate that he was born around 1380–1390, most likely in Maaseik, in present day Belgium. He took employment in the Hague around 1422, when he was already a master painter with workshop assistants, and employed as painter and valet de chambre with John III the Pitiless, ruler of Holland and Hainaut. He was then employed in Lille as court painter to Philip the Good, Duke of Burgundy after John's death in 1425, until he moved to Bruges in 1429 where he lived until his death. He was highly regarded by Philip and undertook a number of diplomatic visits abroad, including to Lisbon in 1428 to explore the possibility of a marriage contract between the duke and Isabella of Portugal.

Drimmelen is a municipality and a town in the southern Netherlands, in the province North Brabant. 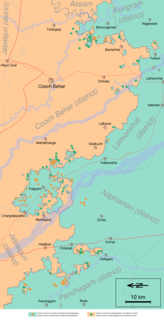 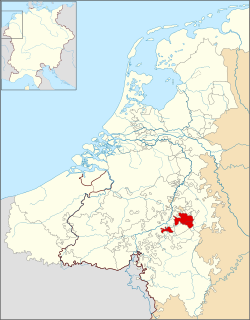 Heikant is a hamlet in the Dutch province of North Brabant. It is a part of the municipality of Baarle-Nassau, and lies about 16 km south of Breda, just south of the village of Ulicoten.

Brabantse Stedenrij is a polycentric city region in the province of North Brabant, Netherlands. Its population is about 2 million. The main cities are 's-Hertogenbosch, Breda, Eindhoven, Helmond and Tilburg. Other municipalities of the area are Bergen op Zoom, Oss and Roosendaal. The metropolitan region also includes other large towns such as Boxtel, Etten-Leur, Oosterhout, Uden, Veghel, Veldhoven and Waalwijk. 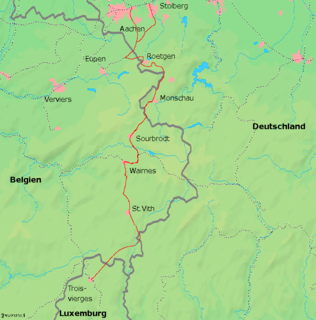 The Vennbahn is a former railway line that was built partly across what was then German territory by the Prussian state railways. It is now entirely in Belgium, because the trackbed of the line, as well as the stations and other installations, were made provisional Belgian territory in 1919 under an article of the Treaty of Versailles.

The Redemptiedorpen are a group of small villages north of Liège, Belgium. Their ownership was disputed between the United Provinces and the Duchy of Brabant since the 17th century. The areas retained independence, with the condition that they pay taxes to both powers. In practice, they were closely linked to the tweeherigheid of Maastricht.

Zondereigen is a village in the municipality of Baarle-Hertog, in the province of Antwerp, Belgium. As of 2006, it has 429 inhabitants on an area of 4.78 square kilometers.

The Belgium–Netherlands border separates Belgium and the Netherlands and is 450 km (280 mi) long.