Baengnyeong Island (sometimes spelled Baekryeong; Korean pronunciation:  [pɛŋȵʌŋdo] ) is a 45.8-square-kilometre (17.7 sq mi), 8.45-kilometre (5.25 mi) long and 12.56-kilometre (7.80 mi) wide island in Ongjin County, Incheon, South Korea, located near the Northern Limit Line. [1] The 1953 Korean Armistice Agreement which ended the Korean War specified that the five islands including Baengnyeong Island would remain under United Nations Command and South Korean control. This agreement was signed by both the DPRK and the United Nations Command. [2] Since then, it has served as a maritime demarcation between North and South Korea in the Yellow Sea. It has a population of approximately 4,329. [3]

The meaning of its name is "white wing island", since the island resembles a flying ibis with its wings spread. [4]

Given its proximity to North Korea, it has served as a base for intelligence activity by South Korea.[ citation needed ]. Numerous North Korean defectors have also boated here to escape economic and political conditions in their homeland. In the recent past there have been several naval skirmishes between the two countries in the area, and Kim Jong-Un threatened on 11 March 2013 to wipe it out. [5]

Natural monuments of South Korea #391–#393 are located on Baengnyeong Island.

Baengnyeong Island is the westernmost point of South Korea. Travel time by boat to the island from Incheon is about four hours. [6]

The area is also rich in oceanic fauna and bird diversity. The Chinese egret, which is considered to be one of the fifty rarest birds in the world, can be found here. The area hosts a nature reserve for spotted seals, [7] and they can be observed on the rocks and beaches. [6] Seals occasionally attract predators such as the great white shark into the area. [8] [9] Finless porpoisees in adjacent waters are also curious and playful. [10] The Incheon Coast Guard has been investigating illegal whaling targeting minke whales in the area. [11] [12] [13]

Owing to the geographical location, Christianity went through Baengnyeong Island ahead of other Korean regions. After the Gabo Reform, Kim Seong-jin was exiled to this island, and the first church in Korea was established in 1896. There are ten churches on the island at the present time.[ when? ]

During the Korean War, the USAF designated the airfield on Paengyong-do as K-53.

The island was defended by the West Coast Island Defense Task Unit composed of men of the 2d Korean Marine Corps Regiment under the direction of US Marines. [18]

In April 1951 Paengyong-do was used as a staging base for a mission to recover wreckage of a downed Mikoyan-Gurevich MiG-15 near the Chongchon River. On 17 April 1951 a USAF Sikorsky H-19 carried a US/South Korean team to the crash site and they photographed the wreck and removed the turbine blades, combustion chamber, exhaust pipe and horizontal stabilizer. The overloaded helicopter then flew the team and samples back to Paengyong-do where they were transferred onto an SA-16 and flown south for evaluation. [19]

In December 1951 two Sikorsky H-5s of the USAF 3d Air Rescue Squadron were based on the island and would forward deploy daily to Chodo Airport to operate search and rescue missions before being permanently deployed to Chodo in January 1952. The H-5s were later replaced by the more capable Sikorsky H-19, two of which were based at Chodo and one on Paengyong-do. [21]

On 12 November 1952 several aircraft, believed to be Po-2s, bombed the base in a night attack causing minimal damage. [22]

The South Korean naval vessel ROKS Cheonan sank near the island on 26 March 2010. The 1,200 ton vessel broke in two pieces with nearly half the crew dying (mainly in the stern section) and a little more than half surviving (mainly in the bow section). A multinational investigation concluded that a North Korean torpedo struck the ship.

Buyeo County (Buyeo-gun) is a county in South Chungcheong Province, South Korea. Buyeo-eup, the county's capital, was the site of the capital of Baekje from 538-660 AD, during which it was called Sabi Fortress.

Chungju is a city in North Chungcheong province, South Korea. Uamsan is a mountain located within the outskirts of the city. 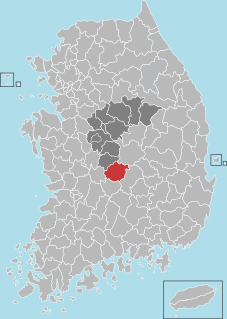 Yeongdong County is a county in North Chungcheong Province, South Korea. The county should not be confused with the similarly named Yeongdong region. 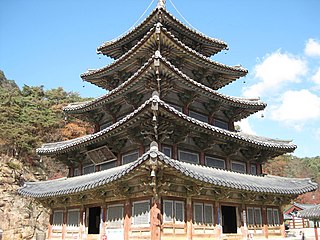 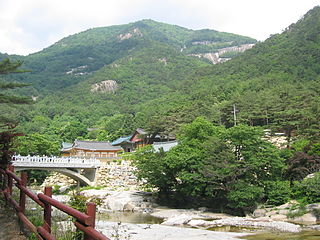 Donghae is a city in Gangwon Province, South Korea. There are two major ports: Donghae Harbor and Mukho Harbor. The city is located on the Yeongdong Line railroad and the Donghae Expressway. Numerous caverns are found in the city, as in neighboring Samcheok. Hanzhong University is located here.

Taebaek is a city in Gangwon province, South Korea. Its name is shared with that of the Taebaek Mountains. Situated at an altitude of 650 to 700 m, Taebaek is the highest city in South Korea.

Wonju is the most populous city in Gangwon province, South Korea. 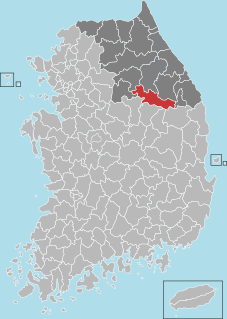 Wando County (Wando-gun) is a county in South Jeolla Province, South Korea. It takes its name from the island of Wando, which is the largest island within the county and serves as the county seat. Wando island is perhaps most famous for Cheonghaejin, the former headquarters of Jang Bogo, a 9th-century Korean historical figure whose private fleet and army dominated the sea routes in the Yellow Sea. Wando's most famous native in modern times is champion golfer K.J. Choi.

Dongducheon is a city in Gyeonggi Province, South Korea.

Icheon is a city in Gyeonggi Province, South Korea. It should not be confused with the much larger Incheon Metropolitan City. Neighboring districts include Yeoju City, Gwangju City, Yongin City, and Anseong City within Gyeonggi Province, as well as Eumseong County in North Chungcheong Province. Together with Yeoju, Icheon is known as a center of South Korean ceramic manufacturing and is a UNESCO City of Crafts and Folk Art. Other famous local products include peaches and rice. Local institutions of higher learning include Korea Tourism College and Chungkang College of Cultural Industries.

Boryeong, commonly known as Daecheon, is a city in South Chungcheong Province, South Korea. It is located on the coast of the Yellow Sea. It lies on the Janghang Line railroad, which connects it to Seoul via the Gyeongbu Line. It is also connected to the Seohaean Expressway. Boryeong is known around Korea for its beaches, particularly Daecheon Beach, and its annual mud festival around July, Boryeong Mud Festival. The city's beach-mud is widely touted for its cosmetic properties. As elsewhere along the southwest coast of the Korean peninsula, there are numerous small islands, many of which are connected by ferry to Daecheon Port.

Ganghwa County is a county in the city of Incheon, South Korea. The county is composed of Ganghwa Island, and the minor islands around it. 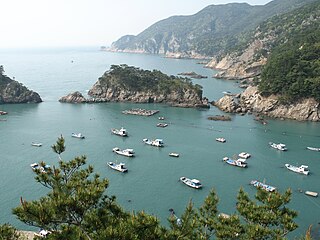 Heuksando is an island in the Yellow Sea located off 97.2 km from the southwest coast of Mokpo, Jeollanam-do, South Korea. It covers an area of 19.7㎢ and consists of several peaks: Munamsan, Gitdaebong, Seonyubong, Sangrabong. It is within the administrative boundaries of Sinan County, Jeollanam-do, South Korea since 1969. The island's 19.7 km² are home to about 3,133 people. 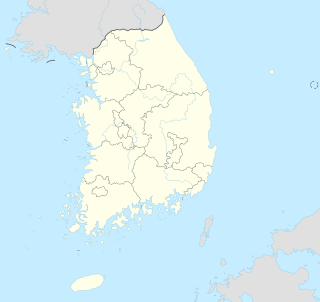