It is bordered by the Somali regions of Hiiraan, Bay and Gedo.

Bakool, like Gedo and Bay, as well as most parts of the Jubbada Dhexe (Middle Juba) region, used to be a part of the old Upper Region, which was subdivided in the mid-1980s. It has its capital at Xuddur.

In March 2014, Somali Armed Forces assisted by an Ethiopian battalion with AMISOM re-captured the Bakool province's capital Hudur from the Al-Shabaab militant group. [3] The offensive was part of an intensified military operation by the allied forces to remove the insurgent group from the remaining areas in southern Somalia under its control. [4]

Bay is an administrative region (gobol) in southern Somalia.

Baidoa (Somali: Baydhabo; is capital in the southwestern Bay region of Somalia. During the Middle Ages, Baidoa and its surrounding area was part of the Ajuran Sultanate.

The Somali Civil War is an ongoing civil war taking place in Somalia. It grew out of resistance to the military junta led by Siad Barre during the 1980s. By 1988–90, the Somali Armed Forces began engaging various armed rebel groups, including the Somali Salvation Democratic Front in the northeast, the Somali National Movement in the northwest, and the United Somali Congress in the south. The clan-based armed opposition groups eventually managed to overthrow the Barre government in 1991.

Hudur is a town in the south Western Bakool region of Somalia. It serves as the province's capital and is the center of the Hudur District.

Wajid is a town in the southern Bakool region of Somalia. It is the center of the Wajid District.

The African Union Mission in Somalia (AMISOM) is an active, regional peacekeeping mission operated by the African Union with the approval of the United Nations Security Council. It is mandated to support transitional governmental structures, implement a national security plan, train the Somali security forces, and to assist in creating a secure environment for the delivery of humanitarian aid. As part of its duties, AMISOM also supports the Federal Government of Somalia's forces in their battle against Al-Shabaab militants.

Burdhubo is a town in the southern Gedo region of Somalia. It is the center of the Burdhubo District. 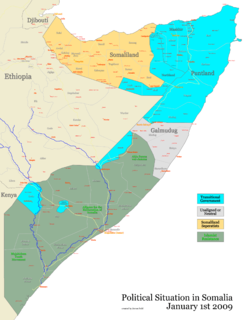 The 2009–present phase of the Somali Civil War is concentrated in southern and central Somalia. It began in early February 2009 with the conflict between the forces of the Federal Government of Somalia, assisted by African Union peacekeeping troops, and various militant terrorist groups and factions. The violence has displaced thousands of people in the southern part of the country. The conflict has also seen fighting between the Sufi Ahlu Sunna Waljama'a and Al-Shabaab.

The Battle of Mogadishu (2010–2011) began on 23 August 2010 when al-Shabaab insurgents began attacking government and African Union Mission to Somalia (AMISOM) positions in the Somali capital of Mogadishu. Al-Shabaab began its offensive after its spokesman said the group was declaring a "massive war" on troops sent by AMISOM, describing its 6,000 peacekeepers as "invaders". In December 2010 the number of AMISOM troops was increased to 8,000 and later to 9,000. The battle's name usually includes the years, when referenced, in order to distinguish it amongst the nine major Battles of Mogadishu during the decades long Somali Civil War.

Burdhubo District, also spelled Buurdhuubo, is a district in the southwestern Gedo region of Somalia. Its capital lies at Burdhubo.

The Battle of Gedo is a conflict of the 2009–present phase of the Somali Civil War. Centered in the region of Gedo, it pits the Somali government and its allies against the al-Qaeda-aligned militant group Al-Shabaab.

Buloburde, also spelled Buloburti or Bulobarde, is a City in the central Hiran region of Somalia. 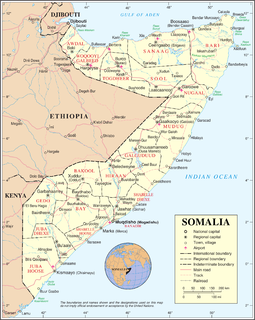 Rab Dhuure, also known as Rabdhure, is a town in the southwestern Bakool region of Somalia.

Operation Indian Ocean was a joint military operation between the Somali military, AMISOM and the United States military against the Al-Shabaab militant group in southern Somalia. It officially began in August 2014.

This article contains a timeline of events for the Somali militant group Al-Shabaab.