Balūchī (also Baluchi and Balūči) is a town in Herat Province, Afghanistan.

Baluchi may refer to:

Corella is a town and municipality with 7,753 people (2014), located in the province of Navarre, northern Spain, and close to Tudela. Corella is well known for its wine. 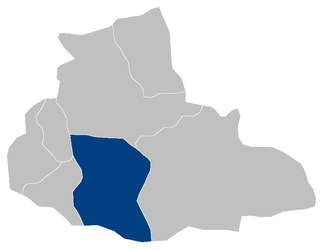 Aleksandrowice is a village in the administrative district of Gmina Wińsko, within Wołów County, Lower Silesian Voivodeship, in south-western Poland. Prior to 1945 it was in Germany.

Balūchī is a town in Helmand Province, Afghanistan.

Krywka is a former village in the administrative district of Gmina Lutowiska, within Bieszczady County, Subcarpathian Voivodeship, in south-eastern Poland, close to the border with Ukraine. It lies approximately 3 kilometres (2 mi) east of Lutowiska, 22 km (14 mi) south-east of Ustrzyki Dolne, and 101 km (63 mi) south-east of the regional capital Rzeszów.

Azizabad is a village in the Shindand district, Herat Province, Afghanistan. 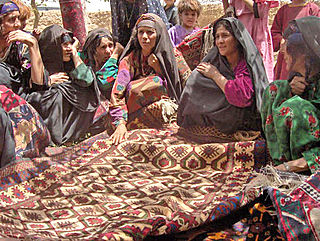 An Afghan rug is a type of handwoven floor-covering textile traditionally made in Afghanistan. Many of the Afghan rugs are also woven by Afghan refugees who reside in Pakistan. In 2008, 2013, and 2014, Afghan rug won international awards, which is held every year in Hamburg, Germany. The Afghan rugs are mostly assembled in northern and western Afghanistan, by various ethnic groups but mainly by Turkmen.

Kaman-Kalehöyük is a multi-period archaeological site in Kırşehir Province, Turkey, around 100 km south east of Ankara 6 km east of the town center of Kaman. It is a tell or mound site that was occupied during the Bronze Age, Iron Age and Ottoman periods. Since 1986 it has been investigated by archaeologists from the Middle Eastern Culture Center in Japan.

The Gâm River is a river which derived from the Guangxi, China.

Nowbandian-e Baluchi is a village in Negur Rural District, Dashtiari District, Chabahar County, Sistan and Baluchestan Province, Iran. At the 2006 census, its population was 457, in 90 families.