Baladiyah (Arabic : بلدية‎) is a type of Arabic administrative division that can be translated as "district", "sub-district" [1] or "municipality". [2] The plural is baladiyat (Arabic : بلديات‎). Grammatically, it is the feminine of بلدي "rural, country-, folk-".

The Arabic term amanah (أمانة) is also used for "municipality". [3]

In Turkish, the word belediye (definite accusative belediyesi), which is a loan from Arabic, means "municipality" or "city council".

Al Rayyan is the third-largest municipality in the state of Qatar. Its primary settlement is the city of the same name, which occupies the entire eastern section and largely surrounds Metropolitan Doha and functions as a suburb. The vast expanse of mostly undeveloped lands in the south-west also falls under the municipality's administration.

Shabiyah is an administrative division of Libya. It is often translated as popularate, but also as "municipality" or "district".

Al-Ittihad Sports Club of Aleppo is a professional multi-sports club based in the Syrian city of Aleppo, mostly known for its football team which competes in the Syrian Premier League, the top league of Syrian football. Being one of the most successful clubs in Syrian football history, Al-Ittihad won six Syrian football league titles and nine Syrian cups. In Asia, their best performance was in 2010 when they became champions of AFC Cup competition.

Tripoli District is one of the 22 first level subdivisions (بلدية) of Libya. Its capital and largest city is Tripoli, the national capital. Tripoli District is in the Tripolitania region of northwestern Libya. The district has a shoreline along the coast of the Mediterranean Sea in the north, Zawiya in the west, Jafara in the southwest, Jabal al Gharbi in the south and Murqub in the east.

Unaizah Municipality is the headquarters of the Metropolitan area of Unaizah, Saudi Arabia.

Al-Yarmouk Sports Club is a Syrian sports club based in Aleppo, best known for their football. Founded in 1925, Al-Yarmouk is the 2nd oldest sports organization in Syria. The club have won the Syrian regions football championship for several times before the establishment of the official Syrian football league in 1966. They were the winners of the Syrian Cup in 1963–1964, being the only official achievement in the club's history. Between 1925–1946, Al-Yarmouk was known as Homenetmen Aleppo. In 1946, the name was changed to Al-Nadi As-Souri until 1971 when it was renamed Al-Yarmouk. The club play their home games at the 7 April Municipal Stadium. 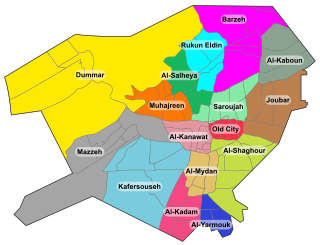 Al Utouriya is a village in Qatar, located in the municipality of Al-Shahaniya. The village is located about 20 kilometres (12 mi) north of Al-Shahaniya City and the same distance south of Al Jemailiya. It is connected to both places by road. 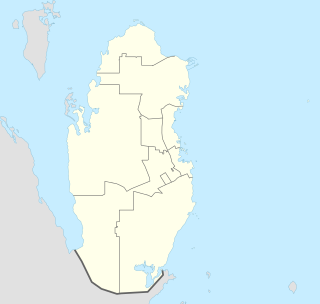 Zakrit is a town located in Matn, Mount-Lebanon, Lebanon. No official census has been done but local estimates range slightly less than 4500. Zakrit lies on the western slope of Mount-Lebanon overlooking the Mediterranean Sea and the city of Jounieh. This small Lebanese town is predominantly Maronite Catholic. 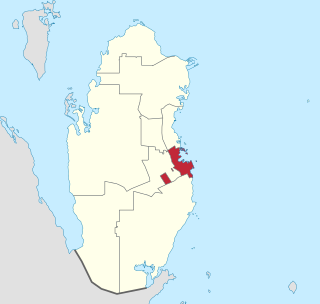 Ad-Dawhah is the one of the eight municipalities of Qatar. It is the most populous municipality with a population of 956,457, all of whom live in Qatar's capital city, Doha.

Wadi Al Wasaah is a village in the municipality of Al Daayen in Qatar. It is bordered by the Umm Salal Municipality to west, Rawdat Al Hamama to the east and Al Sakhama to the north.

Jernaya is a municipality located in South Lebanon, on the border between the districts of Jezzine and Nabatiyeh. Its inhabitants are primarily Maronite Catholics.

Baladiyat Al-Basra Sport Club, is an Iraqi football team based in Al-Saie District, Basra, that plays in Iraq Division one.

Qaaqaaiyet El Snoubar is a village in Sidon District, South Governorate, Lebanon. It is located southeast of Sidon, and is considered an "extension" of the villages of Jabal Amel. The population is of about 3,000 inhabitants.