The Baldwin DR-4-4-15 was a 1,500-horsepower (1,100 kW) cab unit-type diesel locomotive built for freight service by the Baldwin Locomotive Works between November 1947 and June 1950. It was produced in two different body types, nicknamed the "Babyface" and " Sharknose " styles by railfans, though Baldwin used the same model number for both. 22 "Babyface" cab-equipped A units were built, along with 11 cabless booster B units; 36 "Sharknose" A units and 36 B units were constructed, making a total for all models of 105 locomotives built. 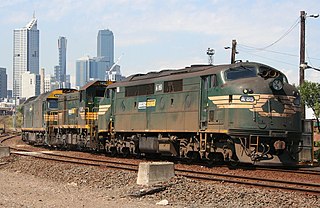 A cab unit and a carbody unit are body styles of locomotives in North American railroad terminology. While closely related, they are not exactly the same. A carbody unit may be either a cabless booster unit controlled from a linked cab unit, or a cab unit that contains its own controls. 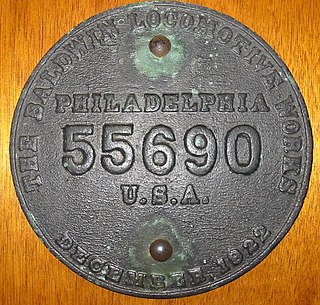 The Baldwin Locomotive Works (BLW) was an American manufacturer of railroad locomotives from 1825 to 1956. Originally located in Philadelphia, it moved to nearby Eddystone, Pennsylvania, in the early 20th century. The company was for decades the world's largest producer of steam locomotives, but struggled to compete as demand switched to diesel locomotives. Baldwin produced the last of its 70,000-plus locomotives in 1956 and went out of business in 1972.

The Baldwin DR-12-8-1500/2 was the Baldwin Locomotive Works' first serious attempt at a production road diesel locomotive. The Baldwin type designation was 'DR-12-8-1500/2,' meaning Diesel Road locomotive, with 12 axles, and two engines of 1,500 horsepower (1,100 kW) each. The trucks were configured in a 2-D+D-2 wheel arrangement. The nickname came from the numerous axles set in a nearly unbroken line, much like the legs of a centipede.

The E9 is a 2,400-horsepower (1,790 kW), A1A-A1A passenger train-hauling diesel locomotive built by General Motors' Electro-Motive Division of La Grange, Illinois between April 1954 and January 1964. 100 cab-equipped A units were produced and 44 cabless booster B units, all for service in the United States. The E9 was the tenth and last model of EMD E-unit and differed from the earlier E8 as built only by the newer engines and a different, flusher-fitting mounting for the headlight glass, the latter being the only visible difference. Since some E8s were fitted with this, it is not a reliable way to distinguish the two.

A B unit, in railroad terminology, is a locomotive unit which does not have a driving cab or crew compartment, and must therefore be controlled from another, coupled locomotive with a driving cab. The terms booster unit and cabless are also used. The concept is largely confined to North America. Elsewhere, locomotives without driving cabs are rare. 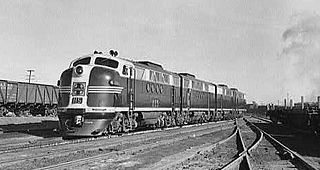 The EMD FT is a 1,350-horsepower (1,010 kW) diesel-electric locomotive that was produced between March 1939 and November 1945, by General Motors' Electro-Motive Corporation (EMC), later known as GM Electro-Motive Division (EMD). The "F" stood for Fourteen Hundred (1400) horsepower and the "T" for Twin, as it came standard in a two-unit set. The design was developed from the TA model built for the C,RI&P in 1937, and was similar in cylinder count, axle count, length and layout. All told 555 cab-equipped ”A” units were built, along with 541 cabless booster or ”B” units, for a grand total of 1,096 units. The locomotives were all sold to customers in the United States. It was the first model in EMD's very successful F-unit series of cab unit freight diesels, and was the locomotive that convinced many U.S. railroads that the diesel-electric freight locomotive was the future. Many rail historians consider the FT one of the most important locomotive models of all time.

EMD F-units were a line of diesel-electric locomotives produced between November 1939 and November 1960 by General Motors Electro-Motive Division and General Motors-Diesel Division. Final assembly for all F-units was at the GM-EMD plant at La Grange, Illinois and the GMDD plant in London, Ontario, Canada. They were sold to railroads throughout the United States, Canada, Mexico and a few were exported to Saudi Arabia. The term F-unit refers to the model numbers given to each successive type, all of which began with the letter F. The "F" originally meant Fourteen, as in 1,400 horsepower, not F as in Freight. Longer EMD E-units for passenger service had twin 900 horsepower diesel engines. The "E" meant Eighteen as in 1,800 horsepower. Similarly, for early model EMD switchers "S" meant Six hundred and "N" meant Nine hundred horsepower.

The EMD F9 is a 1,750 horsepower (1,300 kW) Diesel-electric locomotive produced between February 1953 and May 1960 by the Electro-Motive Division of General Motors (EMD) and General Motors Diesel (GMD). It succeeded the F7 model in GM-EMD's F-unit sequence. Final assembly was at GM-EMD's La Grange, Illinois plant. The F9 was also built in Canada by General Motors Diesel at their London, Ontario plant. A total of 99 cab-equipped lead A units and 156 cabless booster B units were built. The F9 was the fifth model in GM-EMD's highly successful "F" series of cab unit diesel locomotives. 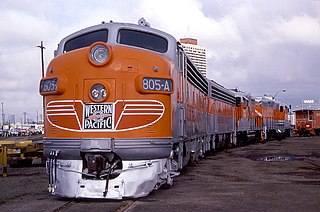 The EMD FP7 is a 1,500 horsepower (1,100 kW), B-B dual-service passenger and freight-hauling diesel locomotive produced between June 1949 and December 1953 by General Motors' Electro-Motive Division and General Motors Diesel. Final assembly was at GM-EMD's La Grange, Illinois plant, excepting locomotives destined for Canada, in which case final assembly was at GMD's plant in London, Ontario. The FP7 was essentially EMD's F7A locomotive extended by four feet to give greater water capacity for the steam generator for heating passenger trains.

The EMD MP15DC was a 1,500 hp (1,100 kW) switcher-type diesel locomotive model produced by General Motors' Electro-Motive Division between March 1974 and January 1983. 351 examples were built. An MP15AC variant, with an AC drive, was also offered. Between August 1975 and August 1984 246 MP15ACs were built, including 25 for export to Mexico, and four built in Canada. The MP15DC replaced the SW1500 in EMD's catalog, and is superficially very similar to the predecessor model, using the same engine in a similar design of hood and bodywork. The primary difference is the MP15’s standard Blomberg B trucks.

The EMD MP15AC is a 1,120 kW (1,502 hp) diesel switcher/road-switcher locomotive built by General Motors' Electro-Motive Division between August 1975 and August 1984. A variant of the EMD MP15DC with an AC transmission, 246 examples were built, including 25 for export to Mexico, and four built in Canada. 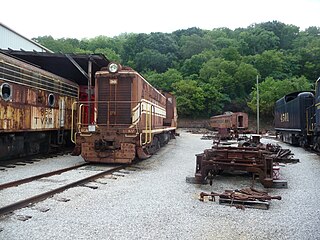 The Baldwin VO-1000 was a diesel-electric locomotive (switcher) built by Baldwin Locomotive Works between January 1939 and December 1946. The 236,260–242,200 lb (107,170–109,860 kg) units were powered by a normally aspirated eight-cylinder diesel engine rated at 1,000 horsepower (746 kW), and rode on a pair of two-axle trucks in a B-B wheel arrangement. These were either the AAR Type-A switcher trucks, or the Batz truck originally developed by the Atchison, Topeka and Santa Fe Railway as a leading truck for steam locomotives. 548 examples of this model were built for American railroads, including examples for the Army and Navy.

The Baldwin VO-660 was a diesel-electric locomotive switcher built by Baldwin Locomotive Works between April, 1939 and May, 1946. The 197,520–203,980 lb units were powered by a six-cylinder diesel engine rated at 660 horsepower, and rode on two-axle AAR Type-A switcher trucks in a B-B wheel arrangement. 142 examples of this model were built for American railroads, along with the United States Navy. Baldwin replaced the VO-660 with the model DS-4-4-660 in 1946. 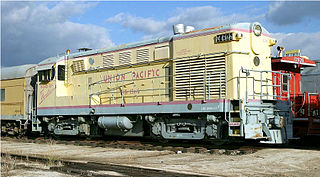 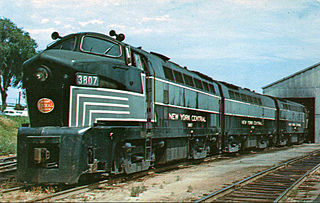 Sharknose is a term applied by railfans to the styling of several cab unit diesel locomotives built by the Baldwin Locomotive Works to the specifications of the Pennsylvania Railroad. The styling was by the PRR's preferred designer, Raymond Loewy, with the distinctive nose reminiscent of his design for the PRR T1 steam locomotive.

The Baldwin RF-16 was a 1,600-horsepower (1,200 kW) cab unit-type diesel locomotive built for freight service by the Baldwin Locomotive Works between 1950 and 1953. All RF-16s were configured with a B-B wheel arrangement and ran on two AAR Type B two-axle road trucks, with all axles powered. A total of 109 cab-equipped A units were built, along with 51 cabless booster B units, for a total of 160 locomotives built. As was the case with most passenger locomotives of its day, the RF-16s came equipped with a retractable, nose-mounted drop coupler pilot. Unlike competing units from EMD and Alco, the RF-16 used an air-powered throttle, meaning that it could not be run in MU operation with EMD or Alco diesels without special MU equipment.

The RS1325 was a North American locomotive model built by General Motors Electro-Motive Division, having characteristics of both a switcher and a roadswitcher. Only two units were built.

The Baldwin RT-624 was a twin-engined diesel-electric locomotive, built by Baldwin Locomotive Works between 1951 and 1954.