Bali Ram Bhagat (7 October 1922 –2 January 2011) was an Indian politician and member of the Indian National Congress. He was born in a Yadav Family at Patna, Bihar.

Bhagat joined the Indian National Congress in 1939 during the Indian independence movement and participated in the Quit India movement. He received a bachelor's degree from Patna College and obtained a master's degree in Economics from Patna University. [1]

After independence, he served as the Member of Parliament from Arrah for six terms including the first five terms. [2] Bhagat lost his seat to Chandradeo Prasad Verma in the 1977 general election, where the Congress lost power in India for the first time. [3]

Bhagat served as the Speaker of Lok Sabha from 1976 to 1977, during the turbulent final year of Indira Gandhi’s first reign as prime minister. [2] He served as Minister for External Affairs of India under Indira's son, Rajiv Gandhi, from 1985 to 1986. He was governor of Himachal Pradesh briefly during 1993, and governor of Rajasthan from 1993 to 1998. Bali Ram Bhagat died in New Delhi on 2 January 2011. [1] 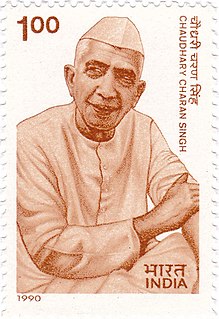 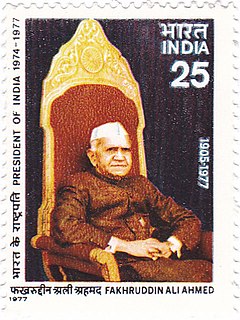 Neelam Sanjiva Reddypronunciation (help·info) was the sixth President of India, serving from 1977 to 1982. Beginning a long political career with the Indian National Congress Party in the Indian independence movement, he went on to hold several key offices in independent India—as the first Chief Minister of Andhra Pradesh, a two-time Speaker of the Lok Sabha and a Union Minister—before becoming the youngest-ever Indian president.

Shivraj Vishwanath Patil is an Indian politician who was the Governor of the state of Punjab and Administrator of the Union Territory of Chandigarh from 2010 to 2015. Previously, he was the Speaker of the 10th Lok Sabha from 1991 to 1996 and served in Manmohan Singh's cabinet as Union Minister of Home Affairs from 2004 to 2008. He also served in the Indira Gandhi and Rajiv Gandhi cabinets as Minister of Defence during the 1980s. 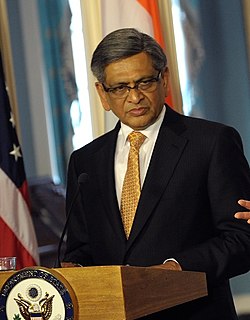 Somanahalli Mallaiah Krishna is an Indian politician who served as Minister of External Affairs of India from 2009 to October 2012. He was the 16th Chief Minister of Karnataka from 1999 to 2004 and the 19th Governor of Maharashtra from 2004 to 2008. SM Krishna had served as the Speaker of the Karnataka Vidhan Sabha from December 1989 to January 1993. He was also a member of Lok Sabha and Rajya Sabha at various times from 1971 to 2014.

This is a partial listing of prominent political families of India.

Sushma Swaraj was an Indian politician and a Supreme Court lawyer. A senior leader of Bharatiya Janata Party, Swaraj served as the Minister of External Affairs of India in the first Narendra Modi government (2014–2019). She was the second woman to hold the office, after Indira Gandhi. She was elected seven times as a Member of Parliament and three times as a Member of the Legislative Assembly. At the age of 25 in 1977, she became the youngest cabinet minister of Indian state of Haryana. She also served as 5th Chief Minister of Delhi for a short duration in 1998.

List of Members of the 5th Lok Sabha, elected February–March 1971. The Lok Sabha is the lower house in the Parliament of India. 4 sitting members from Rajya Sabha were elected to 5th Lok Sabha after the 1971 Indian general election.

Satyendra Narayan Sinha was an Indian statesman, participant in the Indian independence movement, a leading light of Jaya Prakash Narayan’s ‘complete revolution’ movement during the Emergency and a former Chief Minister of Bihar. Affectionately called Chhote Saheb, he was also a seven-time Member of Parliament from the Aurangabad constituency, a three-term Member of the Bihar Legislative Assembly, and a Member of the Bihar Legislative Council once. Regarded to be one of India's most influential regional people of the time, his reputation was synonymous with being a strict disciplinarian and tough taskmaster.

Punjala Shiv Shankar was an Indian politician. He served as the Minister of External Affairs, Law, and Petroleum. He was a very influential minister in Indira Gandhi's and Rajiv Gandhi's cabinets and was one of the most senior politicians in India. He also served as Governor of Sikkim from 1994 to 1995 and Governor of Kerala from 1995 to 1996.

Shyam Nandan Mishra was an Indian politician. He was born at Gonawan, Patna, India in October 1920 and was educated at Sursand, Muzaffarpur and Law College, Patna.

Tarkeshwari Sinha was an Indian politician and Indian independence movement activist from Bihar. Among the first female politicians of the country, she took active role in the Quit India Movement. At the age of 26, she was elected to the 1st Lok Sabha from Patna East constituency in 1952. Subsequently, she was re-elected to the Lok Sabha in 1957, 1962 and 1967 from Barh constituency. She was the first female Deputy Finance Minister in the union cabinet led by prime minister. Jawaharlal Nehru from 1958-64. She had also led a delegation to the U.N. and Tokyo. Gulzar’s critically acclaimed movie, Aandhi was partly inspired by Tarkeshwari Sinha, apart from Indira Gandhi.

The Nehru–Gandhi Family is an Indian political family that has occupied a prominent place in the politics of India. The involvement of the family has traditionally revolved around the Indian National Congress, as various members have traditionally led the party. Three members of the family Jawaharlal Nehru, Indira Gandhi, and Rajiv Gandhi have served as the Prime Minister of India, while several others have been members of the parliament.

Chandra Shekhar was an Indian politician who served as the eighth Prime Minister of India, between 10 November 1990 and 21 June 1991. He headed a minority government of a breakaway faction of the Janata Dal with outside support from the Indian National Congress as a stop gap arrangement to delay elections. He is the first Indian Prime Minister who has never held any Government office. His government was largely seen as a "puppet" and "lame duck" and the government was formed with the fewest party MPs in the Lok Sabha. His government could not pass the budget at a crucial time when Moody had downgraded India and it further went down after the budget was not passed and global credit-rating agencies further downgraded India from investment grade making it impossible to even get short term loans and in no position to give any commitment to reform, the World Bank and IMF stopped their assistance. Chandrasekhar had to authorise mortgaging of gold to avoid default of payment and this action came in for particular criticism as it was done secretly in the midst of the election. The Indian economic crisis, 1991, and the Assassination of Rajiv Gandhi plunged his government into crisis.

Ram Dulari Sinha was a nationalist, freedom fighter Indian National Congress, Indian parliamentarian and a Union Minister.She was married with Thakur Jugal Kishore Singh of Dumri Belahi, Sitamarhi. She was elected Vice Chairman of the International Labour Organization, was the first woman in Bihar to gain a master's degrees and also the first woman from Bihar to be appointed as Governor when she became Governor of Kerala from 23 February 1988 to 12 February 1990.

Mohan Dharia was a Union minister, a lawyer and social worker. During his last days he stayed in Pune. Dharia was an environmentalist and ran a non-government organisation Vanrai. He was elected to the Lok Sabha twice from Pune Lok Sabha constituency, first in 1971 as an Indian National Congress (INC) member and became a Minister of State, and later in 1977 as a Bharatiya Lok Dal member, and joined the Morarji Desai Ministry as Union Minister of Commerce. Prior to it, he remained member of the Rajya Sabha twice from INC, first 1964-1970 and then 1970- 1971 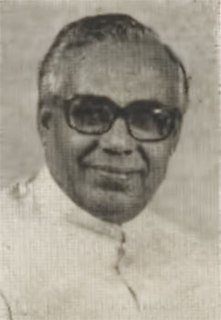 Kedar Pandey was an Indian freedom fighter and Indian National Congress politician, who remained the Chief Minister of Bihar from March 1972 to 2 July 1973, and Minister of Railways in the Union Cabinet from 12 November 1980 to 14 January 1982 as a part of the Government of India.